The Windows Subsystem for Linux (WSL) seems to be mature enough now to give it another shot. Copy and paste, and other simple annoyances that kept me away before are working better. Also, I've been reading that nvm (Node Version Manager) works now, so here goes.

The following has been tested on Windows 10 Professional (version 1709, build 16299.309) with WSL enabled and Ubuntu installed from the Windows Store. It's also working fine on the current May 2019 Update, version 1903.

Windows update does not change the WSL Ubuntu installation. To upgrade to a new release, run sudo do-release-upgrade in the Ubuntu Terminal.

Oh My Zsh will spruce up your Ubuntu bash and add some additional functionality. Here is a screenshot of my Ubuntu app to illustrate.

Install Oh My Zsh just as you would on any other ubuntu system. Note that Zsh is a pre-requisite. For installation instructions and more information, visit https://github.com/robbyrussell/oh-my-zsh. 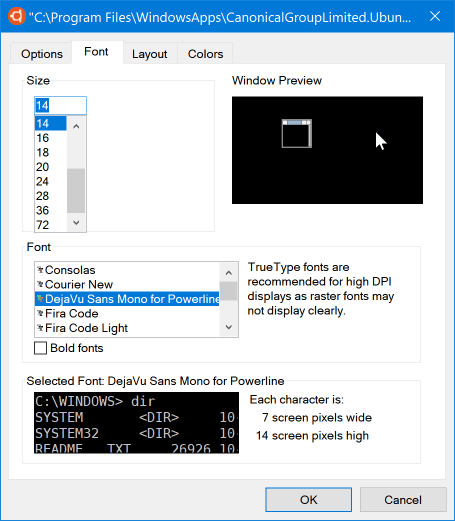 To set WSL Ubuntu bash with zsh as your integrated terminal in VS Code. Update your user settings file, e.g., %appdata%\Code\User\settings.json with the following.

If you want to use your existing git and/or other ssh keys, copy them from their folder in Windows into a .ssh folder under ubuntu. For example,

nvm is a utility for installing and managing multiple versions of node.js.

Then load as a plugin in your .zshrc profile. Note that plugins need to be added before oh-my-zsh.sh is sourced. For example, here is a snippet from my .zshrc profile.

If you want to install Yarn, use apt-get install --no-install-recommends yarn. By default, Yarn installs nodejs as a system-wide dependency.

After updating your .zshrc profile to load the nvm plugin, close and re-open the Ubuntu app and to install nvm when the plugin is loaded for the first time.

One the install has completed, you can verify by running nvm which should output the nvm --help contents.

Install the latest LTS version of Node.js which at the time of this writing is version 8.11.1

If you want to upgrade npm, use nvm install-latest-npm.

Mount a drive such as a USB flash drive formatted as FAT, ExFAT or NTFS. For example, a drive listed as F:\ in Windows would be mounted as follows.

Bind a custom mount for any drives you want to access. For example, the C drive. This is also required should you want to use Docker volume mount paths as described in this post by Nick Janetakis.

Included in Windows 10 version 1803 (April 2018 Update) is support for WSL launch configuration. The /etc/wsl.conf file contains settings for drive mounting and network configuration. Read the Microsoft Developer blog post, Automatically Configuring WSL for more information on how to use wsl.conf

Create the /etc/wsl.conf file and set root = / so you can access drives with /c or /e instead of /mnt/c and /mnt/e.

If you want to browse the files using Windows Explorer and/or backup the root file system, the location of these files is in the hidden AppData folder. For example:

VS Code Tip of the Week: 3-way Merge Editor

Convert SVGs from Stroke to Path

Once suspended, jimfrenette will not be able to comment or publish posts until their suspension is removed.

Once unsuspended, jimfrenette will be able to comment and publish posts again.

Once unpublished, all posts by jimfrenette will become hidden and only accessible to themselves.

If jimfrenette is not suspended, they can still re-publish their posts from their dashboard.

Once unpublished, this post will become invisible to the public and only accessible to Jim Frenette.

Thanks for keeping DEV Community 👩‍💻👨‍💻 safe. Here is what you can do to flag jimfrenette:

Unflagging jimfrenette will restore default visibility to their posts.