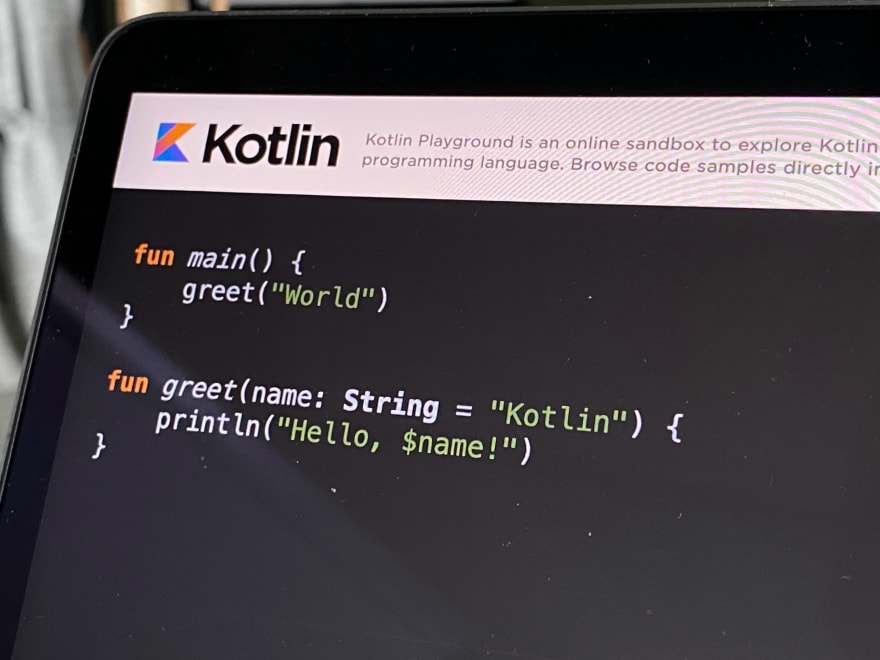 TL;DR : Kover is a code coverage tool for Kotlin. It's still in incubator phase but I took it for a spin and it is already very useful as part of local or CI workflows! In this article I go through the setup and some of my favourite goodies of the tool. You can see my experiment over here.

A couple weeks back, the version 1.6.0 of Kotlin was officially released! The release was packed with new language features, but also some very nice tooling and ecosystem goodies.

Today, we're looking into one of them : Kover. Kover is a Gradle plugin for native Kotlin code coverage. It is still in incubator phase, but we'll see here that it already has quite some value for your Kotlin projects!

If you're a JVM developer, you're probably used to those HTML/XML report files so you usually feed into a system like SonarQube or CodeCov to track metrics over time. Well Kover is fully compatible with the JaCoCo format so you can keep making full use of those, and even couple them in case you have multiple projects in different JVM languages.

Let's give Kover a spin and see what we can do with it! For this experiment, I'll be using the Kotlin flavor of the very famous Spring Pet Clinic.

Once that is done, you will have access to several new gradle tasks, which you can find in the verification section

Running ./gradlew koverReport will generate coverage files in XML and HTML format, in the same way you'd be doing it using JaCoCo. After running the task, you'll find your new reports in build/reports/kover. Opening up html/index.html will give you information in a human readable format.

This is how the report look like when running the task on the spring pet clinic project :

An HTML report with total coverage, and coverage breakdown per package

About the Kover gradle tasks

As we can see by using the taskinfo gradle plugin (which is used to see the relations between gradle tasks), there is no need to specifically run the kover tasks because they are transitively called by other tasks already.

I am cutting this here for brevity but when running the taskinfo plugin for the build task we can see that it runs check which himself runs koverReport and koverVerify (we'll talk about this one in a second).

Relations between gradle tasks, and kover tasks being run automatically when building the project

Of course, this is something we may not want, for example to avoid slowing down the build for large projects (or as we'll see later to avoid the build form failing). We can skip those targets when build like this :

One of the nice goodies that I really like from Kover is the koverVerify task.

koverVerify literally allows you to make the build fail (or pass) based on a set of predefined rules. There are a few to choose from (total line count of line covered, percentage, ....)

This basically tells koverVerify to make the build fail in case the code coverage of the project goes under 98%. Whether or not setting hard values is a discussion for another day, but at least there is a simple way to go about it.

In case you rather want to look into trends ( this new pull requests lowers the code coverage), then you'll have to rely on external tools like CodeCov. That's what we'll look into now.

Having code coverage in your project is nice by itself, but seeing trends over time and using that information as part of your workflow is much more interesting.

In the project, I've used a combination of GitHub Actions and CodeCov to do this.

In my workflow, I have decided to use 2 different builds:

Let's start with my rules :

Not much to say here. I am setting up a typical build for a gradle project, the other thing I am doing is run the koverVerify task at the end.

Again, not very much happening here. A couple of noticeable things though :

When opening a Pull Request on GitHub, this allows for the following overview :

But because I am running 2 different action files, I also get extra (clickable) information from CodeCov directly as to where I should be doing better: 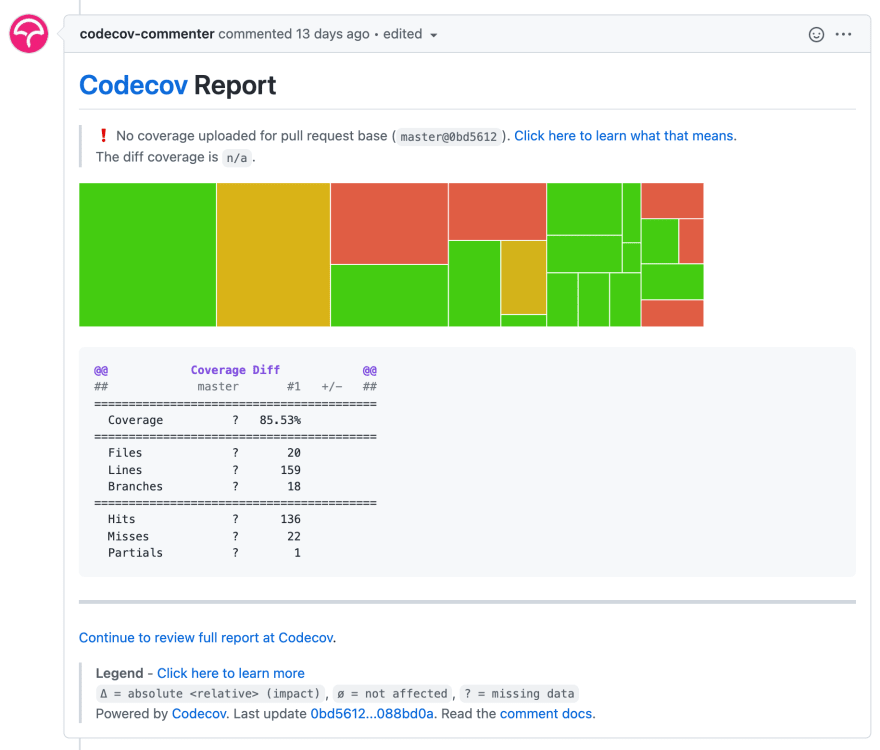 CodeCov report in my Pull Request with diff coverage

About the IntelliJ "Run with code coverage"

In case you want to have code coverage information straight from IntelliJ, this is already possible without Kover.

In your run configuration, you can select "More Options" and decide to use the IntelliJ or JaCoCo agents there: 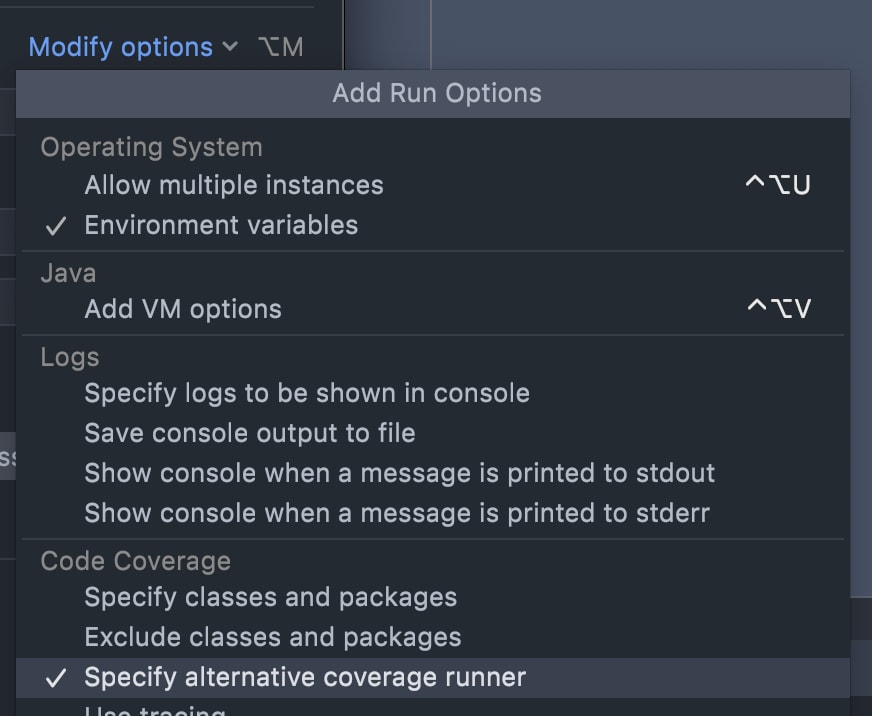 Then, you can tell IntelliJ to run your tests with coverage like this

The IntelliJ website has a whole page dedicated to code coverage so I'm not going to cover (pun intended) it here. you can read more about it here.

The good thing to know though is that when running code coverage straight from IntelliJ, well by definition it isn't part of the build and it runs only on your system. But there (to my knowledge) also isn't an easy way to set a set of rules for success/failure.

Why not run JaCoCo?

Some folks might wonder why Kover is actually needed. After all, Kotlin runs on the JVM and you could run straight JaCoCo on your Kotlin projects before. Well, JetBrains has a video that explains it better than I can in this video, but in short the support for Kotlin specific feature is subpar when running the tool on bytecode.

Anyone that has tried to run static code analysis on bytecode knows what I'm talking about I think :).

In short I'm super happy that this 1.6 release doesn't only focus on the ecosystem but also the tooling. Having a dedicated code coverage tool makes a lot of sense for Kotlin and I'm sure it will fill a gap in a lot of teams.

The current plugin is rather simple but contains all of the options that I would be searching for in my projects (have a look at the doc, I didn't cover them all). And even though the project is still in early phase, I haven't seen any scary looking issues pop up so far, so it seems to have a great future!

So welcome Kover, looking forward to using you more!

You can find the source of the project I used on GitHub, with a (failing) open Pull Request for show

To Flow or not to Flow? Message subscription in Kotlin.

Once suspended, jlengrand will not be able to comment or publish posts until their suspension is removed.

Once unsuspended, jlengrand will be able to comment and publish posts again.

Once unpublished, all posts by jlengrand will become hidden and only accessible to themselves.

If jlengrand is not suspended, they can still re-publish their posts from their dashboard.

Once unpublished, this post will become invisible to the public and only accessible to Julien Lengrand-Lambert.

Thanks for keeping DEV Community 👩‍💻👨‍💻 safe. Here is what you can do to flag jlengrand:

Unflagging jlengrand will restore default visibility to their posts.