While ago, I’ve been building F# library for the Bitcoin Lightning Network (LN), DotNetLightning.
After (barely) finishing my first iteration, I’ve noticed that there is a more matured library called rust-lightning for doing the same for the rustlang, and I’ve switched my efforts to its .NET binding with C#
After working for both F# and C# for a decent amount of time, I noticed that it both has goodies and baddies for different domains.
One particular domain I think that F# is a clear winner is for prototyping a new idea.

So today, I will sketch out my recent idea about Bitcoin and how I use F# to organize my thoughts in my head.

But before that, I have to describe the overview about bitcoin smart contract and my thoughts about it.

What is a Smart contract?

1. Smart contract as a scripting language

The word “Smart contract” is mostly used to refer to a byte code which is executed on the blockchain as a part of the consensus mechanism, and sometimes including a programming environment to write that byte code.
One example of this is Solidity on Ethereum which compiles to the EVM byte code.

The bitcoin has a similar construction (bitcoin script) which is intentionally made less descriptive than the EVM byte code. and there is a proposal for a high level language which compiles down to the actual bitcoin script, namely Miniscript and its predecessor ivy-bitcoin BitML

However, at the same time at least in the Bitcoin community there is a consensus that writing a secure byte code is just a very little part of building the secure multi-party protocol.

2. Smart contract as a multi-party procedure

Recently, the trend is to bring the statefulness to outside of the blockchain, and use the blockchain as a “dumb” settlement layer. Which makes sense in terms of privacy and scalability.

In other words, the "smartness" of the contract is not in the blockchain but in the procedure among related party.

To note a few keywords for such trend, there is a Scriptless Scripts, Lightning Network (LN) , Discreet Log Contract DLC, etc.

All these contracts are defined as a set of procedure among multi-party (in most case, two-party)
For example something like

Such a way of defining the contract is secure and fine. But can we achieve more generality somehow? If we could make some kind of universal language to describe the “shape” of the contract, it would be a good mental model for protocol developers to build/communicate new Smart contracts.

3. Smart contract as a Transaction graph

At the same time, there is an old proposal by Jeremy Rubin called TXGL , which defines not only the script for the contract but also the shape of whole transactions which could be involved in the contract. This is great as a mental model for the developers, but in reality it is not enough. Because, some transactions are related with each other outside of the shape (e.g. by Adaptor Signature) and those relations will affect how we communicate with each other in course of the contract.

So, my hypothetical objective is

This is a very bold claim to make. And it might be impossible or overkill. But I have to try to make a PoC to see if it is really so.

The idea is affected by a proposal named Improv, which achieves something similar with the Miniscript but for a payment on the Lightning Network.
It is supposed to look similar to the Miniscript but compiles down to a multi-party-procedure instead of the byte code.

So, let’s first survey existing proposed contracts, and try to abstract properties of those.

Note for readers those familiar to the bitcoin protocol: I assume we are able to use Taproot and PTLC

It seems that most, if not every, on-chain contract has roughly three phases

My purpose here is to define the language to describe 1 and 2, and deterministically generate 3 from it.
So, hopefully I can describe a contract with a set of transaction graphs. and the relation of the transactions in each graph.

With that in mind, let’s make a graphical model for Atomic swap with an adaptor signature. I won’t go into the details about the protocol.. The model will be something like 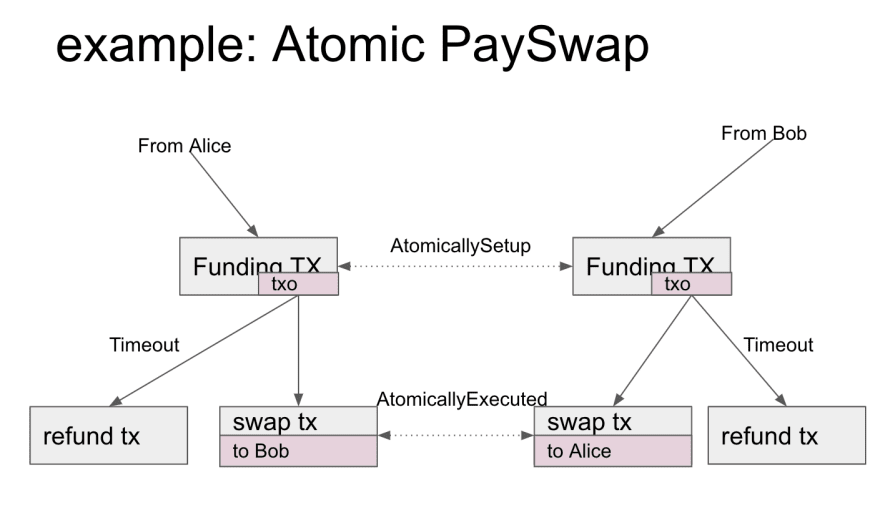 Similarly, the model for SAS: Succinct Atomic Swap will be 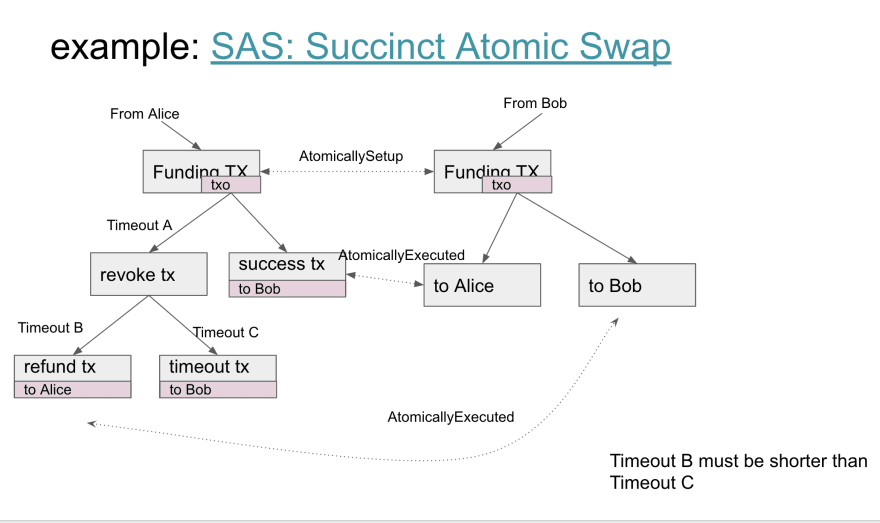 Then let’s model these relations using F# type. We are going to use NBitcoin to represent Bitcoin specific classes, and my own DotNetLightning off-chain specific types.

Let’s say we call each node in the above graph TxEntry,

The Contract is a set of graph of the TxEntry, so let’s define it as

The mechanism of off-chain payment is quite different from those of on-chain, but some operations are analogous. (e.g. “we must commit to payment atomically to prevent option problem” or “Iff one payment is executed, another payment must be able to execute”).

So we can use a similar terminology to describe the contract.
See below table for how the “relation” of each entry is achieved in both on-chain and off-chain.

So for example, Submarine swap in the graphical representation could be.

So next let’s include the concept of an “off-chain” entry into the above code. It will be like

This is a very rough sketch of my recent thoughts, and it is still in an early phase.

The next step will be to define the function to compile the Contract object to an actual state machine to handle the procedure of an interaction with the another party (and the blockchain), that is, function with the type

That is the most difficult part, and I will probably change the definition of the Contract on the way.

What I want to point out here is that in the research phase like this, it is important for me to define an algebraic data type in a succinct way so that I can alter the definition while I go back and forward with an implementation.

In other words, F# is very nice tool for Exploratory programming

What is an INTERFACE in JAVA? w/ examples

Once suspended, joemphilips will not be able to comment or publish posts until their suspension is removed.

Once unsuspended, joemphilips will be able to comment and publish posts again.

Once unpublished, all posts by joemphilips will become hidden and only accessible to themselves.

If joemphilips is not suspended, they can still re-publish their posts from their dashboard.

Once unpublished, this post will become invisible to the public and only accessible to Joe Miyamoto.

Thanks for keeping DEV Community 👩‍💻👨‍💻 safe. Here is what you can do to flag joemphilips:

Unflagging joemphilips will restore default visibility to their posts.