First and foremost, I find Ubuntu the Linux distribution easiest to install and best supported when learning Web Development. I’m sure that’s open for debate, but that’s what the comments are for.

OK, I’m running Ubuntu, what next?

I suggest that your install Homebrew, “The Missing Package Manager for macOS (or Linux)”. It’s great but if you choose another path, I hope you can still follow along.

I have Homebrew, now what?

DDEV is an open source tool that makes it dead simple to get local PHP development environments up and running within minutes. It's powerful and flexible as a result of its per-project environment configurations, which can be extended, version controlled, and shared. In short, DDEV aims to allow development teams to use Docker in their workflow without the complexities of bespoke configuration.

Follow the directions at https://ddev.readthedocs.io/en/stable/#installation which will ensure you have everything needed to install DDEV and then Laravel.

Copy and paste from below, replace MY_SITE=”” with the name you wish to choose for you site:

Bing, bang, boom. I have some Laravel

The ddev launch command should have opened your default browser to this screen: 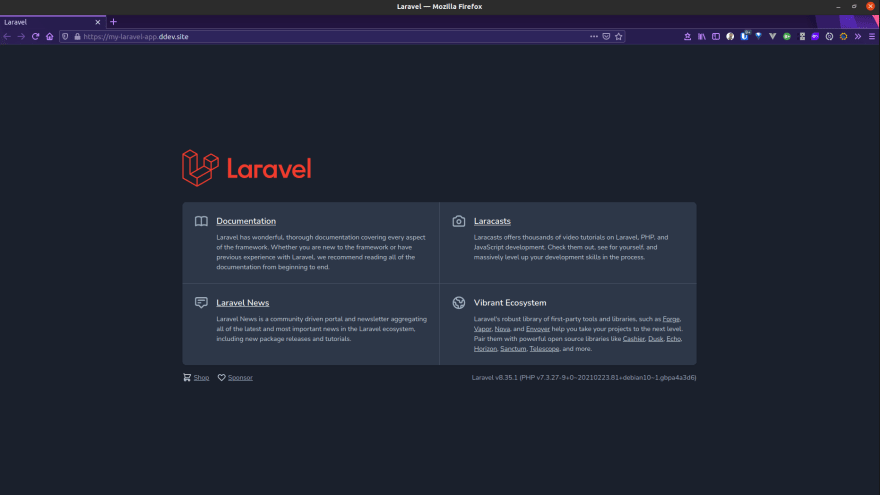 Once suspended, jonesrussell will not be able to comment or publish posts until their suspension is removed.

Once unsuspended, jonesrussell will be able to comment and publish posts again.

Once unpublished, all posts by jonesrussell will become hidden and only accessible to themselves.

If jonesrussell is not suspended, they can still re-publish their posts from their dashboard.