This article is going to use a relationship-oriented approach to dissect the prototypical OOP system of the .. the most popular programming language in the world~

Even if you're using the ES6 class syntax, that's just the surface, constructor and prototype are still doing their thing under the hood. So the prototypical system that I'll be talking about in this article is still relevant today and in the future.

The four relationships I'll get into are: 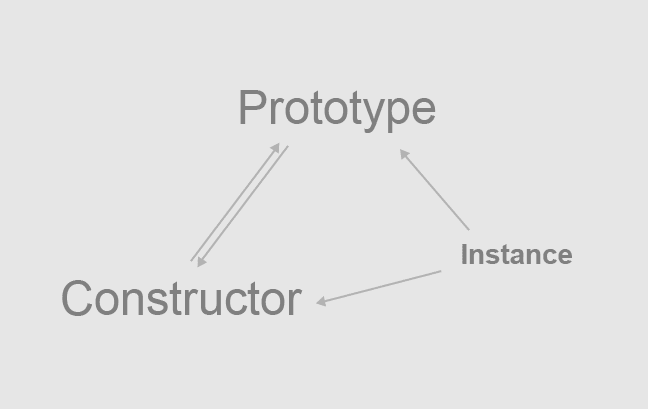 1. An instance has a constructor

This is a constructor:

As you can see, it's basically just a function with a capitalized name.

And you can create new instances of this constructor like this:

Now this object a will have a constructor property that points back to the constructor Person.

But first, let's talk about what a prototype is.

2. An instance has a prototype

A prototype is a place that holds the essential capabilities that the instances of a type can share. These capabilities are usually instance methods.

Let's get some hands-on.

(as a side note, a string is technically not an object, but when you access its methods, it gets converted into an object temporarily behind the scene, so for the scope of this article, we can just treat a string value as an object)

It has all the String type's capabilities, for example:

It's getting these capabilities from String.prototype:

(__proto__ is a property that exists in all objects and values, it points to a prototype. However, __proto__ is getting deprecated so it might not be available in some browsers, and definitely don't write code that relies on it.)

A cool thing about this is that, we can add new methods to this prototype:

(This is just for illustration. In everyday development, don't add your own methods to built-in types such as String.)

And then this isX method will be magically available to our existing string value:

This link between an instance and its prototype is automatically created when the instance is created, so usually you don't have to worry about connecting an object to a prototype.

Now let's talk about the relationship between constructor and prototype.

I can keep doing it, but I think you get the idea. There is a circular relationship between an object's constructor and its prototype.

With that in mind, here are some interesting relationships:

Just be aware that an instance has the __proto__ property, a constructor has the prototype property. Their names are different, but they are pointing at the same prototype.

4. A prototype has a prototype

I mentioned "a prototype's prototype." This sounds complicated, but let's take a look at a simple example.

This will give you the prototype of a plain object:

And This will give you the prototype of a string:

Obvious, they have different prototypes, so this should be false:

But since the String type is extending from the Object type. The plain object's prototype is actually the string's prototype's prototype.

So this will be true:

How to fix the React memory leak warning

Mocking in TypeScript with `factoree`