This tutorial is intended to create a simple Angular app which drives a “common issue in OOP paradigm which is code duplication and hidden patterns usually found in real world that can be solved using Inversion of Control techniques and allowing us to perform declarative programming.

Resources (what this article is about):

Okay so lets start by openingsrc/app/components/writers/writers.component.ts . This component has the following responsibilities:

Now lets look over src/app/components/user-posts/user-posts.component.ts . This one has the following responsibilities:

In OOP, each method is an action or verb domain related.

Cross Cutting Concerns are pieces of code that brings nothing to understand what this action is really doing by mixing infrastructure concerns with domain concerns.

Let’s see the code at https://github.com/k1r0s/angular2-srp-showcase/blob/normal-oop/src/app/components/writers/writers.component.ts#L41

Most of times a method body that should describe a business action is entangled with code that does not describe at all that action. Like opening a dialog, capturing exceptions, subscribe to close events, etc.

In OOP we try to separate concerns by declaring classes that are responsible to manage outdoor interactions that describe what business wants to happen (domain speaking). Usually that classes invoke other classes that describe how things should be fulfited.

A common issue in OOP paradigm is that, to replicate a behavior, code must be replicated too. Sometimes class extension isn’t enough because your behavior doesn’t always occur in the same spot or you simply don’t have enough time to change whole app arquitecture. For example, a log service has to be invoked at the end of some method calls printing method’s arguments and result but that implementation isn’t important at all in terms of domain problem meaning that code is polluting your app. Can you deal with logs calls with class extension? nope.

Authentication, Ajax resolution, UX action invocation, exception handling… almost anything that isn’t related with business logic its likely to be invoked in several places and that implementations can pollute your domain logic.

Lets back to writers component

What is really doing writers.component.ts at setup ?

Reading the code we may conclude that:

Many concerns take place as this code gets executed. In terms of domain this is simply fetch and render users list. There are a few domain rules that apply on this, catch resources, show a loading dialog while requesting a resource …

That behavior also gets replicated on user-posts.component.ts . But on this case there is a domain concern before: grab the selected user from cache.

There is a way to code that implementation abstracting us from component’s specific domain? Yes!

Hence we can achieve this on both components: 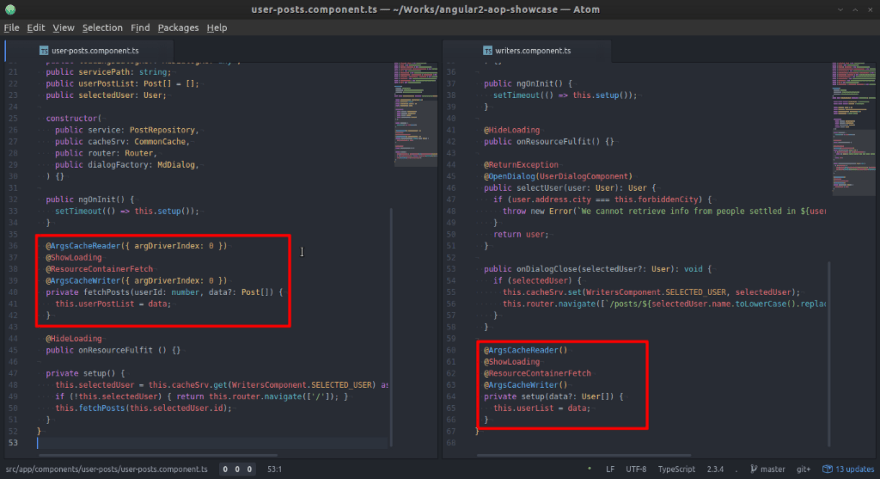 Note that the same behavior needs to be invoked in different spots and with different context/arguments.

And this works, trust me (running example).

Tip argsDriverIndex param for @ArgsCacheReader its just a specification of which method arguments index will be used as a serialized key to read/write from cache. This means that user-posts.component.ts will access cache having first fetchPosts argument. Therefore it will not call the same resource twice.

Is important to know that these decorators can be imported everywhere and are completly standalone (that depends on you). Meaning that you can remove some of them without messing callstack while in common OOP implementations you face side effects.

Method and class Decorators are a powerful tool against repetition and, it also provides a needed abstraction layer needed in modern applications. We have cleared infrastructure code from our component by using declarative programing whichs aims for:

“Remove side effects by describing what the program must accomplish in terms of the problem domain, rather than describe how to accomplish it as a sequence of the programming language primitives”.

Our code is clear as water and easy to mantain.

We have to understand that we have created a strong association with two components which can become very different in the near future. So if our abstraction is somehow deprecated, we must remove this decorator from that component which no longer match a pattern (interface), paste its implementation and code the difference.

Decorators are bread and butter in modern libraries like Angular, Vue (addon), also in backend, for instance Nest framework provides a lot of built in decorators to enhace your dev experience, improve readability, separate concerns.. etc.

Decorators are nice because provide you a language feature that allows you to add/remove/manage rich implementations without messing in language primitives.

Maybe in the near future decorators will be used as “standalone plugins which can be downloaded and plugged in your code providing features (example).

For instance, Angular’s @Component decorator is a neat way to register your class as a web component into angular boilerplate. So why you wont define some for your own needs?

Babel does not support interfaces to deal with hidden patterns , but it supports method and class decorators.

Currently if you need to write a function that needs to be called before specific constructor in some classes you need to deal with ES7 decorators API which is well explained in TS docs.

I created a library that makes very easy define your own method/class decorators. It will allow you to change, extend, modify the behavior of methods and constructors non-invasively. Of course this tutorial example was made using that library.

To-Do app: Composition API as an alternative to Vuex