Deno does away with the package.json of the Node.js era, and introduces version control by putting the version number directly into the URL.
According to the style guide, it is recommended to load modules into a file called deps.ts and import them indirectly from there in the project.

Here is a tool, UDD, to help you manage the module version.

It seems that UDD stands for Update Deno Dependencies.

By the way, why does the Sauropod of the main image (↓) have a cow-like atmosphere? 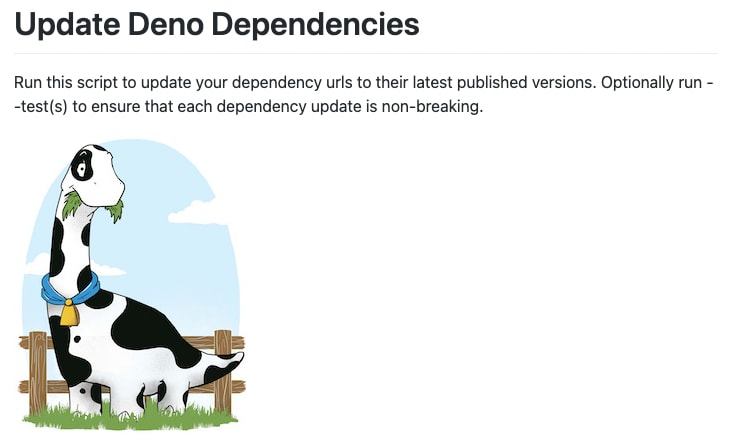 Raising and lowering its long neck to eat grass that grows directly on the ground is obviously useless, so I think the survival of the species is in jeopardy...

It is available at deno.land/x. Let's install it with deno install.

The default installation directory is ~/.deno/bin. Make sure that your PATH includes this directory.

If you run it with no arguments, you can see help.

udd checks the version of the modules in the file, and updates them all at once.

Modules that do not contain a version number in the import URL will be skipped.

If you add the --test option, it will update the file after making sure that the test passes.

Basically, you can run it without any configuration, so you can try it right away.
Another advantage is that if you no longer use this tool, there is no debt associated with it.

Where to get support

At the time of writing, the following registries have been updated.
Most of the commonly used ones in Deno are supported.

As mentioned above, no configuration is required for the basic operation, but there are a few useful settings that can be found here.

Just like package.json in Node.js, you can fix the major version by adding a token.
This is specified in the hash of the module URL. This is a very interesting idea.

< requires you to specify the upper version limit, others refer to the version specification contained in the URL.

Use it with Velociraptor

This is a personal preference, but I like to use Velociraptor for all the commands used in the Deno project.

Now you can use vr deps to update the module while checking that the test passes.

This configuration is included in my template.

This will allow us to "test and update" and reduce the psychological and work load of updating modules.
As a result, the life of the project will be extended.

This is a translation of the following article.
Please leave comments if there are any mistakes in the translation.

Try to update your dependencies with Renovate or Dependabot

Building an RSS Microservice with Deno and GraphQL

Once suspended, kawarimidoll will not be able to comment or publish posts until their suspension is removed.

Once unsuspended, kawarimidoll will be able to comment and publish posts again.

Once unpublished, all posts by kawarimidoll will become hidden and only accessible to themselves.

If kawarimidoll is not suspended, they can still re-publish their posts from their dashboard.

Once unpublished, this post will become invisible to the public and only accessible to カワリミ人形.

Thanks for keeping DEV Community 👩‍💻👨‍💻 safe. Here is what you can do to flag kawarimidoll:

Unflagging kawarimidoll will restore default visibility to their posts.