2018 is coming to an end and I want to review what I did this year. I think it's good to review, because often you don't realize what you really did accomplish.

2018 started with the end of a project for me, one that should have started June 2017, but started in August. It should also end in October, but ended in January. Guess this is the freelancer life, hu?

I also tried to buy a car, but somehow never did, lol.

I got some consulting for my master studies in the hope this would lead to finishing my master's degree in 2018. Guess, what? I didn't. 23 semesters and counting.

But I also did my first non-university public talk. It was about Polyamory in front of poly and mono people and they loved it <3

In this month I finished another project that started in 2017 and should already been finished, but whelp...

I also went to an IAMX concert.

I went to a "How to start a business meetup", which was kinda nice, the guy running this really tried to give practical help. Sadly there wasn't enough time to give me some advice, also I didn't find the time to go there again.

But end of April I got my AWS certificates, so at least something happened :D

I took part in the Pusher contest and hoped to win this thing with a game. In the end I only got a runners-up price. Well, I have to admit the game wasn't that fun to play. Since then I still have the AdaFruit stuff I won laying around, I should finally build something with it :)

I had a shirt idea which I let a friend of mine design. Wanted to wear it at the "Wave Gothik Treffen", a music festival, which I did. 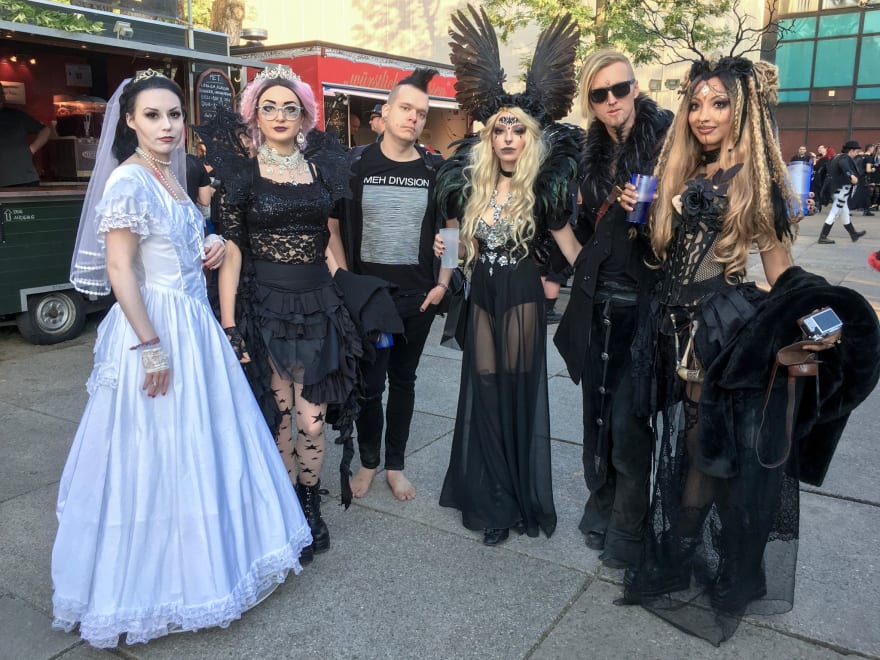 Gave away a few of them to my friends for marketing purposes but I never sold one single shirt and lost about 200€. Guess that's entrepreneurship XD

My Github tutorial React from Zero I created in 2016 got thousands of stars and I applied to the CodementorX program.

I bought myself a couch for birthday and went to the Comic Con.

I got offered a book deal by a small publisher from the US. They saw my React tutorial and loved it.

Also I finished my interviewing process with CodementorX and in the technical interview which was about React, the interviewer saw my React tutorial all over the news in the last weeks, so the interview went really well, haha.

I also went to a game developer meetup and to the Christopher Street Day.

Had my first interview for a CodementorX project and seemingly the only one this year. Nothing came of it.

This was the time I decided to focus 100% on the book in the hope at least something will come from that.

Finished the main writing and added extras like screenshots and quizzes to the book. Also, got the first big chunk of money from the pre-sales.

The book release and black-friday sales brought in some needed extra money, since I just started doing project work again that month and won't get paid until December.

Also, some people who read the book wrote me they got a job with the skills they learned with it. Made me very happy :)

Also went to a RetroWave party, they had a dance floor and a gaming floor with old consoles and a VR-system :D

I finished one big chunk of the follow up project, which was the porting of a iOS React-Native app to Android.

It was a really intersting project, because I didn't touch the android directory of that project for two years and had many native modules (video, in-app purchase, notifications, etc.) that needed to be swapped out.

Learned much about the iOS/Android differences here. They could make such a good platform if we would take all the good parts of both and merge them together, but well ... reality XD

I also was guest in the React Roundup Podcast, where I talked about React-Hooks, my book "React from Zero" and the author life. I think the episode will be released in January 2019.

This was also interesting, just talking with some intersting people. While I don't listen to podcasts myself, I'd love to talk in one again.

I also started recording a React from Zero video course, something I tried before but now want to get into more professionally.

I invested most of my time into my relationships and probably a bit too much uncoordinated time into my business.

I lost like 8kg this year, which is a good thing, because I became slighly overweight in the last years and this made my snoring worse.

I didn't blog or train as much as I liked, mostly because of all the uncoordinated time I poured into my business.

First I will finish up all that React from Zero stuff. Include feedback, go into print, finish the video course.

I also planned a new book and/or video course with AWS focus, but I still have to iron out the details.

I want to order all that business stuff so I don't have it on my mind all the time.

Maybe the podcast will introduce me to new intersting people and opportunities? Who knows.

Anyway, I'm hyped about what the future will bring.

K (he/him)
A developer that became a full-time writer, here on dev.to!
Chrome Extensions of the Month - January 2023
#productivity #webdev #javascript #beginners
CHALLENGE: Describe AI in five words or less.
#discuss #ai #watercooler
5 Life-Changing Lessons I Learned From Being Laid Off That Will Put You Ahead Of 97% Of People
#beginners #productivity #motivation #codenewbie