For my JavaScript SPA Project, I have an app called 飲む(nomu) . It is an app for cocktail lovers where the user can input their favorite cocktails, even their experimental cocktail mixes. As challenging as this project can be, I have learned so much about JavaScript and added some new Rails knowledge. I realized that there is still a lot more to learn.

Like what Socrates said, “The more I know, the more I realize I know nothing.”

Here are some of the lessons that I have learned based on the errors that I have encountered while doing this project:

I spent I don’t know many hours figuring out why my destroy action in my controller is not working and almost gave up on this functionality. During that time, my friend and I figured out that postgres is not allowing me to delete a cocktail because ActiveRecord tried deleting an instance of a cocktail while my liquor table is still referencing it. One option that I found is adding referential integrity options set to cascade. In this it is ON DELETE. ON DELETE CASCADE will delete that instance of a cocktail and the other rows on your table associated with it. There are other options like ON DELETE SET NULL and ON DELETE RESTRICT that I could probably use as well but I will have to dig deeper into to know how they work and what option to use depending on the functionality of my application. Second option is setting the dependent option in your model like this:

I went with the second option which I think is the safer way to go as I don't want to directly affect what I have in my database.

The bind() method creates a new function that, when called, has its this keyword set to the provided value, with a given sequence of arguments preceding any provided when the new function is called. 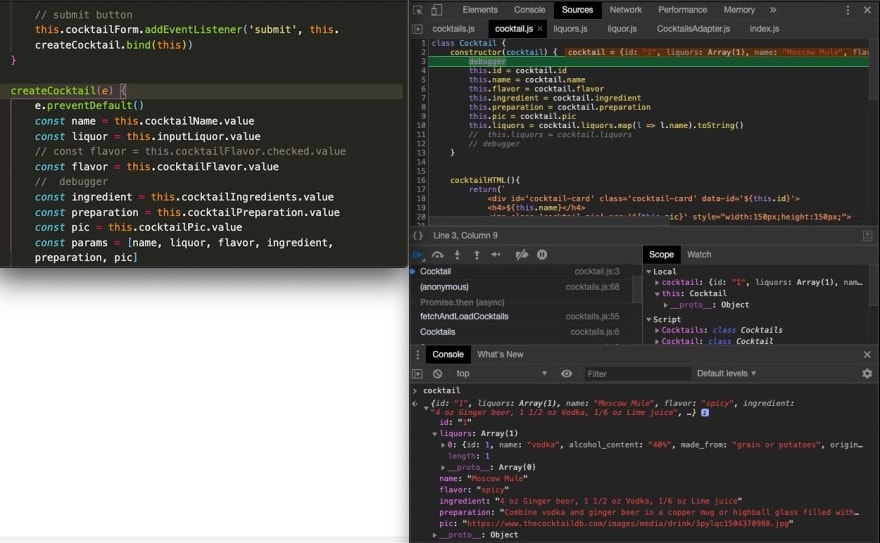 This is the first time I have actually seen how useful .bind() is.
So in my code above, I use .bind() to invoke a function that has a parameter of this meaning I want to use the same object when that function is called. In this case when I click submit in my form the values that I entered in my form is the same exact object that I want to create. What’s this? This is how I think of it: this === self === Object. With this object do(bind) this action..bind() acts a bridge between the object and a function is another way of thinking about it. My reference might be a little off but it has helped me understand it more. Still confused? This video has helped understand it better.

3. debugger is your best friend in JavaScript

It’s most likely a personal preference but you should love it more than console.log()! I would not have done this project without these two though! However, debugger helps me see what’s happening in my code at that moment in time. I would be blindly troubleshooting and guessing what my code is returning if I had not learned this tool and my project would probably take twice as long without learning to know how to debug. Debugger has helped me fix a lot of errors and although it took me a while to fix some of them I would not have done so if there is no tool like it. This video tutorial is actually a good start to learn how to use debugger.

What's the best way to render specific items from a Rails collection?

How JavaScript Variables Should Be Named