A quick look into the ClojureScript ecosystem and a starting guide for developers interested in ClojureScript.

There are many online resources to learn Clojure and ClojureScript. I think the best one is clojureacademy. This is very much like codeacademy. A highly interactive learning environment. The downside is that it only contains courses on Clojure and not particular ClojureScript.

A thing I noticed reading through the official documentation and third party packages documentation is that the language is more flamboyant than I’m used to. Are there anyone else that has noticed that?

The workflow is not as fluent if you are coming straight from the web world of webpack and NPM. ClojureScript runs on the JVM and the startup is rather slow. When it’s up and running there are however no problems. It still feels sluggish and kinda weird to work on the JVM while building an SPA for the web for me. Figwheel (ClojureScript’s live reloader) is really a must and it works flawlessly as well.

Where ClojureScript really shines is the REPL capabilities. This is a powerful feature and invites you to try, test and learn. 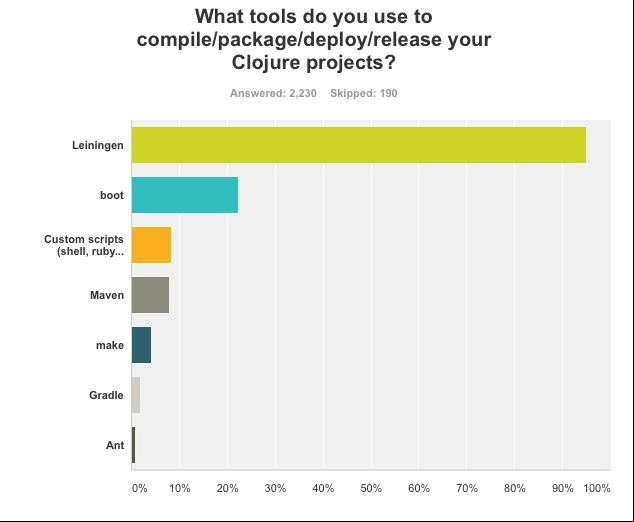 It seems like in the ClojureScript's community there are a lot of highly skilled developers. There are not a whole lot of packages but most of them are of quite good quality. As a beginner, I found the documentation on some of them rather lacking.

You can also use third-party javascript libraries, either through CLJSJS or including it in your build process. 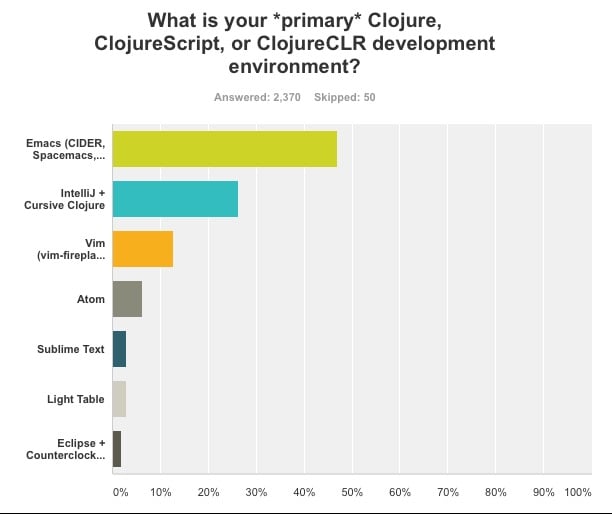 ClojureScript's tooling is weak compared to other languages. The best ones after my short period of testing are undoubtedly Emacs, Cursive, and Atom. There are other good ones like nightlight and nightcode but they are quite simple in terms of functionality.

I believe ClojureScript still have some work to do so it will be more inviting to learn for web developers that usually work with React, Vue or Angular. The tooling support is a must since most programmers have a favorite editor and it takes time to get comfortable with an editor. The documentation is quite good but still not there yet.

The pics is taken from the State of Clojure 2016 survey

Property-Based Testing: From Erlang/Elixir to Clojure

Andreas Rein
15,000 GH stars in a year: how we did it 🤩
#opensource #career #devjournal #programming
Should developers study 20 hours a week after work?
#career
The perfect open-sourcer does not exist
#opensource #beginners #github #productivity

Once suspended, kleinrein will not be able to comment or publish posts until their suspension is removed.

Once unsuspended, kleinrein will be able to comment and publish posts again.

Once unpublished, all posts by kleinrein will become hidden and only accessible to themselves.

If kleinrein is not suspended, they can still re-publish their posts from their dashboard.

Once unpublished, this post will become invisible to the public and only accessible to Andreas Rein.

Thanks for keeping DEV Community 👩‍💻👨‍💻 safe. Here is what you can do to flag kleinrein:

Unflagging kleinrein will restore default visibility to their posts.