Today I'm going to share with you another chapter from my canceled book Easy Development with GoFiber (I talked about it in the first article of this series). Actually, this chapter was supposed to be in the practical part of the book (the article series), but I purposely pulled it out as the third chapter.

I think application testing is just as important in understanding how the web framework works under the hood.

Plan for the Chapter 3

In this third article (or chapter), we will review the topic of the Fiber application testing for beginners on real example.

And we’re going to cover the following 👇

Testing written code is a very useful and needed skill, so we will start this article with a review of the Fiber application testing process.

We will use both the features built into the language and the framework for testing and some third-party tools. For example, the very popular Go testing package Testify.

☝️ Note: Don't worry if you've never written unit-tests in your Go applications, because it's a very easy process to understand!

What does the test function include?

☝️ Note: Also, note that the test file must be inside the same Go package as the function to be tested.

Now, let's look at an example of such a test function on a very simple example: we're going to check one of the application paths for what HTTP methods it gives back.

Such a test case is needed to test our target function not only for a positive scenario, but also for a negative (FAIL) scenario, which may also occur as a result of using the application in the future.

Tip for VS Code users

If you write code in VS Code with the Go tools plugin (like me 😋), it has a built-in generator for unit-tests that generates a starting template for testing a particular function: 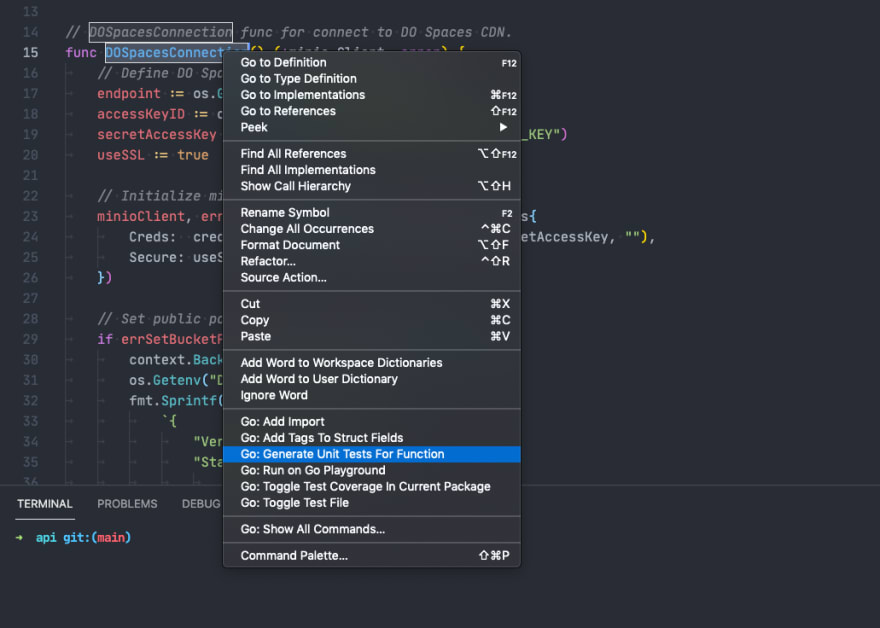 OK! Let's write our first unit-test. As always, please follow the comments in the code, it will help you understand what is going on in each of the lines.

So, at the very beginning of the loop, using the standard Go package called httptest, we create a new HTTP request with the GET method to be sent to the routing address from the test case.

This passes the newly created HTTP request to the Test function built into the Fiber web framework, which we looked at earlier in this article. This is required so that the application instance can process the request.

The next step is to compare two HTTP statuses: the one obtained from the request and the one we specified in the test case. Here we first encounter the most frequently used function assert.Equalf from the Testify package, the purpose of which is simply to compare two values. If the values match completely, the test will be considered passed.

Running this test with the command go test -v ./..., we will see that test was successful:

Congratulations! 🎉 We just wrote a unit-test for a function, and it succeeded. Yes, that was just one use case, but trust me, the same thing is waiting in real applications.

We will see it for ourselves in the next parts of this series.

We wrote our first test case for the application, using the Test method and the third-party package called Testify. I truly hope that now it will be much easier for you to write tests for your Fiber (and not only) web applications!

In the next article, we will be working with internal and external Fiber middleware, third-party packages and boilerplate.

Photos and videos by

Largest no. in Array using Recursion

Once unpublished, this post will become invisible to the public and only accessible to Vic Shóstak.

Thanks for keeping DEV Community safe. Here is what you can do to flag koddr:

Unflagging koddr will restore default visibility to their posts.