Azure Managed Identity works for Azure resource authentication without secret keys. Among some authentication method options, this is the best way to secure the system as secret key management costs you a lot, for example, key storage, rotation, leakage management etc. However, managed identity authentication requires a bit more work to build infrastructure of the system because it needs high privileged permissions of Azure AD (Active Directory) and Azure Subscription, which makes it difficult to build automated deployment pipelines.

Azure Service Bus has three options for its authentication method.

This method does not require secret key management, which is very secure, but requires Azure Subscription Owner role. This has to be a problem for an automated deployment pipeline because you do not want to grant Subscription owner role to Azure DevOps pipeline service principal. The Azure DevOps service principal has rights to deploy Azure resources through the Infrastructure as Code pipeline, but does not have a right to set up managed identity access for Service Bus. Then you need to have at least one manual step in the pipeline. 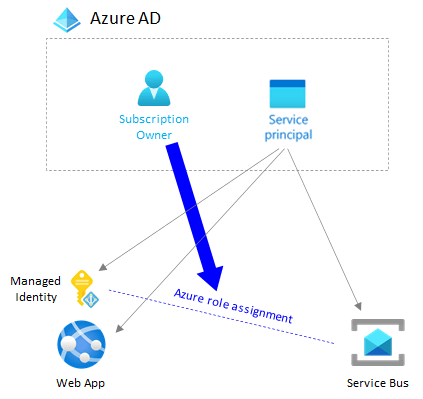 With Subscription Owner or User Access Administrator role, you run the powershell command below on Azure.

How ::before and ::after work

I used both Code and No-Code tools to launch my product within a weekend!

Once suspended, koheikawata will not be able to comment or publish posts until their suspension is removed.

Once unsuspended, koheikawata will be able to comment and publish posts again.

Once unpublished, all posts by koheikawata will become hidden and only accessible to themselves.

If koheikawata is not suspended, they can still re-publish their posts from their dashboard.

Once unpublished, this post will become invisible to the public and only accessible to Kohei Kawata.

Thanks for keeping DEV Community 👩‍💻👨‍💻 safe. Here is what you can do to flag koheikawata:

Unflagging koheikawata will restore default visibility to their posts.