So you have written your React Application and you are ready to deploy it?

Although there are already existing solutions like Netlify, Vercel, to help you deploy your application easily and quickly, it's always good for a developer to know how to deploy an application on a private server.

Today, we'll learn how to deploy a React App on AWS Lightsail. This can also be applied to other VPS providers.

For this project, we'll be using an already configured React application. It's a project made for this article about FullStack React & React Authentication: React REST, TypeScript, Axios, Redux & React Router.

You can directly clone the repo here.

Once it's done, make sure to install the dependencies.

Here, we'll configure the application to use env variables but also configure Docker as well.

It's important to keep sensitive bits of code like API keys, passwords, and secret keys away from prying eyes.
The best way to do it? Use environment variables. Here's how to do it in our application.

Actually, the .env file is ignored by git. The env.example file here represents a skeleton we can use to create our .env file in another machine.

It'll be visible, so make sure to not include sensitive information.

Now, let's copy the content and paste it in .env.example, but make sure to delete the values.

Testing in an application is the first assurance of maintainability and reliability of our React server.
We'll be implementing testing to make sure everything is green before pushing for deployment.

To write tests here, we'll be using the react testing library.
We'll basically test the values in the inputs of your Login component.

Docker is an open platform for developing, shipping, and running applications inside containers.
Why use Docker?
It helps you separate your applications from your infrastructure and helps in delivering code faster.

If it's your first time working with Docker, I highly recommend you go through a quick tutorial and read some documentation about it.

Here are some great resources that helped me:

The Dockerfile represents a text document containing all the commands that could call on the command line to create an image.

Add a Dockerfile.dev to the project root. It'll represent the development environment.

Here, we started with an Alpine-based Docker Image for JavaScript. It's a lightweight Linux distribution designed for security and resource efficiency.

Docker Compose is a great tool (<3). You can use it to define and run multi-container Docker applications.

What do we need? Well, just a YAML file containing all the configuration of our application's services.
Then, with the docker-compose command, we can create and start all those services.

Here, the docker-compose.dev.yml file will contain three services that make our app: nginx and web.

This file will be used for development.

And the next step, let's create the NGINX configuration file to proxy requests to our backend application.
In the root directory, create a nginx directory and create a nginx.dev.conf file.

The setup is completed. Let's build our containers and test if everything works locally.

Once it's done, hit localhost/ to see if your application is working.
You should get a similar page.

Great! Our React application is successfully running inside a container.

Let's move to the Github Actions to run tests every time there is a push on the main branch.

GitHub actions are one of the greatest features of Github. it helps you build, test or deploy your application and more.

Basically, what we are doing here is setting rules for the GitHub action workflow, installing dependencies, and running the tests. 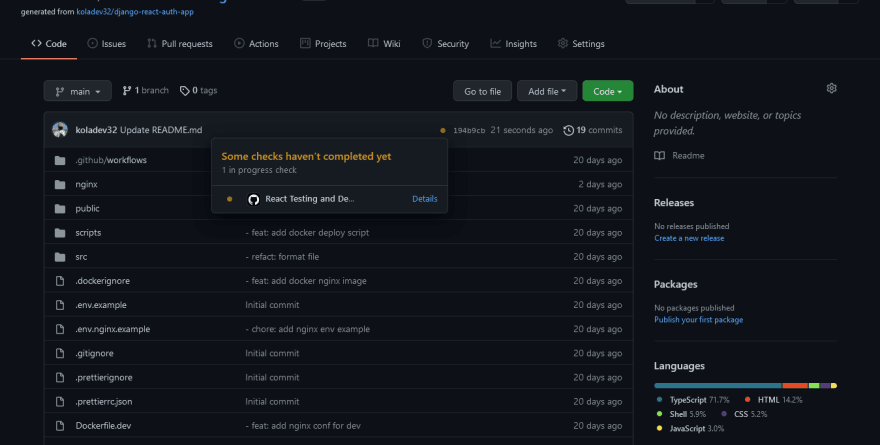 After a moment, the yellow colors will turn to green, meaning that the checks have successfully completed.

Setting up the AWS server

I'll be using a Lightsail server here. Note that these configurations can work with any VPS provider.

If you want to set up a Lightsail instance, refer to the AWS documentation.

Also, you'll need Docker and docker-compose installed on the machine.

After that, if you want to link your server to a domain name, make sure to add it to your DNS configuration panel. 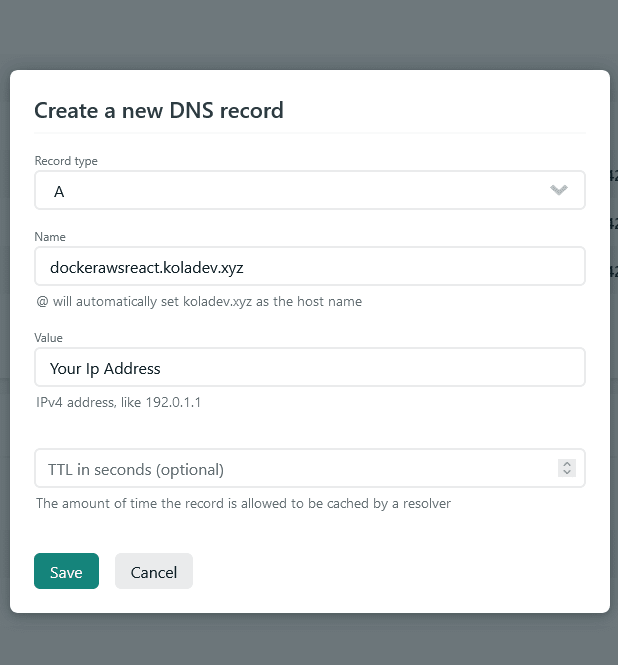 Once you are done, we can start working on the deployment process.

To automate things here, we'll write a bash script to pull changes from the repo and also build the docker image and run the containers.

We'll also be checking if there are any coming changes before pulling and re-building the containers again.

Good! Login on your server using SSH. We'll be creating some new directories: one for the repo and another one for our scripts.

And just paste the content of the precedent script and modify it if necessary.

Don't forget to add the dot .. Using this, it will simply clone the content of the repository in the current directory.

Great! Now we need to write the docker-compose.prod.yml file which will be run on this server.

We'll be adding an SSL certificate, by the way, so we need to create another nginx.conf file.

Make sure to replace dockerawsreact.koladev.xyz with your own domain name...

And no troubles! I'll explain what I've done.

So as usual, we are listening on port 443 for HTTPS.
We've added a server_name which is the domain name. We set the server_tokens to off to not show the server version on error pages.
And the last thing, we set the request size to a max of 20MB. It means that requests larger than 20MB will result in errors with HTTP 413 (Request Entity Too Large).

Now, let's write the job for deployment in the Github Action.

Notice the usage of Github Secrets here. It allows the storage of sensitive information in your repository. Check this documentation for more information.

We also using here a GitHub action that requires the name of the host, the username, the key, and the passphrase. You can also use this action with a password but it'll require some configurations.
Feel free to check the documentation of this action for more detail.

Also, notice the needs: [build] line. It helps us make sure that the precedent job is successful before deploying the new version of the app.

Once it's done, log via ssh in your server and create a .env file.

And finally, create a .env.nginx file. This will contain the required configurations to create an SSL certificate.

Add your email address. Notice here that STAGING is set to 1. We will test the configuration first with Let’s encrypt staging environment! It is important to not set staging=0 before you are 100% sure that your configuration is correct.

This is because there is a limited number of retries to issue the certificate and you don’t want to wait till they are reset (once a week).

Declare the environment variables your project will need.

Make a push to the repository and just wait for the actions to pass successfully.

And voilà. We're done with the configuration.

if your browser shows an error like this, the configuration is clean! We can issue a production-ready certificate now.
On your server, stop the containers.

Then, start the containers again.

In this article, we've learned how to use Github Actions to deploy a dockerized React application on an AWS Lightsail server. Note that you can use these steps on any VPS.

And as every article can be made better so your suggestion or questions are welcome in the comment section. 😉

Check the code of this tutorial here.

Once suspended, koladev will not be able to comment or publish posts until their suspension is removed.

Once unsuspended, koladev will be able to comment and publish posts again.

Once unpublished, all posts by koladev will become hidden and only accessible to themselves.

If koladev is not suspended, they can still re-publish their posts from their dashboard.

Once unpublished, this post will become invisible to the public and only accessible to Mangabo Kolawole.

Thanks for keeping DEV Community 👩‍💻👨‍💻 safe. Here is what you can do to flag koladev:

Unflagging koladev will restore default visibility to their posts.