Modern JavaScript bundlers like rollup.js and Webpack support the great feature that allows to decrease output bundle size and it's called tree shaking 🌲

Tree shaking is a term commonly used in the JavaScript context for dead-code elimination. It relies on the static structure of ES2015 module syntax, i.e. import and export. The name and concept have been popularized by the ES2015 module bundler rollup.

Usually it works like a charm, but sometimes something can go wrong... 🤭

The common pattern for React components is to have some static properties like defaultProps, propTypes, etc.

In our case (I am working on a UI library called Fluent UI React) we also have another static properties like className, create and few others. So what can go wrong? 🤔

Let's assume that we have such component:

And then we just want to import buttonClassName variable from it:

Let's compare the output produced with Webpack 4 with and without that line:

Spoiler alert: Rollup handles this properly which can be checked in an interactive playground that I have created.

This issue is well described in webpack/webpack#8308 and short outcome is that:

Code like this g1.staticProperty2 = 'prop2'; can actually cause side-effects, if setters are registered.

For classes it can be fixed by usage of babel-plugin-no-side-effect-class-properties which moves class properties definition to IIFE:

In this case there will be no side effects as static properties now defined inside of IIFE.

What about functions? I haven't found any ready to be used solution yet. On our side we are still discussing the proper solution. To immediately fix this issue the following workaround can be applied:

But it's obviously too hard to scale this approach. However, for React components it may be solved in a different way as there are two common static properties:

This post can be considered as a followup for library authors, for example Downshift.js met this issue previously. 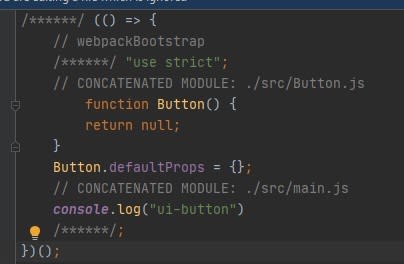 I also tried the sample with webpack@5.0.0-beta.16 and it's the case there as well because Webpack relies on Terser for dead code minification.

As conclusion I would like to advice library authors rely on their tools as modern JavaScript toolkit is really powerful. But, at the same time keep your eye on produced bundle size 🦅 Bundlephobia and webpack-bundle-analyzer can help you there 👋

React Pro Tip #2 — How to Type `this.props` to Include `defaultProps`

How to Integrate Tailwind CSS into a React app

Once suspended, layershifter will not be able to comment or publish posts until their suspension is removed.

Once unsuspended, layershifter will be able to comment and publish posts again.

Once unpublished, all posts by layershifter will become hidden and only accessible to themselves.

If layershifter is not suspended, they can still re-publish their posts from their dashboard.

Once unpublished, this post will become invisible to the public and only accessible to Oleksandr Fediashov.

Thanks for keeping DEV Community 👩‍💻👨‍💻 safe. Here is what you can do to flag layershifter:

Unflagging layershifter will restore default visibility to their posts.