I first got involved with automated load testing about 10 years ago. At that time I was working as a developer on a team building an enterprise application to be used by hundreds of concurrent users.

To prepare for load testing we first setup a production-like test environment. We then happily navigated to the home page to do some basic smoke testing before the real testing began. Unfortunately the home page would not load at all.

After some investigation, we realized we had SQL performance issues with just a single user, and our application needed to support hundreds of concurrent users.

What is Load Testing

Other inputs to load testing could be the business transaction distribution. For example:

Based on these types of requirements, load testing tools enable us to design and develop automated processes to verify the application conforms to the requirements, and to identify areas that need attention.

Typically the purpose of the testing is to ensure the backend environment is designed, developed, and sized in the way that will allow the application to meet performance requirements.

To execute a 300 concurrent user load test, we don’t need to open 300 versions of a browser or mobile app. Instead, our load testing tool will simulate the client by sending the same API requests the client would send. 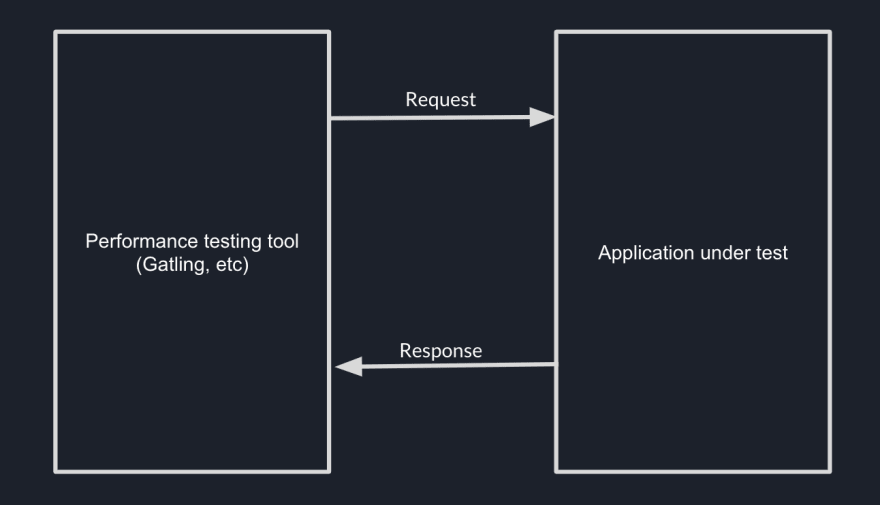 Gatling is a popular load test tool with two versions, an open-source version that is free, and an Enterprise version, Gatling FrontLine. For this post I will be focusing on the free version.

Gatling is written in Scala so it can run on both Linux and Windows machines. Gatling is a code-based tool, which means you are writing Scala code to build your scripts. Gatling does not have an IDE; rather it’s a plug-in that will integrate with popular IDEs such as Visual Studio Code or IntelliJ IDEA.

Gatling is built utilizing the Akka toolkit, meaning Gatling does not need a separate thread for each user, allowing for a much larger workload to be generated on a single test machine as compared to tools like JMeter.

Gatling provides robust reports that allow you to analyze how your application is performing under load.

In addition to the stats in the command window, you’ll see a location for the HTML results report that you can open in a browser. It should look something like this: 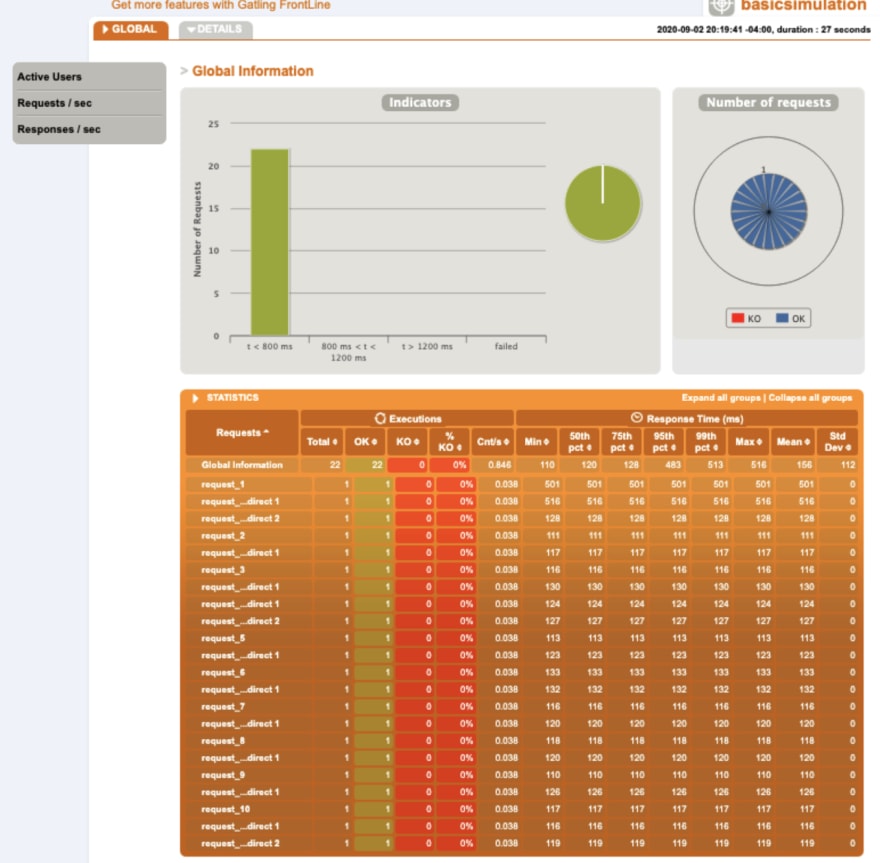 So that’s it! You downloaded a sample gatling script, ran it, and viewed the results. If you want to take a look at the script you ran, you can find it at user-files/simulations/computerdatabase/BasicSimulation.scala. Open it with a text editor or your favorite IDE.

Now it’s time to create your own script!

For our first script will test a sample Gatling website. This site provides a list of computers in inventory, and allows you to add and change computers. We want a script that will view the list of all computers and then add a new one.

There are a couple options for creating Gatling scripts. One is to use the Gatling Recorder that is included with Gatling, and the other is to develop scripts from scratch. Since we're just getting started, let's start with the recorder.

To start the Gatling Recorder, from a command line navigate to the /bin folder of your unzipped working folder and execute ./recorder.sh (recorder.bat on Windows). The recorder utility will launch: 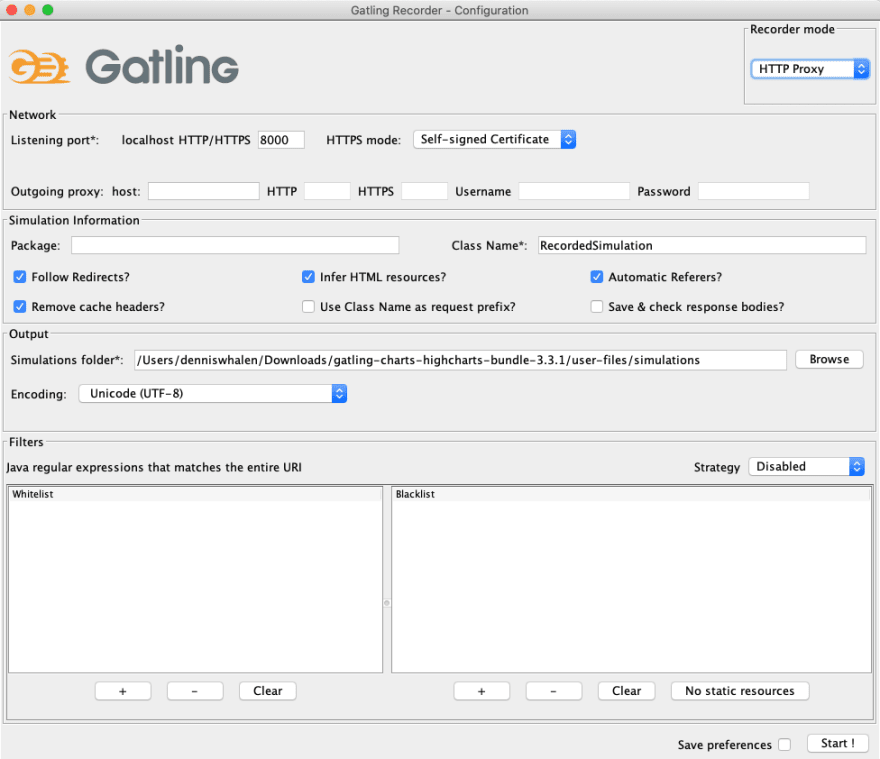 We're going to use this utility to generate a test script.

In the upper right corner there is a dropdown for Recorder Mode that has 2 options, HTTP Proxy and HAR Converter. For this post we are going to select HAR Converter, which uses a HTTP Archive File as input the the script generation process.

A HAR file contains detail about the browser's interaction with network resources. The file is typically used to help troubleshoot performance issues, as it contains detailed performance data from the browser perspective. The HAR file is in JSON format and can be generated with Chrome, Firefox, IE, or Edge. We are going to generate a HAR file using Google Chrome.

Open Chrome, open Developer Tools, click the Network tab, and browse to https://computer-database.gatling.io/computers. We are going to generate a load test script for this site.

In Developer Tools, click the Clear button, then click the Preserve Log checkbox, which will allow your network activity to be captured as a HAR file.

Now we are going to step through our site and allow the browser to record the activity to the HAR file.

Now that you have a HAR file, you can use that in the recorder.

Generating the script with the HAR file

Back in the recorder, let's generate the script from the HAR file:

From the Gatling install folder, navigate to the user-files/simulations folder. You should see a file named "MyFirstGatlingScript.scala". It's a text file, so open it in your favorite text editor.

I'm not going to cover everything in the script, but there are a few points I'd like to highlight:

And there you have it. You create your first Gatling script and executed it!

This is a basic introduction to Gatling. In the real world you won't be able to rely on the recorder to do all the work.

You are going to have requirements for your tests that will require you to edit the generated scripts, and you will likely need to build new scripts from scratch. In my next post I'll get into details like this and more, so stay tuned!

How to Use Head and Tail in Elixir

Once unpublished, this post will become invisible to the public and only accessible to Dennis Whalen.