My name is Ido, and I’ve been in the tech industry for quite a while. My latest project is aimed at bringing some modern cloud and data technology into the world of farming. I’ve started with a simple enough goal: deliver the data from present-day (out dated) farm management software into the cloud. There we can conduct advanced analysis and help farmers better manage their farms.

I am on a very low budget, without outside investors or any spare money. Also, as it’s only me working on this project, I will need to keep any solution as simple as possible, and beware of wasting my time on unnecessary optimisations/features.

To incorporate for these requirements I’ve used Google Cloud Platform’s set of tools. I’ve found that they have a good approach to data processing and analysis. Moreover, they really believe in managed services, which should save me a lot of time. They do have some shortcomings, which I’ll also go into details about.

On to the real stuff…

This is what we set out to do in the project:

I’ll start with a diagram that describes the full flow the data makes from farm to its end goal (be it dashboards or data science stuff). Following it I’ll describe each stage and how it’s implemented on google cloud: 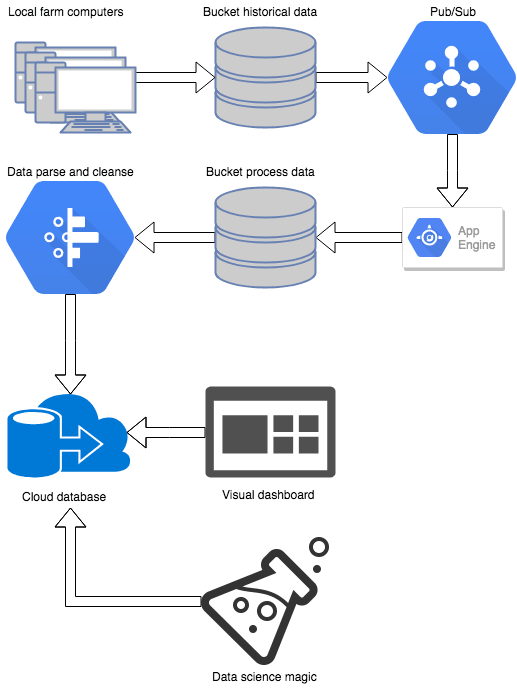 The billing has been very reasonable, although my customer base is still relatively small (I have tens of farms I work with). The entire testing and setting up of the environment were all within the free tier, so no need to commit for any payment before launching.

At the moment I’m supporting tens of farms with a monthly cost of 10–15$. A big part part of this cost can be ‘optimised away’, but as mentioned I try to avoid too early optimisations.

Google Cloud Platform helped me a lot in getting up and running with the project quickly and efficiently. Their managed services approach is great for these purposes. All their services work very well together, and offer full end to end solution for web app development and data pipelines.

Nonetheless, it has its good share of downsides. The documentation isn’t always comprehensive enough, and just googling for a solution doesn’t work that well with a lot of the services being new and not that common yet. Moreover, issues in managed services are harder to solve, as a lot of the details are abstracted away.

I left all of the technical hard core details out, but be sure that I faced many pitfalls and nitpicks. Feel free to leave comments and questions, and I can dig deep into a lot of the tools I’ve used if you’re interested in anything specific.

Once suspended, leibole will not be able to comment or publish posts until their suspension is removed.

Once unsuspended, leibole will be able to comment and publish posts again.

Once unpublished, all posts by leibole will become hidden and only accessible to themselves.

If leibole is not suspended, they can still re-publish their posts from their dashboard.

Once unpublished, this post will become invisible to the public and only accessible to leibole.

Thanks for keeping DEV Community 👩‍💻👨‍💻 safe. Here is what you can do to flag leibole:

Unflagging leibole will restore default visibility to their posts.