In the first part of the intro django rest framework, we set up the project and did an overview of what the project is all about. Check it out if you haven't yet. 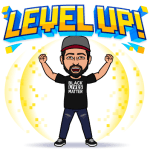 In this section, we'll be going through user registration with the django rest framework and utilizing JSON web tokens for authorization. We'll also be extending the default User model that ships with django so as to allow us to capture more details about our system's users.

The project is available on github.

What is a JSON Web token?

JSON Web Token (JWT) is an Internet standard for creating JSON-based access tokens that assert some number of claims. For example, a server could generate a token that has the flag "logged in as admin" or "logged in like this user" and provide that to a client. The client could then use that token to prove that it is logged in as admin. The tokens are signed by one party's private key (usually the server's) so that both parties can verify that the token is legitimate. The tokens are designed to be compact, URL-safe, and usable especially in a web-browser single-sign-on (SSO) context. JWT claims can be typically used to pass the identity of authenticated users between an identity provider and a service provider.
Unlike token-based authentication, JWTs are not stored in the application's database. For a more in-depth explanation of how the JWTs work, check out this awesome video.

Before proceeding, let's take a look at some of the endpoints we'll be utilizing in this section.

Those may seem like a handful but the good news is that djoser has done most of the heavy lifting for us. All the endpoints starting with auth are djoser generated.

Getting back to the first part of the series, we installed some python packages. We'll need to add those packages to the project's settings.py file so as to utilize them in our django project.

Don't forget to change the authentication settings for DRF to reflect the usage of JWTS.

With this system set up, it's important to register routes for the endpoints that'll be used within the project. By registering the paths to the project's main urls.py file we can access the different endpoints we'll need later on.

Django ships with a default user model with fields like username, passwords and email input, in some cases, however, these fields may not be enough prompting us to extend the model or create your custom user model. In this case, we'll be extending the user model because we need to have a way to differentiate users. There'll be two user types. Those that can organize events and those that just want to attend events.

We'll also create a post_save signal to automatically create the user profile for new users that register to the platform.
For this, create a signals.py file and write the code below.

For a detailed explanation on how signals work, this is a good starting place
Don't forget to register the signal in your app.py file like so:

With the basic set up out of the way, let's get to the API implementation.
If you are new to django, serializers allow complex data such as querysets and model instances to be converted to native python data types that can be easily rendered to formats like JSON. This is called serialization. They also allow deserialization after first validating incoming request data.

Within the app's directory, we'll initiate a serializers.py file and input the code below:

Going line by line, what we did is import the serializers class from rest_framework as well as the model we want to serialize. In this case, it's the userProfile model.

Our first serializer is userProfileSerializer. This will inherit from the ModelSerializer class in django. As you noted before, the userProfile model was linked to the default user model in django. We'll indicate this field as read_only. This means that the field will be included in the APIs output but won't be included during Create or Update operations on the endpoint. To populate this field, we'll create a method to automatically fill the field with the request user.

There are other serializer types in rest_framework such as ListSerializer and HyperlinkedModelSerializer. For a comprehensive guide on the serializers, the rest framework docs are a great place to start.

To access data in an API, we use endpoints. This are basically URL routes. How django works is that each url is linked to a controller called a view. The controllers can either be class based or function based.
After routing has determined which controller to use for a request, your controller is responsible for making sense of the request and producing the appropriate output.

One implementation of this controller in rest framework are the generic views. These were developed as a shortcut for common usage patterns. They take certain common idioms and patterns found in view development and abstract them so that you can quickly write common views of data without having to repeat yourself.
Some of these views are CreateAPIView, ListAPIView, ListCreateAPIView, RetrieveUpdateDestroyAPIView and the list goes on.

Each API view is linked to the serializer class we had previously created.
One thing we notice is the

The views are then linked to a URL endpoint in the app's urls.py file:

Permissions determine whether a request should be granted or denied access.
Django rest framework ships with several. I won't get into those as it's documentation is quite comprehensive about them. However, let's draw our attention to the

This is a custom permission implementation. We'll initialize a permission.py file and populate it with the code below:

By overriding the BasePermission class, we can create our own permission. This class has two methods that we can override.

Both must return True if a request is to be granted and False if the request is denied. SAFE_METHODS are GET, OPTIONS, and HEAD.

In our custom permission class, we are checking if the requesting user is similar to the object's user field. This will ensure that a profile owner is the only one that can change their information.

Almost done now 🤣. We'll write some tests to ensure our endpoints are working as required.

To run the tests, run the command

If you are feeling a bit confused, here's the project structure up to this point. 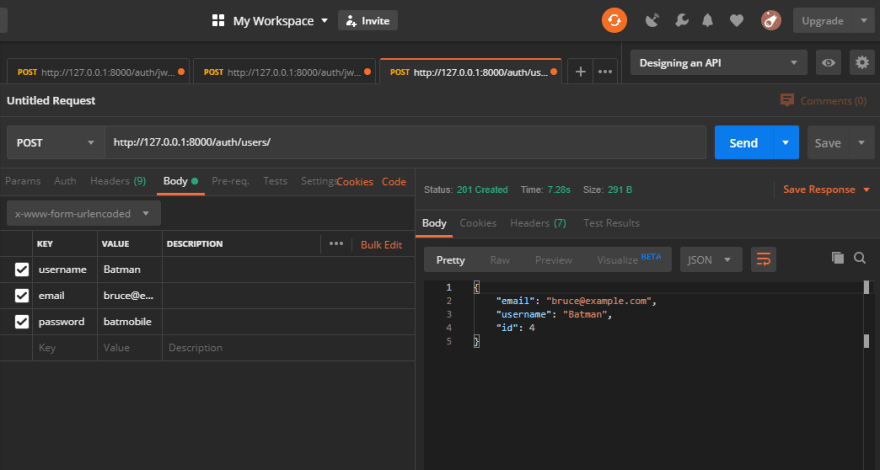 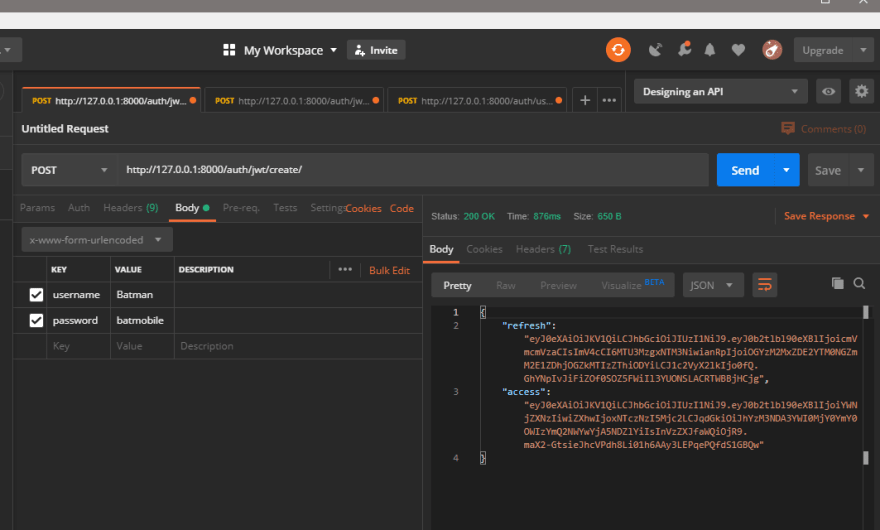 We'll be passing the get request as the user Batman. To do this, every post request must have a JWT to identify the user as a valid user. In post man, we can place the token in the auth section and indicating you want to use a Bearer token. You'll then paste in the access token generated above. 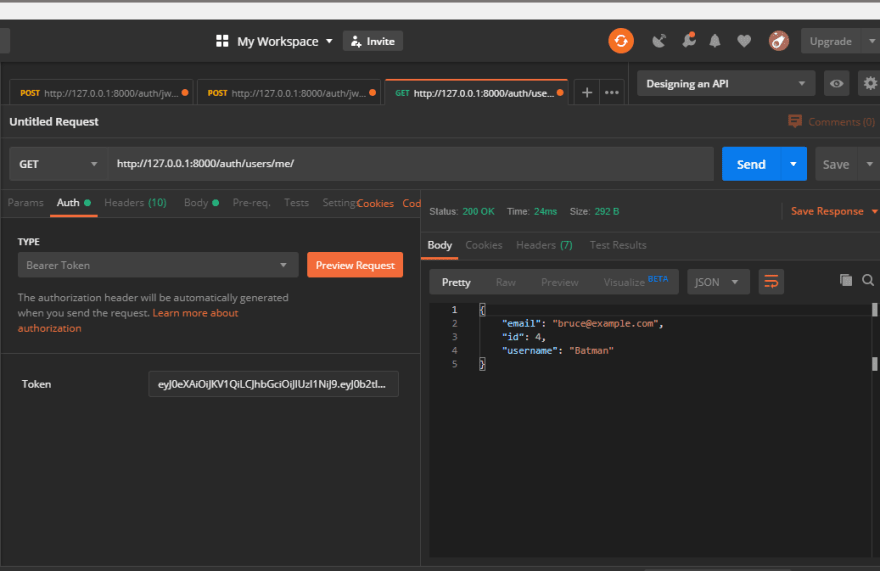 Get all user Profiles

This will be through a GET request. 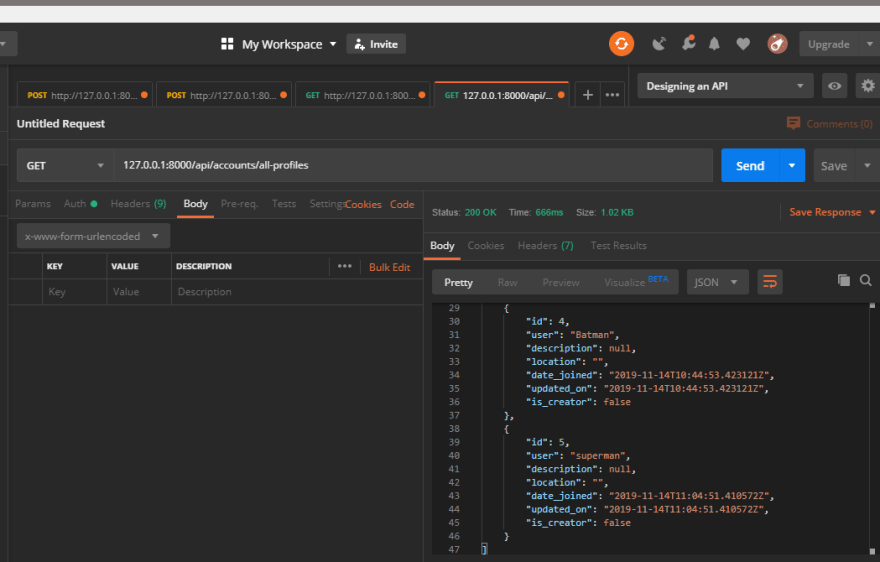 Through a PUT request 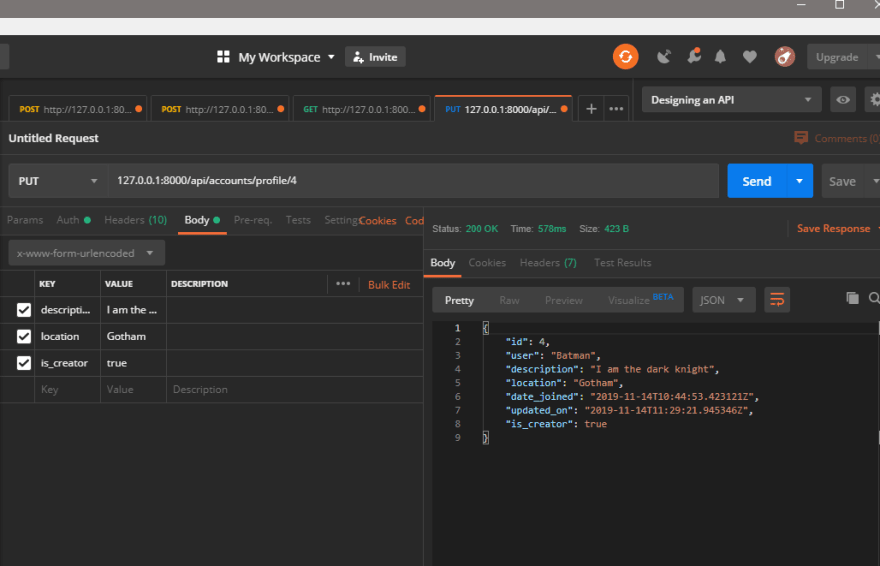 That's the end of this looong post 👀. I hope with this information you too can make your own RESTful API with django.
If you have any questions, feel free to leave a comment. You can also contact me through my website or on twitter.

Lewis kori
What you do makes a difference, and you have to decide what kind of difference you want to make.
How to programatically unzip files uploaded to google cloud storage buckets
#cloudskills #googlecloud #python #todayilearned
How to auto-refresh jwts using Axios interceptors
#javascript #vue #tutorial #vuex
User authentication with JWTS in a Django and vue.js multi-tenant app
#django #python #vue #tutorial

Once suspended, lewiskori will not be able to comment or publish posts until their suspension is removed.

Once unsuspended, lewiskori will be able to comment and publish posts again.

Once unpublished, all posts by lewiskori will become hidden and only accessible to themselves.

If lewiskori is not suspended, they can still re-publish their posts from their dashboard.

Once unpublished, this post will become invisible to the public and only accessible to Lewis kori.

Thanks for keeping DEV Community 👩‍💻👨‍💻 safe. Here is what you can do to flag lewiskori:

Unflagging lewiskori will restore default visibility to their posts.