Running through the 'zboxfs' code and these are some notes. Should be able to spin it up & get the general gist from what's written here, enjoy!

ZBoxFS is a random project that I had came across a few times prior and logged in my notes somewhere. However, very recently when researching a few solutions for a blockchain-based wallet (agnostic) that I was devising for Librehash members, I stumbled back onto their main repo once again.

You can all find that URL here - https://github.com/zboxfs/zbox

The project caught my eye for a few reasons:

In their 'readme', they state, "ZBoxFS is a zero-details, privacy-focused in-app file system. Its goal is to help application[s] store files securely, privately and reliably. By encapsulating files and directories into an encrypted repository, it provides a virtual file system and exclusive access to authorized application."

Curiously, it goes on to state, "Unlike other system-level file systems, such as ext4, XFS and Btrfs, which provide shared access to multiple processes, ZboxFS is a file system that runs in the same memory space as the application. It provides access to only one process at a time."

This unique property means that not only does this app encrypt on the fly, it also provides some level of isolation from the other processes / facets of the filesystem (on the OS its deployed on).

The very last listed feature is a huge one. Rust is our favorite language (up there with Golang, Python & C++ / C), for its memory-safety features as well as its robust community & surprisingly well-designed apps (which really feel like a 'hook up' everytime you run into one of them; this tool being case-in-point).

What's there not to love here? (we'll get into that soon, which will explain the rabbit hole that we went down just to get to this point).

Below is one of the diagrams Zbox provides on their GitHub to help readers visualize the difference between the way their software is instantiated versus other well known file systems and tools.

Which was then followed by a feature matrix. 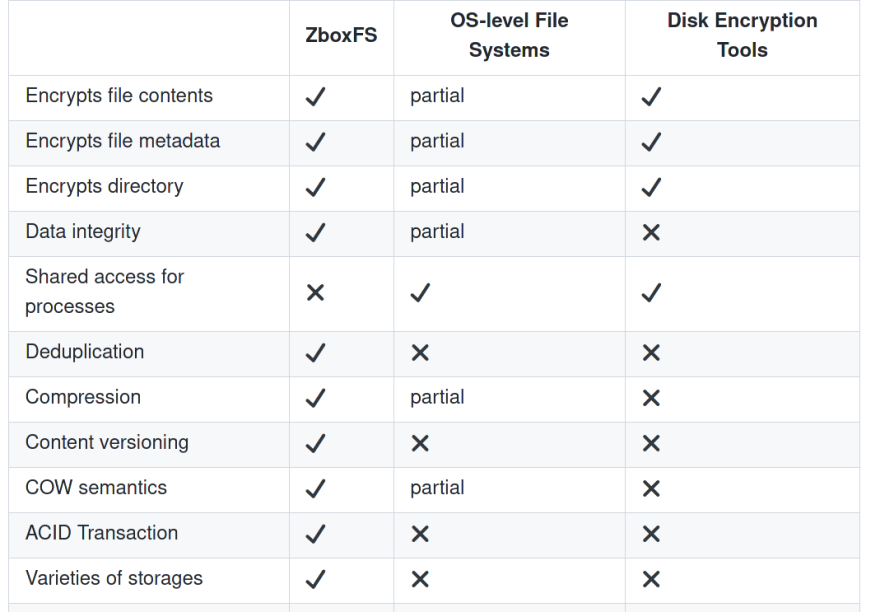 Below is a feature matrix that shows the different storage backend options that come with Zbox. 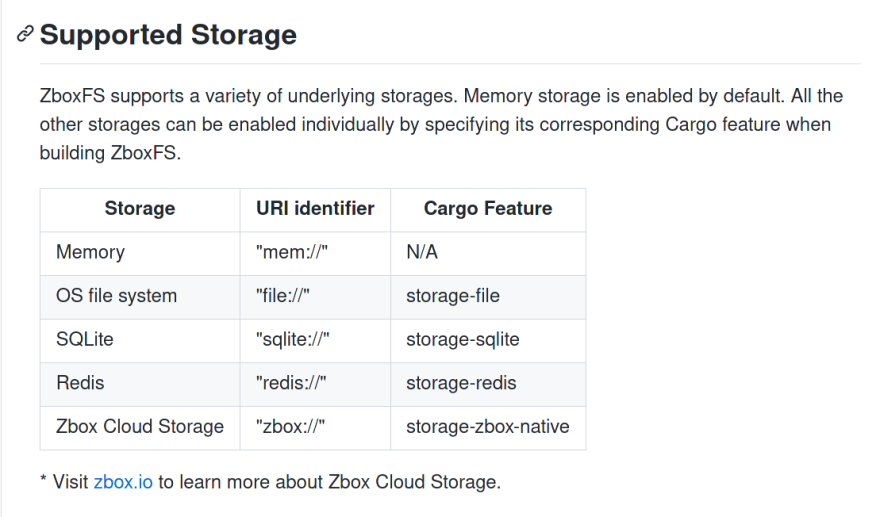 Rust-specific documentation can be found here at this link - https://docs.rs/zbox/0.9.2/zbox/

Running Through Some of the Mock Rust Code for ZboxFS

Since there are some easy-to-run examples provided right on their Rust project page, we'll extract those (in code blocks), for those that may be interested in running this code on their own personal machines (as they read).

The following code is said to be designed with the intent of showcasing how to 'create and open a repo using memory as underlying storage' (sort of like tmpfs / ramfs).

"*Discovery navigation can use

of the most ‘relevant’ ones for our endeavors (hint: most of them are going to be related to the memory handling of the k
This is one of the most important features of this app (since we don't have time to play Daniel Bernstein to someone else's project). Information about the cryptographic schemes baked into this project can be found here - https://docs.rs/zbox/0.9.2/zbox/enum.Cipher.html

Up to this point, this write-up has failed to mention that one of the libraries baked into this program is 'libsodium'. For those that don't know, 'libsodium' is one of the best open-source cryptographic libraries available to programmers (hence why you its in use so frequently).

There's one portion of the documentation that provides extensive information on the code / syscalls / declarations one would need to use in order to provision 'secure memory'.

"After use, sensitive data should be overwritten, but

Some additional recommendations given:

Disabling Core Dumps When Running Crypto Code (in order to ensure that sensitive data cannot be leaked out during the process itself). "This can be achieved using a shell built-in such as 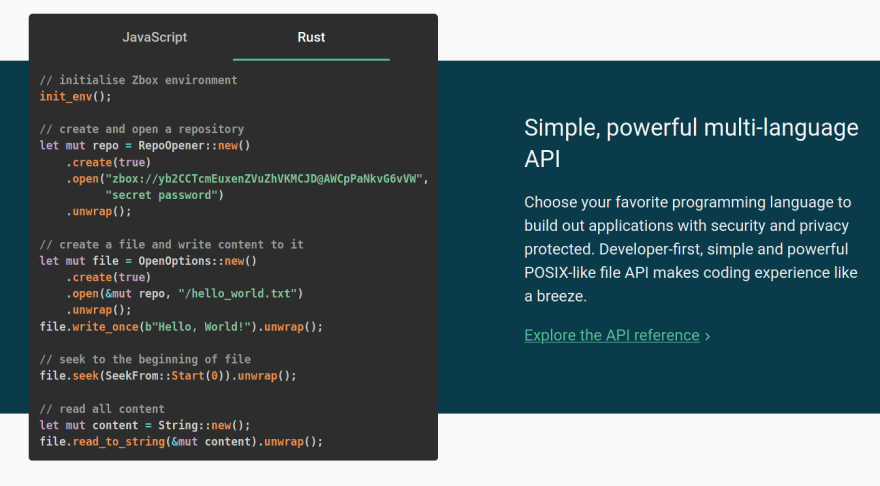 Of course, the kicker here is when they provide a preview of their architecture (geo-distributed cloud storage); enticing users to create an account / node / storage pool that they host & maintain. 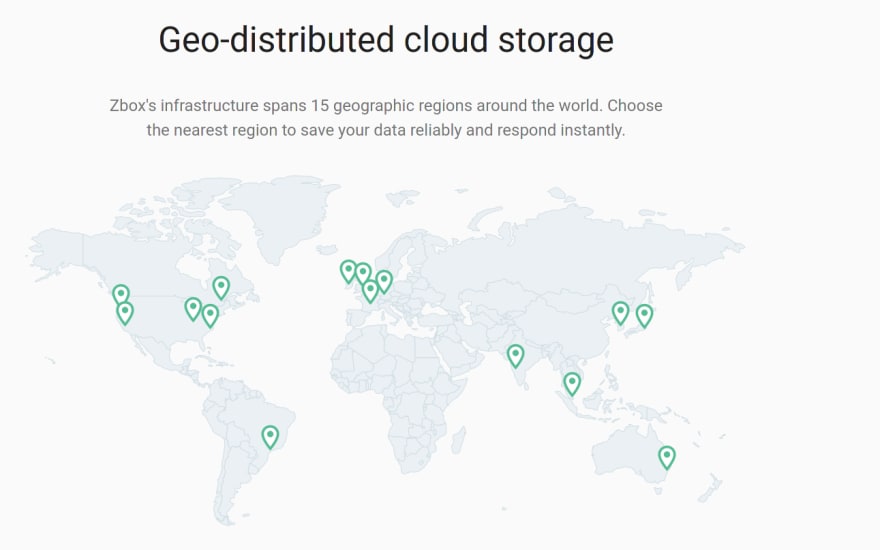 Fortunately for us, we can still definitely use the app spec as it is currently (but we're going to need to work at it a bit though first).

Additionally, we can provision this app in a way where we can be sure that the remote server we authenticate with (i.e., not 'zbox.io', but something provisioned by Librehash), will be 100% ignorant of the content being stored on the server (hopefully to the extent of not revealing any metadata about what's being encrypted remotely).

The references to the remote server provided by Zbox in their code can be edited (with trivial ease) to be replaced with our custom backend (alongside some authentication mechanisms to provide significantly enhanced security assurances against a potential MITM attack [in case there were a malicious entity attempting to phish / impersonate our desired target remote server storage]).

Specifically, there is reference code for Javascript, Rust, and Android (Java). We're going to focus on the Javascript for the time being (despite the fact the app is written in Rust); there's a reason why we're doing this [that will be explained at a latter point].

Diving into the API Reference 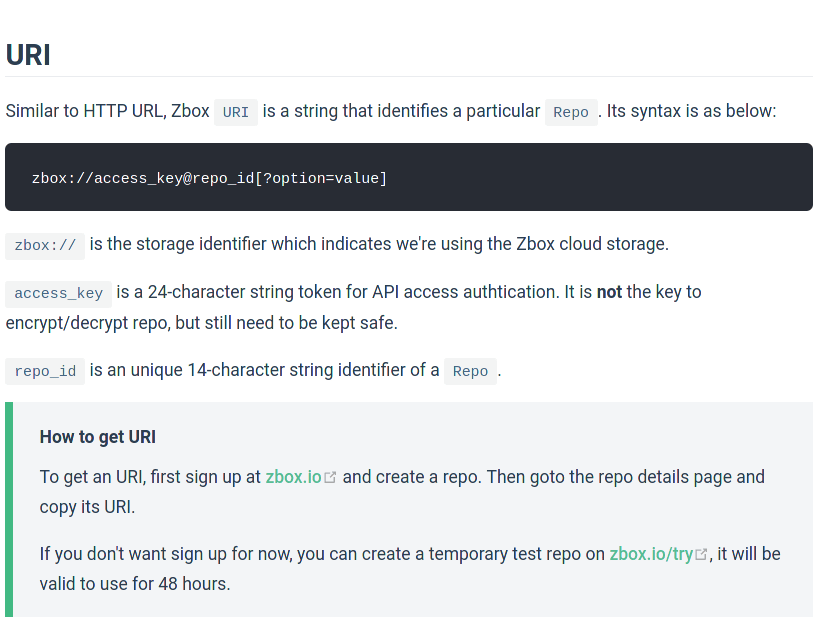 From the picture above, we can deduce that the only palpable change that needs to be made here is in the URL where the data will be stored (we'll get to explaining exactly what the replacement backend storage will be shortly).

As we can see below, the 'calling' style for this app (API; javascript), is very similar to what we've seen elsewhere (if you're someone that deals with API frequently).

Below is some boilerplate code that was prepared to demonstrate the iterated call style for this app.

Of course, the app comes with 'error handling' as well (nothing that we're going to spend too much time focusing on anyway).

The following configurations are relevantly important (this provisions the local / client-side encryption & derivation schemes via the provided KDF).