This is your moment.

You have put your blood, sweat, and tears into configuring Rails to work as an API. You are ready to unveil your API to the world so users can enter their data to be stored in your database.

Imagine the crowds roar as you roll out the red carpet. Your database is an exclusive club that everyone is dying to become a member of. Every candidate hopefuls must be screened at the door and go through rigorous interview process to earn a coveted membership to your database!

This is where strong params and validations come in. Think of strong params as a screen list written for a bouncer. This list specifies traits that a candidate must exhibit in order to enter the club.

Ready to raise the standards of granting membership to your database? Let's get started.

We will be using a free tool called Postman to test our strong params and validations. Download Postman

You are tasked with creating a database of top secret spy agents stationed around the world. When your database is integrated with the frontend, the Head of Intelligence Service should be able to view the agent's name, alias, organization, and current location. He/she should also be able to create a record of a new spy agent.

Your mission should you choose to accept it is to create a database that would save spy agent data ONLY if it meets the following requirements:

You will notice that steps 1-5 of this blog are very similar to steps in my previous blog post:Beginner's guide to creating an API from scratch using Rails.

Background info on these steps have been omitted to focus blog's scope to strong params and validations. If you need further explanation on steps 1-5 or about Postman, check out my previous blog post above.

In the directory of your choosing, type the following into your terminal. This command will create a new Rails API named secret_spy_api.

Change into secret_spy_api directory and open the API by typing the following into your terminal.

In the file explorer of your newly created Rails API, expand the following directories to open cors.rb file.

In your file explorer, scroll all the way down and open Gemfile.
Un-comment line 26, gem 'rack-cors'

In your terminal, run bundle install.

You will see that this command has created following files in one swoop! To help you find these files, the file directory is included in the second line.

NOTE:20200531204206 is a timestamp that denotes the time and date I have created the migration file. Your file will have a different timestamp.

STEP 4: Specify attributes and datatypes of a spy

You should see the following output in your terminal if migration has been successfully completed.

In your db directory, open schema.rb.
You will see that this file now displays your data structure.

STEP 5: Define strong params in controller and set up index and create actions

Copy and paste the following in your spies_controller.rb .

Recap
Remember the bouncer and interviewer analogy mentioned in the beginning of this blog?

The bouncer(controller) for our exclusive club(database) has a strict screen list(strong params) called spy_params. This screen list instructs the bouncer to only let in candidates(data) with resumes that mention certain traits(attributes). The candidates whose resume does not mention these attributes are prevented from entering our club for further interviews.

STEP 5: Set up validations in model

Recap
Once the bouncer lets candidates through the club doors, our interviewer(model) will further assess whether the candidate is worthy of being a member of our club.

Sure, everybody looks good on paper(he/she has all the attributes specified on strong params), but are these candidates really who they say they are?

If not, the candidate is sent home and is not created as an instance in the database.

Copy and paste the following in your routes.rb

STEP 7: Fire up your server & postman to test strong params and validations.

Run the following command in your terminal to run your server.

Get, button with red arrow pointing to it is a HTTP method button. If you click on downward facing arrow, you will see drop down options for other HTTP methods. We will be using POST HTTP method to test our strong params and validations.

URL, a gray bar with a blue arrow pointing to it is where we will enter the URL of our API server.

Send, a blue button with green arrow pointing to it will be pressed to send the info to our backend to get a response. 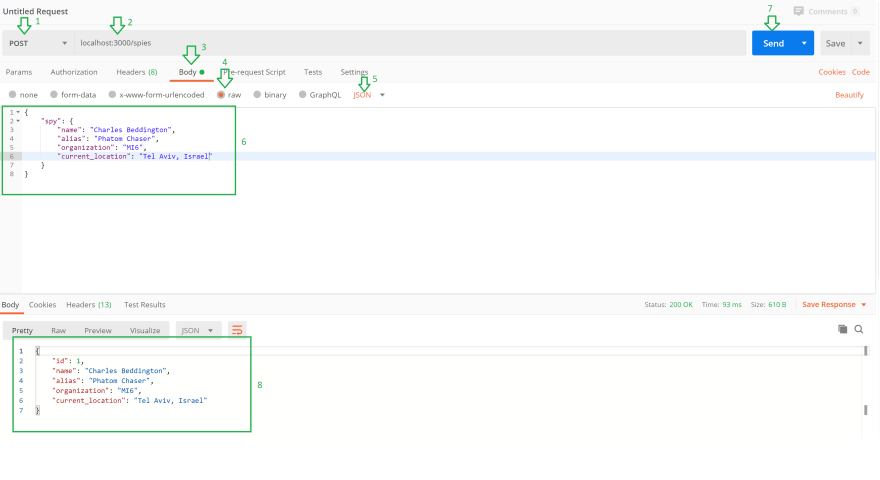 The numbers in the image corresponds to the numbered steps listed below.

Note: I had trouble uploading images to Dev.to. All uploaded images look a bit blurry so I have copied and pasted the data input and response separately so you can see it clearly.

** TEST STRONG PARAMS AND VALIDATIONS**
We have set strong params and validations so that an instance of a spy can be created ONLY if :

So let's put it to the test!

Test 1: Omit one of the attributes
Let's purposefully omit the organization of a new spy agent's data input and see what happens. 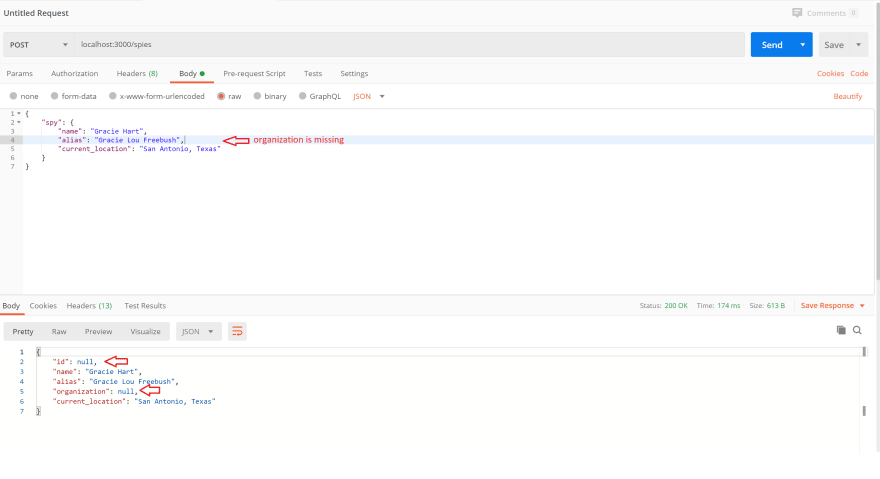 Once you include the organization info and send the post request again, you will see that Agent Gracie Lou Freebush has been successfully saved to the database with an id number of 2.

Test 2: Enter the same alias for a different instance of spy agent 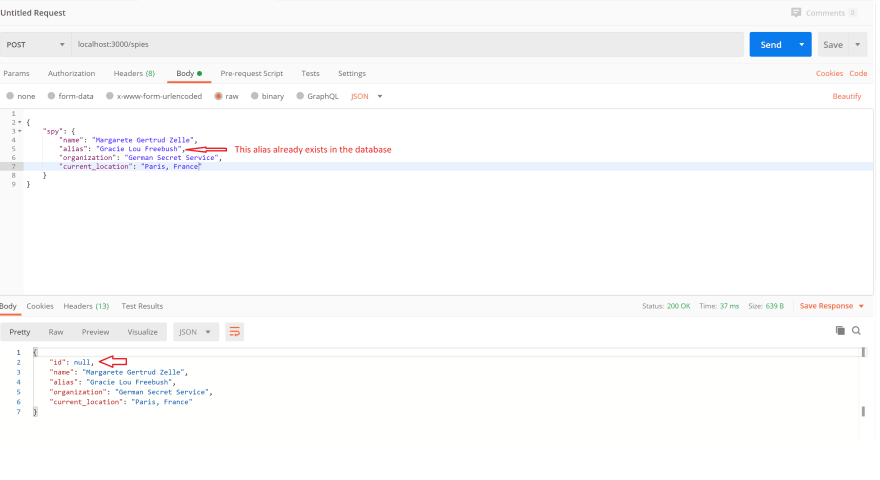 We sent data input about a new spy agent but with the same alias as the one we have created prior. As you can see, the request returned an object with an id of null which means that the new spy agent data failed to be saved in the database.

Test 3: Enter an alias with less than four characters 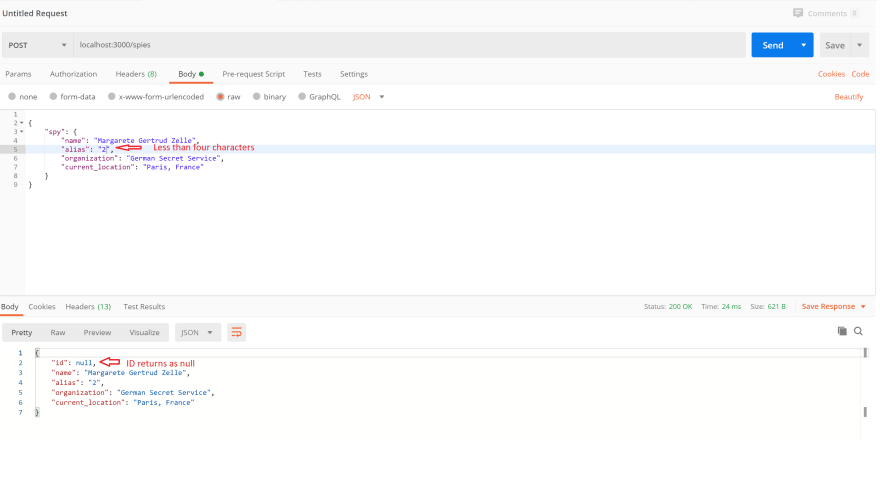 You will see that when we enter alias with less than 4 characters, the response returns an object with id of null. The new agent did not get saved in our database.

If you fix the data input so that all attributes are present, alias is unique and is longer than four characters, you will see that it successfully saves a new spy agent! 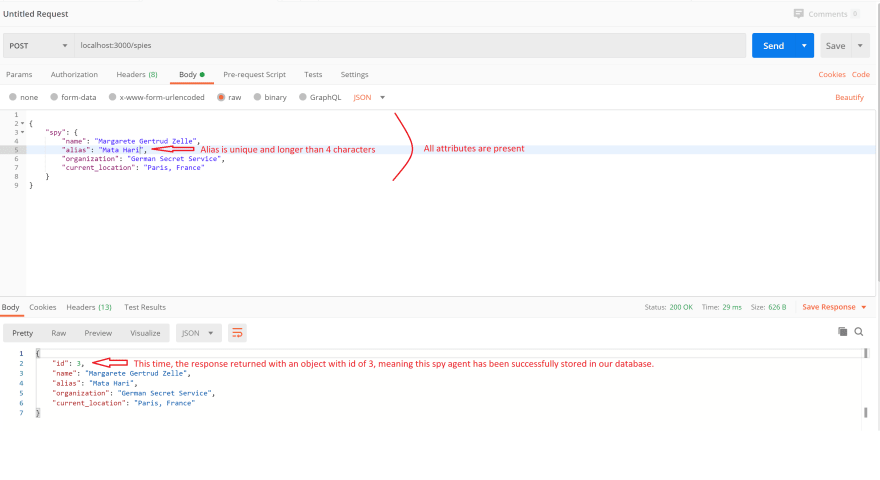 Congratulations. You have successfully set up strong params and validations in the secret spy database by following these 7 steps:

This message will self destruct in five seconds.

Once suspended, lisahjung will not be able to comment or publish posts until their suspension is removed.

Once unsuspended, lisahjung will be able to comment and publish posts again.

Once unpublished, all posts by lisahjung will become hidden and only accessible to themselves.

If lisahjung is not suspended, they can still re-publish their posts from their dashboard.

Once unpublished, this post will become invisible to the public and only accessible to Lisa Jung.

Thanks for keeping DEV Community 👩‍💻👨‍💻 safe. Here is what you can do to flag lisahjung:

Unflagging lisahjung will restore default visibility to their posts.