What can I say about the first Live Coders Conference? I think I have to mention a little back story as well, how I got involved. The end result was a 17hour live stream on Twitch.tv with over 1 million channel views, a peak of more than 15,000 viewers, an average of over 3,000 viewers over that 17 hours and 3.2 million minutes watched (yes 6 years watch time).

At the start of March 2020 a Live Coder team member by the name of Ted Young a.k.a JitterTed wrote a simple line in the Live Coders Discord server. "Should we do a Live Coders Conference?". Things escalated quickly, within the first week we had a spreadsheet full talks, around 38 from 14 speakers.
I volunteered to take a look at the tech, we wanted to broadcast from a single Twitch channel with no breaks, i.e. not turning the stream off between speakers and treating it as a single program or two depending on the number of speakers we had.

Two weeks on the 16th of March came along. It was time to pick our speakers and organize what we were going to give. At this point, I had somehow become a lead organizer of the conference (luckily not for too long). I have no idea how or why but I rolled with it, as it would be a fantastic experience.

We chose our speakers, decided on a single day conference of 14 speakers, on the 9th April split between 2 individual 7hour streams. So we are sorted, right? No, we had theming, advertising, speakers & MCs to set up the tech with, find a way of producing the event, moderation and much more in not a large amount of time with everyone on the team having day jobs and/or little time to commit to the organization of the event.

I'm here today not to talk about the organization and lessons learned from the whole event. I'm here to take you through the full tech setup we used and some of the failings myself and the rest of the team would like to look into for future conferences.

We used Microsoft Azure to host all external services that the speakers or MCs did not need to control.

With the aim of having speakers and MCs all routed through to a single Twitch channel without disconnecting between each speaker or presenter, we chose to have an RTMP server act as a middleman between the broadcasters and the production broadcast software.

Real-Time Messaging Protocol was originally used by Macromedia for audio streaming, however now this includes a lot more. It is almost "the standard way" of broadcasting video. It is also available in most standard broadcast software like OBS, Wirecast, VMix etc.

How to set up an RTMP server

This is done in the same way as creating the RTMP VM however there are several changes to be made while doing this.

That's it software install complete. On install of VLC, you get an added extra in OBS which is VLC Media Source. This can be used to listen to RTMP streams, I was looking into this however as I said before wasn't going to use it. I eventually did during the 17+ hour stream.

Using the broadcast VM as a producer

The broadcast VM and RTMP server were ready to roll, ready to go. So how did I set up OBS and VLC on the server so we could broadcast to the viewers?

The following scenes where created:

The images here is the scene setup and how the Media Source component was set up for the RTMP streams. As you can see we set the input to rtmp://{Internal IP}/live/{stream key}. The important thing to NOTE here is: Use the internal IP address of the rtmp server in your VM. So the traffic between RTMP and Broadcast server is not counted as external data transfer out of Azure 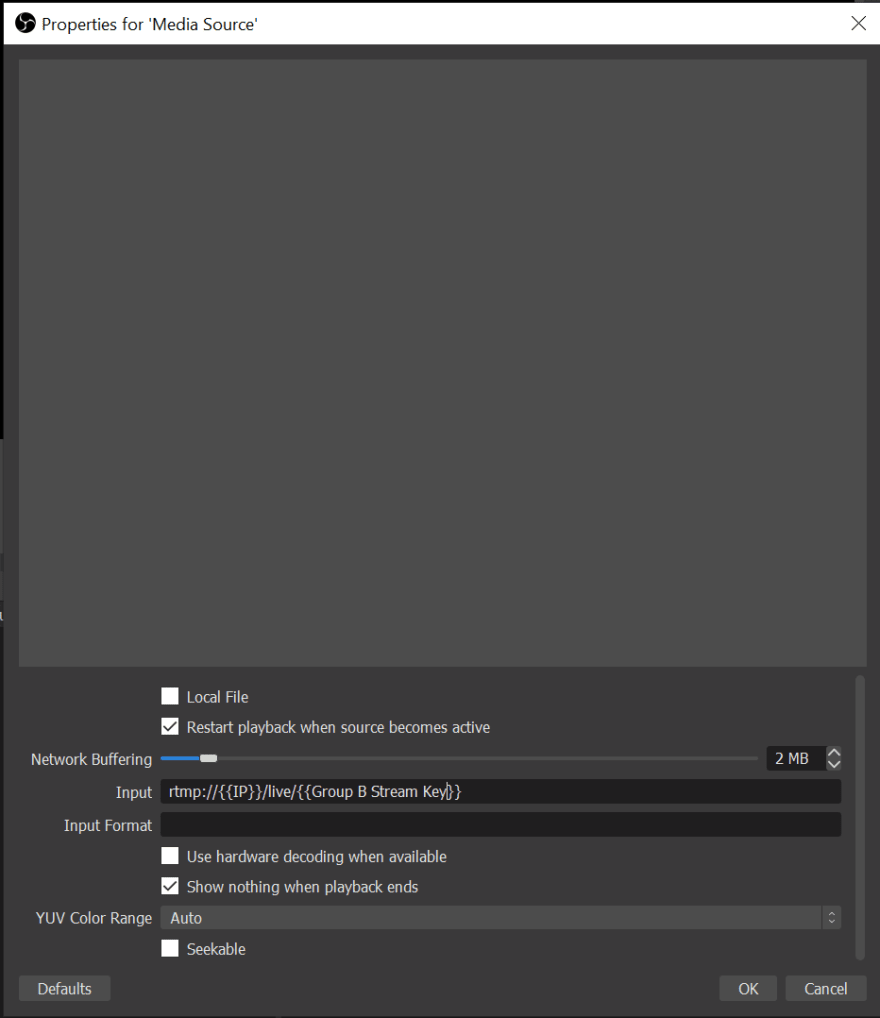 My Job as producer

As a speaker or MC of The Live Coders Conference, you were given a stream key by myself. This is to uniquely identify you in the RTMP streams I was receiving.

MCs were given a single stream key as there was going to be a gap between their sections of the conference.

Each speaker or MC would go into OBS or their broadcast software of choice, select a custom server to stream to and use the Public IP address of our RTMP server. The URL used would have been something like rtmp://{IP}/live. The stream key was used as the stream key.

This example is how OBS is the setup: 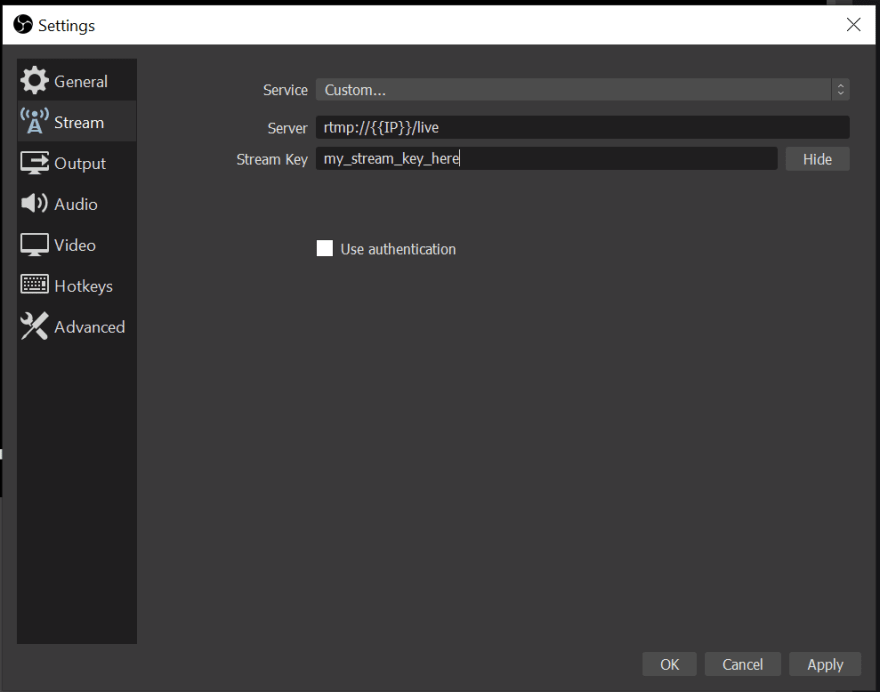 When the speaker was about to start their talk they would connect their broadcast to the rtmp stream, which I then picked up.

Each speaker and MC was given a package of theme items to use during the broadcast and set up their own scenes within broadcast software to do this.

Each speaker had their own hardware and software which I was not responsible for, however, I will talk about this in issues.

So down to the issues I faced:

A 20hour shift is not something I want to try again.

I woke up on the morning of the conference at 6am BST, a full 7 hours before I was running a stream that would last 17+ hours. This was the doing of my 3 and a half-year-old and something that I should have planned for. By the time it got to 24 hours later at 6am BST on the 10th of April I was "DONE".

Have more backup, especially for the producer.

Only one person knowing the tech inside out, knowing all the passwords was not a great idea. I had a backup, it was wasn't a great one and very last minute.

RTMP is a bit flaky at times

I need to look at new tech or make sure our RTMP setup is rock solid. I think it was partially RTMP and partially the way I used it which made some things go a little wrong

I want to do this again, I want to produce a couple more at least. There are plans and more research to be done. Improve on what we did, the stats speak for themselves, it was an amazing event. However, I feel there were definitely points we could improve on and I hope to correct some of the mistakes I made.

If you have any questions please ask, I would love to expand on every section of this article down the line. Take each part and do a full rundown on why.

Clean Architecture: The concept behind the code

Storage vs Memory vs Calldata - Understanding Data Locations in Solidity