In this post, we’re going to cover the properties of these 4 formats — CSV, JSON, Parquet and Avro with Apache Spark.

CSV files (comma separated values) are commonly used to exchange tabular data between systems using plain text. CSV is a row-based file format, which means that every line of the file is the row in the table. Basically, CSV contains a header row that provides column names for the data, otherwise, files are considered partially structured. CSV files cannot initially present hierarchical or relational data. Data connections are typically organized by using multiple CSV files. Foreign keys are stored in columns of one or more files, but the links between these files are not expressed by the format itself. Also, CSV format is not fully standardized, files can use delimiters other than commas, such as tabs or spaces.

One of the other properties of CSV files is that they are only splittable when it is a raw, uncompressed file or when splittable compression format is used such as bzip2 or lzo (note: lzo needs to be indexed to be splittable!).

Despite the limitations, CSV files are a popular choice for data sharing, as they are supported by a wide range of business applications, consumer and scientific applications. Similarly, most batch and streaming data processing modules (for example, Spark and Hadoop) initially support serialization and deserialization of CSV files and offer ways to add a schema when reading.

JSON data (JavaScript object notation) is represented as key-value pairs in a partially structured format. JSON is often compared to XML because it can store data in a hierarchical format. Child data is presented by parent data. Both formats are self-describing and readable by the user, but JSON documents are usually much smaller. Therefore, they are more often used in network communication, especially with the advent of REST-based web services.

Since a lot of data transferring is already using JSON format, most web languages initially support JSON or use external libraries to serialize and deserialize JSON data. Thanks to this support, JSON is used in logical formats by presenting data structures, interchange formats for hot data, and cold data stores.

Many batches and stream data processing modules natively support JSON serialization and deserialization. Although the data contained in JSON documents can ultimately be stored in more performance-optimized formats, such as Parquet or Avro, they serve as raw data, which is very important for reprocessing data (if necessary).

Launched in 2013, Parquet was developed by Cloudera and Twitter to serve as a column-based storage format, optimized for work with multi-column datasets. Because data is stored by columns, it can be highly compressed (compression algorithms perform better on data with low information entropy which is usually contained in columns) and splittable. The developers of the format claim that this storage format is ideal for Big Data problems.

Unlike CSV and JSON, Parquet files are binary files that contain metadata about their content. So, without reading/parsing the content of the file(s), Spark can just rely on the metadata to determine column names, compression/encodings, data types and even some basic statistics. The column metadata for a Parquet file is stored at the end of the file, which allows for fast, one-pass writing.

Parquet is optimized for the Write Once Read Many (WORM) paradigm. It's slow to write, but incredibly fast to read, especially when you're only accessing a subset of the total columns. Parquet is a good choice for read-heavy workloads. For use cases requiring operating on entire rows of data, a format like CSV or AVRO should be used.

The advantages of data storage in Parquet:

The basic idea of predicate pushdown is that certain parts of queries (the predicates) can be "pushed" to where the data stored. For example, when we give some filter criteria, data store tries to filter the records at the time of reading from disk. Advantage of predicate pushdown is fewer disks I/O will happen and hence performance would be better. Otherwise, whole data would be brought into memory and then filtering needs to be done, which results in large memory requirement.

This optimization can drastically reduce query/processing time by filtering out data earlier rather than later. Depending on the processing framework, predicate pushdown can optimize your query by doing things like filtering data before it is transferred over the network, filtering data before loading into memory, or skipping reading entire files or chunks of files.

This concept is followed by most RDBMS and has been followed by big data storage formats like Parquet and ORC as well. 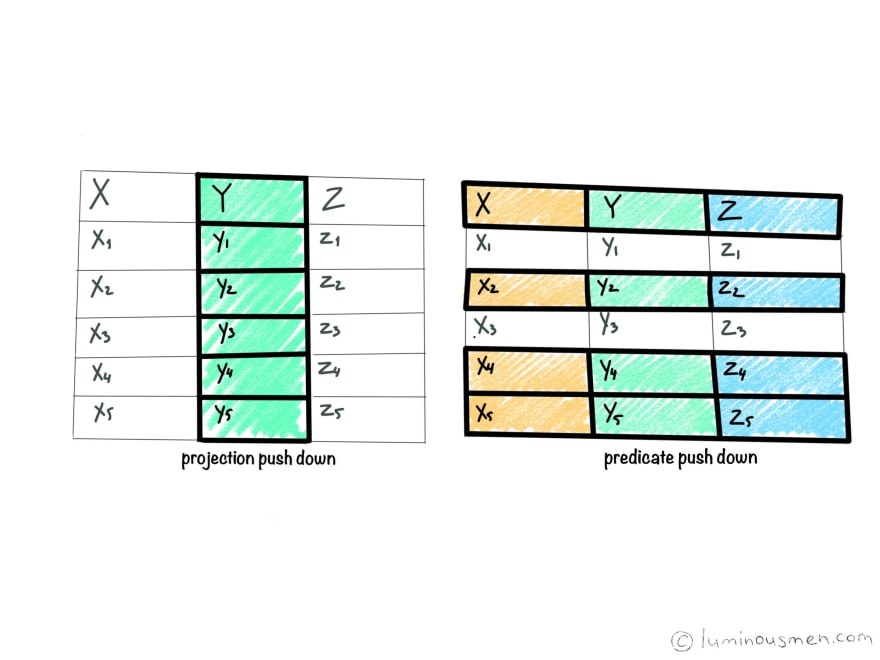 When data is read from the data store, only those columns would be read which are required as per the query, not all the fields would be read. Generally, columnar formats like Parquets and ORC follow this concept, which results in better I/O performance.

Apache Avro was released by the Hadoop working group in 2009. It is a row-based format that is highly splittable. It also described as a data serialization system similar to Java Serialization. The schema is stored in JSON format while the data is stored in binary format, minimizing file size and maximizing efficiency. Avro has robust support for schema evolution by managing added fields, missing fields, and fields that have changed. This allows old software to read the new data and new software to read the old data — a critical feature if your data has the potential to change.

With Avro’s capacity to manage schema evolution, it’s possible to update components independently, at different times, with low risk of incompatibility. This saves applications from having to write if-else statements to process different schema versions and saves the developer from having to look at old code to understand old schemas. Because all versions of the schema are stored in a human-readable JSON header, it’s easy to understand all the fields that you have available.

Avro can support many different programming languages. Because the schema is stored in JSON while the data is in binary, Avro is a relatively compact option for both persistent data storage and wire transfer. Avro is typically the format of choice for write-heavy workloads given its easy to append new rows.

* JSON has the same problems with splittability when compressed as CSV with one extra difference. When “wholeFile” option is set to true (re: SPARK-18352), JSON is NOT splittable.

Life Beyond Kafka with Apache Pulsar

Why we chose Apache Spark for ETL (Extract-Transform-Load)

Once suspended, luminousmen will not be able to comment or publish posts until their suspension is removed.

Once unsuspended, luminousmen will be able to comment and publish posts again.

Once unpublished, all posts by luminousmen will become hidden and only accessible to themselves.

If luminousmen is not suspended, they can still re-publish their posts from their dashboard.

Once unpublished, this post will become invisible to the public and only accessible to luminousmen.

Thanks for keeping DEV Community 👩‍💻👨‍💻 safe. Here is what you can do to flag luminousmen:

Unflagging luminousmen will restore default visibility to their posts.