Hey everyone, this is just an article portraying some basics of Java. Those who are new to Java, welcome to Java club and those who already know Java just jog your memory 😀.

Java is a high-level, class-based, object-oriented programming language that is designed to have as few implementation dependencies as possible. It is a general-purpose programming language intended to let programmers write once, run anywhere (WORA) - Just Wikipedia stuff but makes sense though🤷‍♂️.

Object-oriented programming is programing paradigm based on objects. This will help in increasing the modularity and reusability of code. It is the opposite of procedural programming.

Basically, an object is a subway wrapper which wraps data(veggies) and methods(taste). So, if you want two types of taste you can order two different wrapper and so you can see the modularity here. This doesn’t convey the proper meaning but it does make some sense I guess at least for those who love wrappers🌯🌯🌯🌯🥳🥳🥳. To be honest I haven't even tasted one of these 😁.

More about class and objects will be covered in the next articles💡. 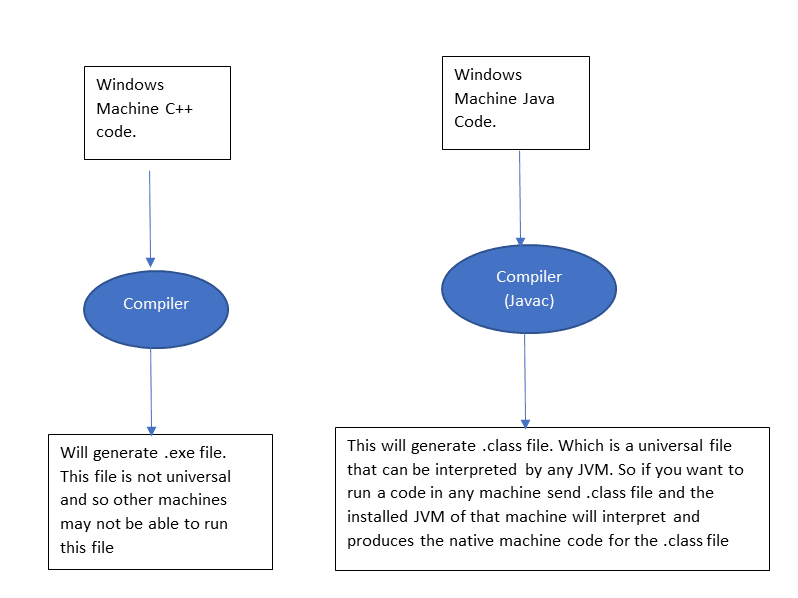 But how this helps?? Once we compile our program usually it will convert to native machine code as I said earlier. So, the code has to be ran in each different machine to generate their specific machine codes for our program. But in case of java, we have to supply the bytecodes only.

Irrespective of which machine we supply our bytecodes to and if the machine supports JVM it will convert them to native machine code and run the same.

Now some genius might think what if we can manipulate the bytecode and run them so can we can get some advantages. Sorry man the code will get corrupted bytecode verifier will catch you 😎.

This article is going endlessly, so will see you all in the next article until then good bye, take care🙌.

Once suspended, mahadev_k will not be able to comment or publish posts until their suspension is removed.

Once unsuspended, mahadev_k will be able to comment and publish posts again.

Once unpublished, all posts by mahadev_k will become hidden and only accessible to themselves.

If mahadev_k is not suspended, they can still re-publish their posts from their dashboard.

Once unpublished, this post will become invisible to the public and only accessible to Mahadev K.

Thanks for keeping DEV Community 👩‍💻👨‍💻 safe. Here is what you can do to flag mahadev_k:

Unflagging mahadev_k will restore default visibility to their posts.