Whether you are just starting out or have been using Flutter for a few years, there's one topic that always comes up and has a thousand perspectives revolving around it: state management.

On previous occasions I have already spoken enough on this subject, so I better leave you references to these talks that I have given:

😓 The videos I'll quote or suggest you to watch are in Spanish because that's my mother tongue. So I apologize for that.

First of all, Provider

You're probably already familiar with the Provider package, which isn't exactly a state manager, but a friendlier way to use InheritedWidget. If you don't know anything about InheritedWidget, here I have a video for you.

Simply put, Provider allows us to use InheritedWidgets to work with classes or more atomically, values, to handle our state. That makes Provider a tool for communication between widgets, not for state management as such.

If at this precise moment I'm destroying the concept you had of Provider, I'm accomplishing my mission. The plan is not to confuse you, it is for you to better understand why StateNotifier, which is the subject of this article. We'll get to that, calm down.

Provider itself can provide you with information, just like an InheritedWidget does. But the state managers are the classes that contain that data that Provider has. Got it?

I call BLoCs or business logic components to those classes. They're in charge of managing this information interacting with external data sources (an API, for example) through data access classes (services or repositories). And basically the BLoC pattern is followed there, I also have a video talking about it at this link.

The classes used with Provider are usually ChangeNotifier, ValueNotifier or some custom class that extends from these. They're classes that notify -as their names say- to others (widgets included) that are consuming their properties (through Providers). That's the most typical and one of the simplest and most initial ways of handling state with Flutter.

I clarify, there are other packages that use Provider for communication of its logic components with its user interfaces.

Some of them are bloc and mobx.

ChangeNotifier is a good alternative to create classes that serve as BLoC. But as you may know about me - if you read my other articles - I really enjoy modularizing my code and to extract my logic in other packages and making them as uncoupled as possible, that's when it's not enough for me. This mostly because of its dependency on Flutter.

I like to create my packages separately with the least amount of dependencies possible. If I can avoid the Flutter SDK, better.

I propose this case...

🤔 I'm creating my app logic in Flutter that I can reuse with other interfaces, so I make it a package. That same logic is useful to me for another app that allows me to call Dart code directly, let's remember that Dart can be compiled into binary and that opens it up to more use cases than just apps with Flutter. I already have the logic, but I use ChangeNotifier, which makes me unnecessarily dependent on Flutter.

StateNotifier is another type of class that serves as a logic component and is a "reimplementation" of ValueNotifier, with the difference that it doesn't depend on Flutter.

This package with the functionality of ValueNotifier abstracted, gives us the power to reuse our logic without depending on Flutter, as we wanted. Plus it has a better integration with Provider, because both were made by the same author.

After having learned a lot about flutter_bloc and its structure, I understood how handling states as classes was much more convenient and helped to modularize your widgets based on the current state in the Bloc.

StateNotifier has a lot of things similar to Bloc, including:

💡 One difference is that StateNotifier assigns the state to the protected variable state (equivalent to value in ValueNotifier) and Bloc uses the word yield to emit a state so it uses Streams for stream data.

And that's a simple example of how to start using StateNotifier instead of ChangeNotifier or ValueNotifier.

You can see that another flutter_state_notifier package is used. As well as other packages like bloc and flutter_bloc, a package with the prefix flutter is included since this is the one that contains widgets that are useful to integrate the another package with your user interface. In this case it works for us to use the StateNotifierProvider class.

In step 2 of the previous part, you can see that we created an abstract state that can be used by any class through inheritance. This is a practice that I first saw in Bloc, where defined events alter the current state of a BLoC. It's very good because we define in the BLoC that we're going to send a state that inherits from an abstract state, as we saw in the example.

With StateNotifier, this is excellent when passing a specific type of data (our abstract state) and assigning it as we need.

The problem with this is that it gets a bit slow and we write boilerplate code when we have several possible states. For this reason, we are including another package called Freezed, which works amazingly with StateNotifier.

We can simplify the code with a Freezed union, it would look like this...

If you would like to know more about Freezed to know how to autogenerate the above code and what it means, I suggest you read my article about this package here.

Rémi Rousselet, creator of Provider, StateNotifier and Freezed, has maintained and created pull requests to the official Flutter repository to improve ChangeNotifier. 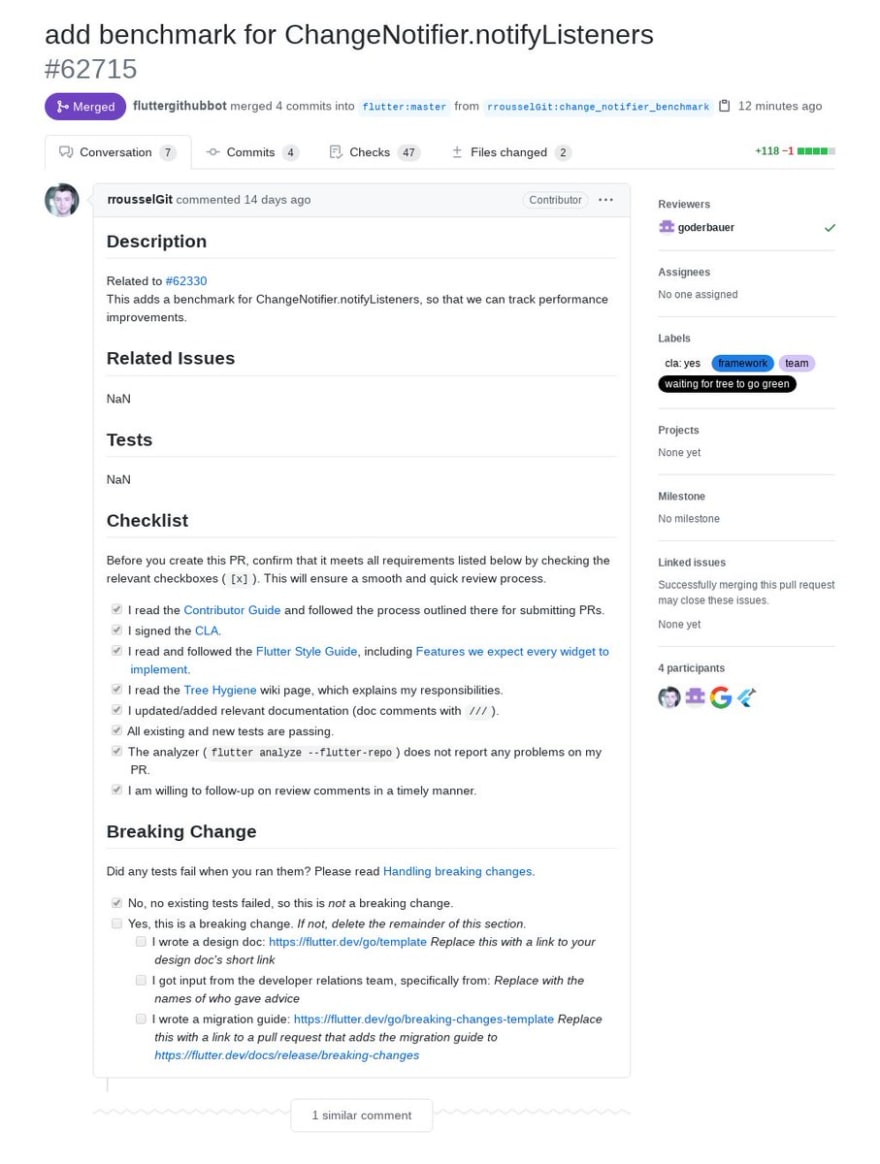 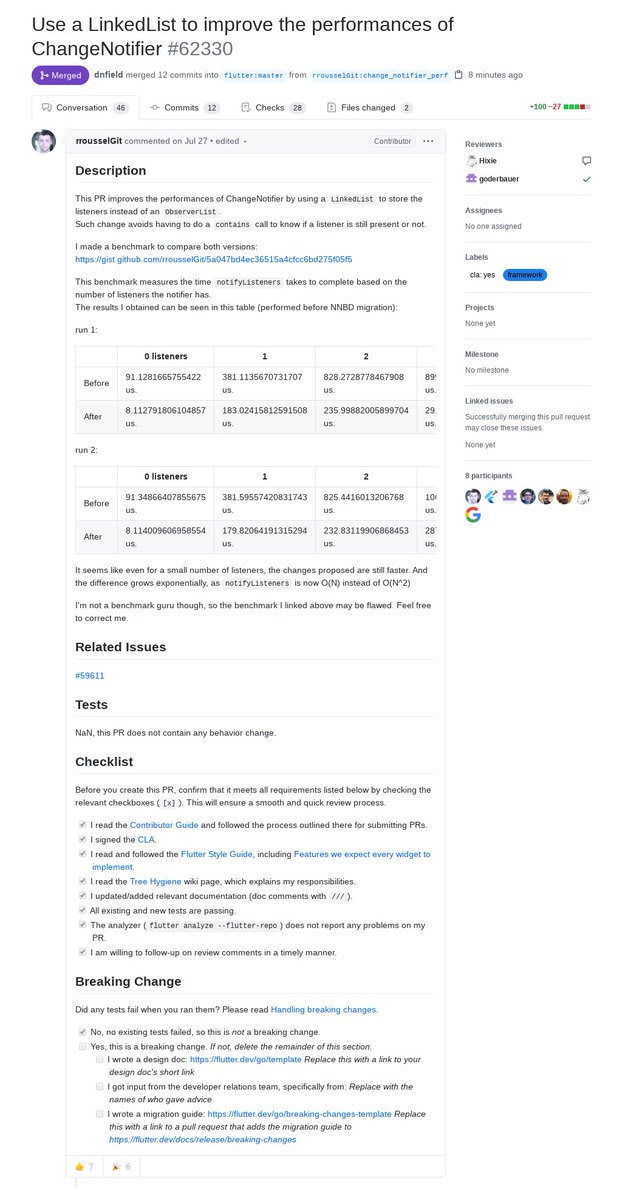 #Flutter Pull Request 'Use a LinkedList to improve the performances of ChangeNotifier' by @remi_rousselet was merged into master github.com/flutter/flutte…

So it doesn't mean that StateNotifier is a successor. As usual:

It's one more option that you can choose.

I personally use StateNotifier with Riverpod, the Provider rewrite, and I quite like the combination as Riverpod includes it by default. Handling states much like the way flutter_bloc does seems very convenient and makes code more predictable (which is very good). All this added to the fact that the state assignment syntax is simpler and facilitates its emission. 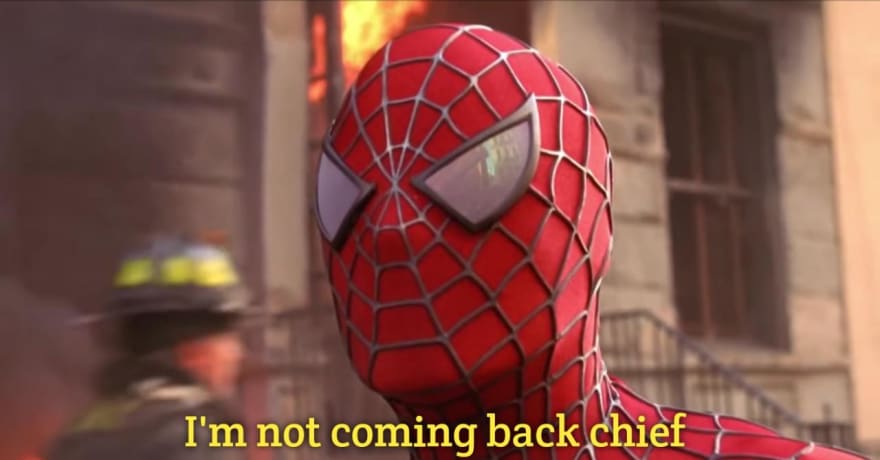 You can share this article to help another developer to continue improving their productivity when writing applications with Flutter.

There's a Spanish version of this article on Medium. You're welcome. 🇪🇸

How not to get crazy with FlutterFire Crashlytics

How to add Firebase Email Verification to your Flutter App