In which I almost didn't notice a mistake

I was able to track down a subtle but important error I was making when using constructors with sub-classes and manually setting prototypes.

Consider the following code (from an implementation of rock-paper-scissors):

While the error ended up not being a major issue here, notice where the move property of player1 and player2 is initially stored - the object referenced by HumanPlayer.prototype - and this object is shared by all HumanPlayer objects! 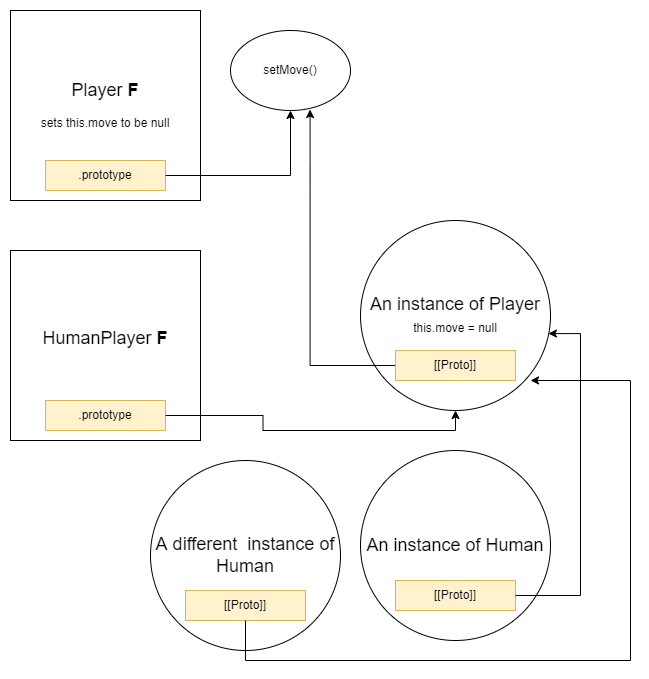 Both players access their move property from Human.prototype - meaning they share this.move! Let's confirm this by checking the value of move using getPrototypeOf()

Not only does player1 not have an own property move, setting player2.[[Prototype]].move to paper is accessed by player1.move! We don't actually have move defined as individual state for each instance of HumanPlayer

When invoking this function using player1.setMove('paper'), this refers to player1. Since player1 doesn't have an own property move, one is created! Each player calls setMove(), each now has their own move property, and the move on HumanPlayer.prototype is never used again.

We got lucky - this time. How to properly fix this?

Once suspended, martinandersongraham will not be able to comment or publish posts until their suspension is removed.

Once unsuspended, martinandersongraham will be able to comment and publish posts again.

Once unpublished, all posts by martinandersongraham will become hidden and only accessible to themselves.

If martinandersongraham is not suspended, they can still re-publish their posts from their dashboard.

Once unpublished, this post will become invisible to the public and only accessible to Martin Graham.

Thanks for keeping DEV Community 👩‍💻👨‍💻 safe. Here is what you can do to flag martinandersongraham:

Unflagging martinandersongraham will restore default visibility to their posts.