In a previous post we saw how to build a single-node Docker Swarm running VASmalltalk. That stack involved one web server (Traefik) load balancing across 10 VASmalltalk images running a Seaside web application. All containers in same node.

Before getting started, know that the code has been published on Github in the same place as the previous posts.

The single-node of the previous post was a Raspberry Pi 3B+ running Raspbian 32 bits. But VASmalltalk can also runs 64 bits (x86, ARM, etc). In part, thanks to libffi and LLVM portable and power capabilities. So… I prepared the ubuntu node of our cluster with a Ubuntu Server 18.04 ARM 64 bits running in the Raspberry Pi 3B+

But to be able to call it “a cluster” I need at least one more node, right? Getting another Raspberry Pi 3 with Raspbian was boring. So Instantiations purchased me a different device, also being able to run 64 bits: the Rock 64. This is an incredibly nice machine with much more power than the Pi3 in some regards (4GB of RAM, eMMC, etc). I had Raspbian and Ubuntu Server already so for this rock node I installed Armbian Debian Stretch (BTW, runs very very nice and stable!)

Cluster conclusion: ubuntu node with Ubuntu Server 18.04 on Raspberry Pi3 and rock64 node with Armbian on a Rock64. All 64 bits.

In the previous post, before starting the swarm we executed docker swarm init. That made that single node be the “manager” of the cloud. But on a real cloud, you have managers and workers nodes. Usually there is 1 manager node and N worker nodes. However, as far as I understand, there are cases where there could be more than 1 manager. But for the moment, let’s just take 1: the rock64​.

The first step is to go to the manager (rock64) and execute docker swarm init if you haven’t done it before. Then, run docker swarm join-token worker. That will print something like below:

Then, go to each of the worker nodes and execute that docker command in the previous step. If that worker was already on a swarm, you would need to first do docker swarm leave. In this example, I did it for ubuntu node.

And that’s all! The Docker Swarm should now have 2 nodes. You can use docker node ls to confirm the results:

You can notice how rock64 “Manager Status” is “Leader” while ubuntu is not.

The docker-compose.yml of this example is the following:

The only particularities for running inside a Swarm are:

The way to start the swarm is exactly the same as the previous post, as it doesn’t matter (it’s transparent) how many physical nodes are inside that cloud. Same goes for all service commands we saw before.

The only important part here is that the seaside-debian-slim should have been already built in each node or available at some registry. See previous post for more details.

Below you can see the full sequence: 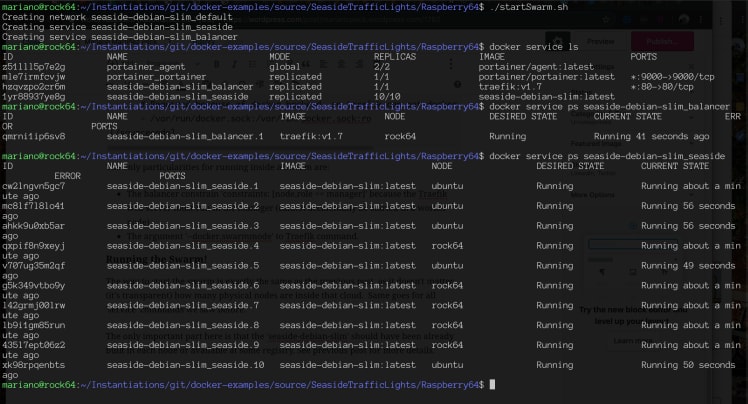 You can see how easy it is to scale to multiple nodes. In this example I just used 2, but normally you could have many more nodes. It’s also nice to see how it helps for availability. See what happens when I disconnect (power-off) of the workers (ubuntu in this case): 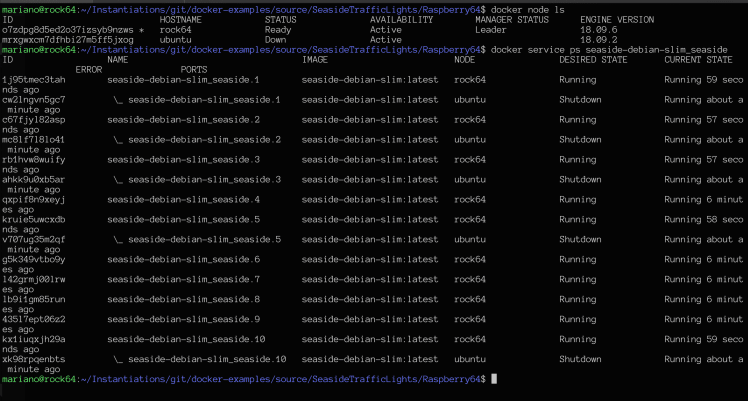 See? ubuntu appears as "down" and the containers that were running on it are automatically re-started on different nodes (here the only possibility was the manager) to satisfy the specified number of replicas (10). Sure, Seaside users would loose their session, but that’s still awesome.