In a previous post we saw an introduction to Docker and Linux containers and one possible usage for Smalltalk. We saw how to create the Dockerfile for a Seaside web application developed and running within VASmalltalk, build a Docker image, and finally run a container with it.

However, one of the conclusions from that post is that with plain docker command we can only run one container at a time and only in that node docker is running. So, in this post I would like to give you an introduction to Docker Swarm, which would allow us to do that. But, to make it easy to understand, in this post we will see a single-node example (but multiple containers).

BTW, thanks a lot to Julian Maestri and Norbert Schlemmer for your help!

Docker can run in “swarm mode”, which basically allows you to create a cluster of docker engines. That way, you can run X number of containers within Y number of nodes. Of course, Docker Swarm comes with a lot of tools to ease the management of the cluster.

docker-compose is another tool which is kind of in the middle between plain docker (only one container running) and Swarm. It allows you to run multiple containers but only within that node, as far as I understand. Because of this, I don’t think is worth spending too much time explaining/learning about that and just move to Swarm.

We will continue with the very same example in the previous post, which is this Traffic Light Seaside demo running on a Raspberry Pi 3.

It’s important to note that for running Swarm you don’t need any extra packages or anything, it just comes with the normal Docker installation.

In the same way the Dockerfile was the most important file for defining a Docker image, the docker-compose.yml is the one for a Swarm. That’s where you define which services you would like in your cluster, how many “instances” of them, and all possible configuration. Below is our example:

How to run the swarm now?

First let’s get the example and build the image:

Then you need to initialize the Swarm. As this will be a single-node cluster, the only thing you need to execute is:

Finally, all you have to do is to start Swarm using my provided startSwarm.sh:

You can see there the docker command to deploy a stack of services using the docker-compose.yml and naming it seaside-debian-slim.

To verify everything is working, you should take a web browser and enter to the host machine on port 80. Example http://marianopi3.local/trafficlight or http://192.168.7.91/trafficlight. That will show the Seaside Traffic Light example we have been seeing so far in the examples.

You can then stop the swarm with stopSwarm.sh which has some magic so that to wait for the network to shutdown correctly… otherwise it will fail once you try to start again:

In the previous post we used the commands container and image to see our results. However, with Swarm you have to use the service commands. Some examples below: 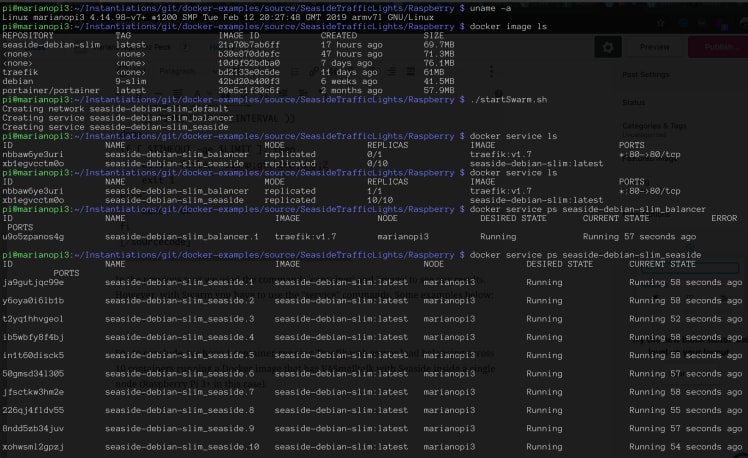 So…to conclude, we have 1 container running Traefik web server load balancing across 10 containers running a Docker image that has VASmalltalk with Seaside inside a single node (Raspberry Pi 3+ in this case).

Another magic thing is the default policy of auto-restart of the containers. Kill one of the containers… by kill -9 or whatever…and see how magically Docker starts a new container to supply the one that went down and satisfy the required replicas (10 in this example).

See seaside containers 2 and 7? I killed them and Docker automatically started them over for me :)

Obviously, the next step is to make the Swarm to work with more than one node :) So here it is a teaser of the next post: 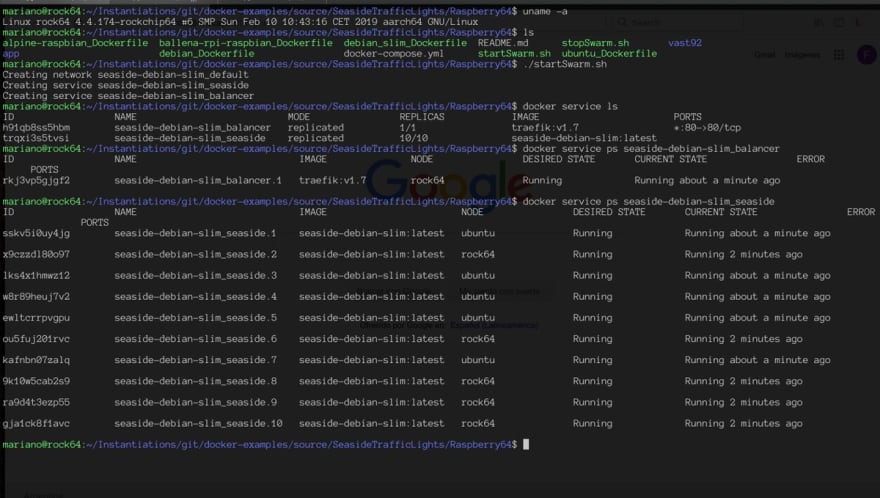