I'm a big fan of the Godot game engine, and lately, since players have been
testing the game more often, I've decided to add some monitoring solution to
get a better view of what's failing players as they try to play.

In this post I'll show how to integrate Sentry's .Net SDK in Godot and use
it to receive usage reports and error monitoring.

Sentry is an open-source error monitoring tool I picked up on a while ago.

I initially started using it because it was open-source and I was quite the
cheapskate, but, it really is an awesome and visually delightful tool.

Aside from collecting error reports and alerting you when the application fails,
it makes it simple to integrate information and events you care about in
those reports. Also, it's fairly easy to integrate and get started
collecting data with, even if you're not that much of a friend to coding.

So, if you want a dashboard filled with reports about how your game crashed,
to who, why and what were they doing leading to the crash,
keep reading.

First, let's grab the required binaries. Installing the Sentry SDK collects a
few other assemblies so I added all of them to one packages.config for
convenience:

Run NuGet to fetch all those into your project's ./packages/ folder.

Tip
If you don't have NuGet yet you can grab it here.
The Windows x86 Commandline version is runnable using mono.

Add references to the Sentry assemblies to your project:

Using Godot we don't really have an initialization section so I created a
dedicated node (here as SentryController) to hold the Sentry initialization
logic. 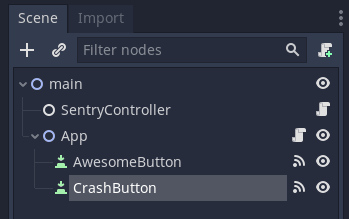 Warning
Pay close attention to the node placement in the scene tree.
The Sentry controller node must come before any application nodes.
Godot invokes their _Ready() methods according to their ordering on the tree,
and any exception thrown before SDK init will not be reported.

After creating an account and a project Sentry will suggest an initialization
clause with your project's Dsn, similar to this:

Tip
After creating a project this page will contain code examples with your project's Dsn in place.

So after adding it to your node it should look somewhat like this.

Now that the client is set up, any unhandled exceptions thrown will get
reported to the sentry API, and appear on your dashboard with a full trace.

For example, lets set a button that throws an exception:

Which after getting pressed will cause an error to appear on your issue
dashboard.

A neat feature of Sentry that I had to cover.

This allows you to log the user's behavior, potentially, leading to the error.
Giving you a better view into what exactly happened before the crash.

After a few clicks on this button, and then, a hit to the ol' crashing button,
we'll get this neat report: 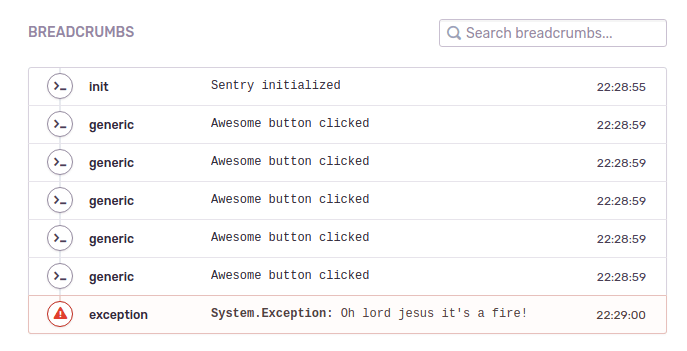 There is a small caveat for people looking to export for Android, read ahead.

Although making all this goodness to work on Android should've been an export
prest away, things turned out to be trickier.

Finding the answer to this little bugger took me a good two days of research,
trial and error, so I'll cut to the chase.

After digging through the .Net Sentry SDK I found out that the System.Web
assembly (required by the net461 variant of the Sentry.dll assembly) is not
a strict requirement, and that on other framework outputs its reference is
omitted.

So, on the last trial, I ended up forking the SDK in an attempt to produce a
Sentry.dll that did not reference System.Web.

You can download a compiled version of it here.

Important: The example project references the compiled fork version so it
appears as such in the .csproj file:

If you're not interested in any of this Android nonsense you can comment /
uncomment whichever line fits your needs.

Other Sentry related stuff you should check out

Nitzan Zada
A software architect with a hands-on attitude and an undying enthusiasm for game development and open source.
Three Months In
#gamedev #mmorpg #godot #go

Once suspended, mastern2k3 will not be able to comment or publish posts until their suspension is removed.

Once unsuspended, mastern2k3 will be able to comment and publish posts again.

Once unpublished, all posts by mastern2k3 will become hidden and only accessible to themselves.

If mastern2k3 is not suspended, they can still re-publish their posts from their dashboard.

Once unpublished, this post will become invisible to the public and only accessible to Nitzan Zada.

Thanks for keeping DEV Community 👩‍💻👨‍💻 safe. Here is what you can do to flag mastern2k3:

Unflagging mastern2k3 will restore default visibility to their posts.