If you're someone who's found themselves knee deep in HTML, you'll know that even this so called "not a programming" language has comments. They're pretty obvious:

That's it. There's no other way to write comments in HTML. Well... 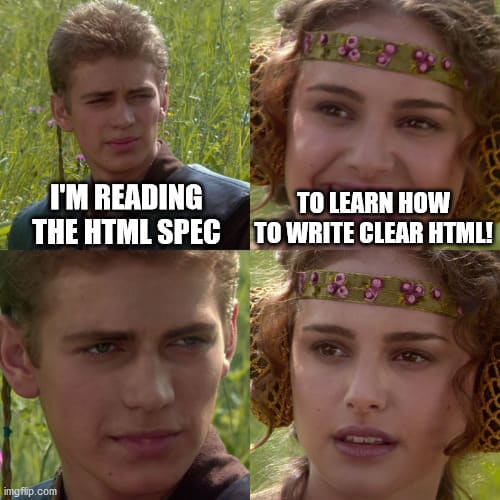 OK, so officially <!-- comment --> is how comments should be written. But the specification will turn your HTML into a comment at the drop of a hat.

Let's have a look at the many and varied ways that parser errors should result in comments!

2. Too much bang for your buck

4. You can question my comments

5. I don't think you should be here

6. It started so well

7. This script is too short

8. Learn the rules of tag

Once suspended, mellen will not be able to comment or publish posts until their suspension is removed.

Once unsuspended, mellen will be able to comment and publish posts again.

Once unpublished, all posts by mellen will become hidden and only accessible to themselves.

If mellen is not suspended, they can still re-publish their posts from their dashboard.

Once unpublished, this post will become invisible to the public and only accessible to Matt Ellen.

Thanks for keeping DEV Community 👩‍💻👨‍💻 safe. Here is what you can do to flag mellen:

Unflagging mellen will restore default visibility to their posts.