My GitHub Action ( TypoCI/spellcheck-action FYI! ) is coming along nicely, now I'm moving onto the hardest part...seeing if people will use it!

It's pretty daunting, I'm fairly certain I've caught most the show stopping bugs, but all the hard work could be for nothing if no one uses it.

Today I had a quick search on GitHub & found I had someone actually using my Action! I didn't know them or anything! It was pretty sweet!

Now I have a user, I thought I should write down some thoughts about how I intend to double, or even triple that number.

Out of the box GitHub doesn't offer anything to tell me the amount of people using my action :/

Initially I was looking at how many Stars my repository had, but then I realised I personally don't Star stuff that often, so it could be a poor metric to track.

For now, I've been searching GitHub for instances of typoci/spellcheck-action which seems to show people who are using it on public repos. I think that's a solid approach to figure out who is using the GitHub Action for now.

The GitHub Marketplace Is Quiet

I submitted my GitHub Action to the GitHub Marketplace, but I'm not expecting a big rush of users from it.

A quick search suggests the terms "spellcheck" and "spelling" shows I already have competition (Who out rank me massively). Plus when I look at the insights from my GitHub Application which has been in the marketplace almost a year, it's suggesting less than 2,000 people visited my listing. 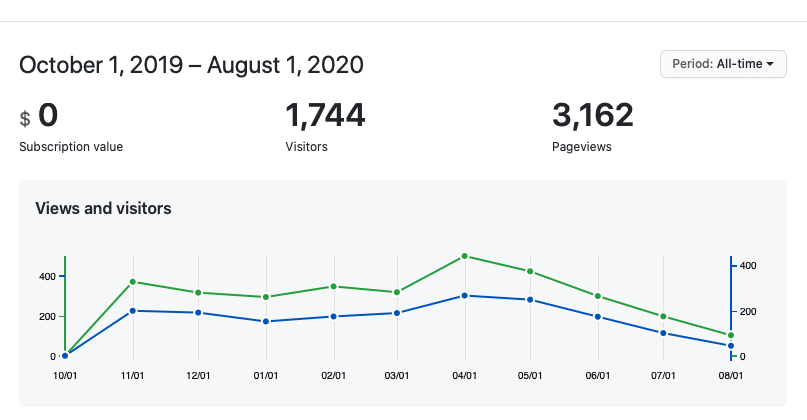 I'm not going to put much time into the Marketplace for now.

One of the main ways I discover useful GitHub Actions by looking at their .github/workflows folder on GitHub. I suspect this is pretty common for others also.

My plan for my next free weekend is to open PRs on all my open source projects to add it. Assuming I don't spot any major problems, I'll use them as examples for other Open Source projects to copy.

Adding a listing to Dev.to

I have a 10 credits on dev.to to use, I was saving for them for when I next need to find a job & want to put my portfolio out there, but I think this could be a fun way to use them.

I think a basic "Here's a GitHub Action to check your spelling" listing should be a-ok.

Making A How To Video

The first time I saw GitHub Actions in the wild I had zero idea on how they worked, so I copied the sample code & once it ran...I had a lovely failure message waiting for me.

I don't want anyone to have that experience. I'm going to try and make a short video on how to install my extension & what to expect. I think that should help :)

Tell Alexa to trigger your deployment

Once suspended, mikerogers0 will not be able to comment or publish posts until their suspension is removed.

Once unsuspended, mikerogers0 will be able to comment and publish posts again.

Once unpublished, all posts by mikerogers0 will become hidden and only accessible to themselves.

If mikerogers0 is not suspended, they can still re-publish their posts from their dashboard.

Once unpublished, this post will become invisible to the public and only accessible to Mike Rogers ✈️.

Thanks for keeping DEV Community 👩‍💻👨‍💻 safe. Here is what you can do to flag mikerogers0:

Unflagging mikerogers0 will restore default visibility to their posts.