At end of my 6th week at Flatiron School's Web Development course, my partner and I had finally completed our Caribbean Stud Poker Rails Project and were ready to deploy it to Heroku. However, we had started our project using a SQLite database instead of using PostgreSQL, which ended up causing a frustrating (but not insurmountable) problem. Heroku, it turns out, is not compatible with SQLite. While we were eventually able to migrate our sqlite3 database over to postgres and deploy to Heroku, it was not immediately clear to me why the database migration was necessary, or even what the differences were between the two Database Management Systems (DBMs)'s. I think this topic will prove even more relevant as we continue developing more complex websites, which is why I wanted to learn more about it!

While this seems like a basic topic - I've noticed the terms "database" and "database management system" used interchangeably, and it's important to get these right.

A database is an organized collection of data, generally stored and accessed electronically from a computer system. For example, the file 'development.sqlite3' in the above image is a database that stores valuable information for our poker app in tables like Users, Cards, Hands, etc.

A database management system (DBMS) is the software that interacts with end users, applications, and the database itself to capture and analyze the data (run queries). In our poker example, we initially used the SQLite DBMS and then migrated to PostgreSQL.

SQL is a domain-specific language designed for managing data held in a relational database management system. This is the language that we use to actually create our tables and store, manipulate and read our poker game data.

Another topic that initially confused me was why there was a need for multiple DBMS's. Wouldn't it be better if there just be one that worked for every use case? Maybe, but it turns out that different types of projects are best suited to different DBMS's based on their storage, speed, and functionality.

According to its website, SQLite is described as "serverless", which is different from most DMBS's. Usually, a program that wants to access a database can communicate with the server to send requests and receive data back. SQLite skips the intermediate server process and requires programs to read and write directly from the saved database file.

When to use SQLite

PostgreSQL labels itself as "The World's Most Advanced Open Source Relational Database", and uses a client-server model requiring a DB server to set up and run over the network, as opposed to SQLite's serverless model. In the client-server architecture, each sessions consists of:

The Postgres server can handle multiple simultaneous connections from different clients, which is a huge strength. For each new connection, the server "forks" a new server process, and then the client and new server process can communicate without intervention by the original postgres process.

When to use PostgreSQL 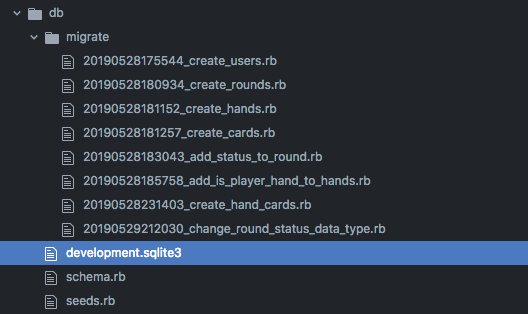 Migrating from SQLite to Postgres

Based on the factors detailed in the section above, it is understandable that a cloud-based platform like Heroku would require a client-server DBMS like Postgres to maintain data consistency and not the disk-backed storage provided by SQLite.

Since Rails has SQLite installed by default and we used an sqlite3 database for our Poker project, we had to migrate our DB to Postgres in order to deploy to Heroku. Here is what we did:

Hopefully this post was able to detail some of the main differences between two widely-used DBMS's (PostgreSQL and SQLite), and will help you select an optimal DBMS for your next project. Feel free to add any questions or comments below!

Apart from the inline links, I used the following references in this post:

Thanks for keeping DEV Community 👩‍💻👨‍💻 safe. Here is what you can do to flag milandhar: