Ahh... Javascript, our beloved language, Its freedom can be either a blessing or a curse.

In this post, we're going to explore 11 different ways (In no specific order) to iterate an array (Not an object) in Javascript.

This kind of loop usage is discouraged and reserved only for debugging sometimes, yet you might encounter it out there the wild being used in production. It iterates over any custom property defined on an object excluding the default javascript ones. It also works to loop through arrays, but if you define anything on the array prototype, then it's totally going to be iterated too.

This is one of the most generous kinds of loops, it's baked in the language specification itself. It's really similar to the for-in loop, but the main difference between both loops is the fact that for-of is used exclusively on collection types (Maps, Sets, Arrays, TypedArrays, NodeLists, etc...). It will avoid object properties and can be used with any object that implements the [Symbol.iterator] Symbol too (See advanced usage).

The main difference to Array.prototype.forEach is the fact that you can use the break keyword to stop the loop and the continue keyword to skip the current iteration.

This is one of the most used and taught arrays in Compute Science. Its syntax is inherited from the C language and it is composed of three parts:

You can use both break and continue keywords for this kind of loop too.

The while loop is the fastest one (for some reason), it's syntax is really simple:

If you want to use it to iterate over an array you're going to need to keep track of an index variable too, making it really similar to a C style loop, but with the downside of leaving an index outside of the scope of the loop.

You can use both break and continue keywords for this kind of loop too.

The do-while loop is really similar to the while loop, but it evaluates the run condition at the end of the execution, resulting in it always running the loop at least one time. This makes you need to handle the scenario of an empty array, since accessing an empty array will result in an error. Its syntax is simple too:

Oh, and you can use both break and continue keywords for this kind of loop too.

ES5 added three major methods to iterate an array to generate a new array. One of those methods is map.

It shouldn't mutate the original array.

It shouldn't mutate the original array.

The reduce function keeps track of a new product and the current element, it also receives a parameter for the initial value of the new product. This can be hard to grasp at the beginning but the more you look at reduce examples, the easier it becomes to you to understand the syntax.

The reduce method gets the following inputs:

The reduce method is typically used to synthesize a whole array into one value, like performing a sum for example.

The join method has something in common with the last method we introduced (reduce): It does generate a single output from an array, a string to be more specific, and it can only run on string-based arrays.

It has an only input: A separator string to be used.

This is one of the newest features introduced to javascript, it allows us to place an await in our for of loops, allowing them to iterate on promises and asynchronous values (See async generator functions).

You can use for await of along with async generator functions to specify loops that will wait for the current promise being iterated to be completed, or you can use it to await on an array of promises (You should probably use Promise.all for this though). 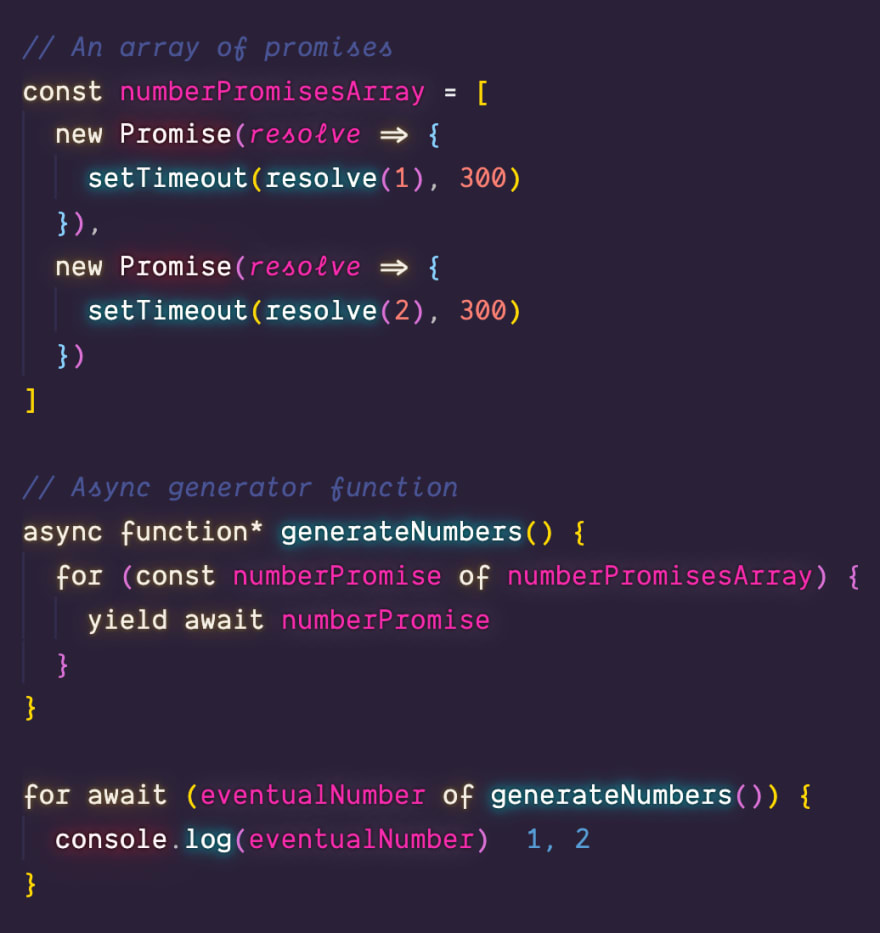 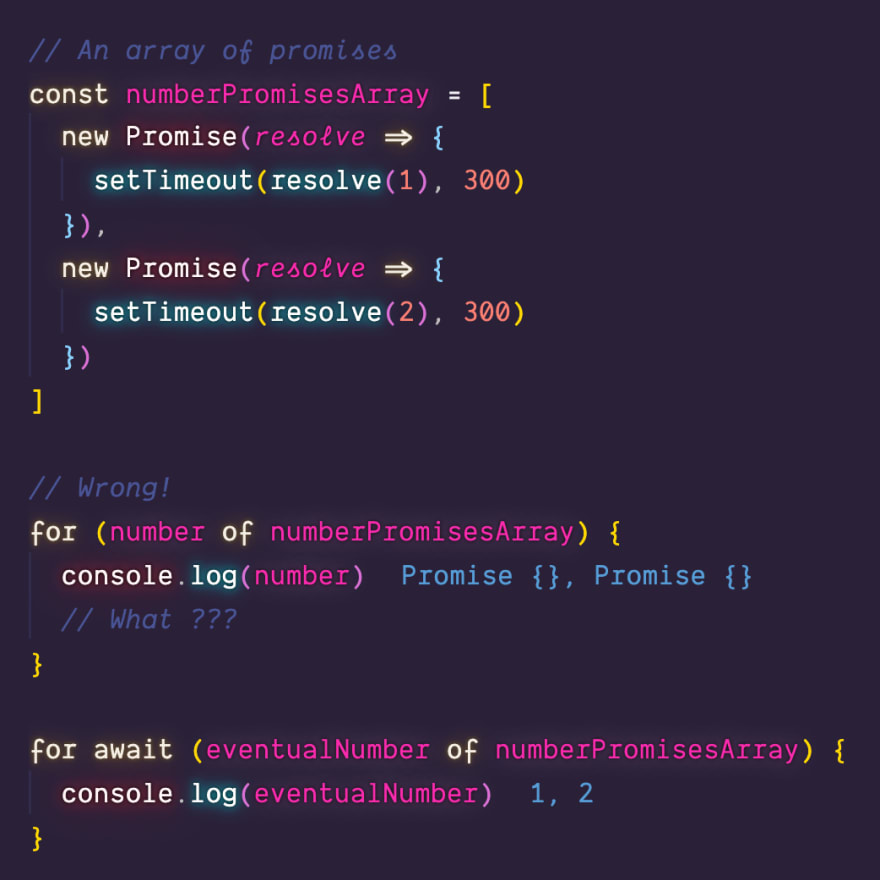 It iterates through the main array to find nested arrays and brings the values contained on any nested array to the top level.

You can specify how deep in the array structure you want to go to bring the array values to the top level. 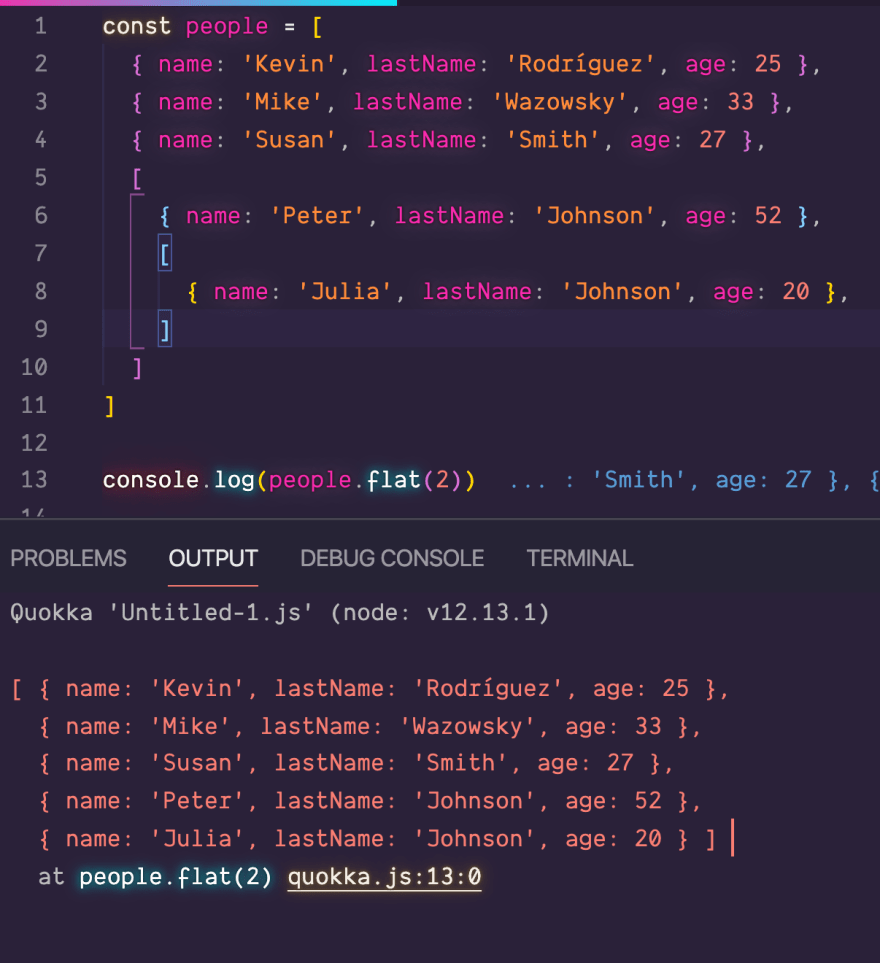 It's exactly the same as map followed by a flat. You can use this one to flatten the product of a map that produces nested arrays.

(Thanks to Pablo Obando for these suggestions) 😄

You can use recursion to iterate an array, thanks @nombrekeff !

Recursion in functional terms is when a function is able to call itself, looping trough the code. This has some advantages:

1- You can customize your loop as much as you want.
2- Functional approach.
3- Really helpful when you're dealing with other kind of structures like trees or circle lists.

But be careful, javascript does have a maximum call stack size, this means on every iteration a call is registered in the call stack, and if there are way too many calls, then you'll overflow the call stack, causing an exception, also, recursive calls are slower too because of this behavior.

You can even create a mix of a C Style loop and a forEach loop!

Let's go ahead and define a recursive function to replicate the functionality of Array.prototype.forEach: 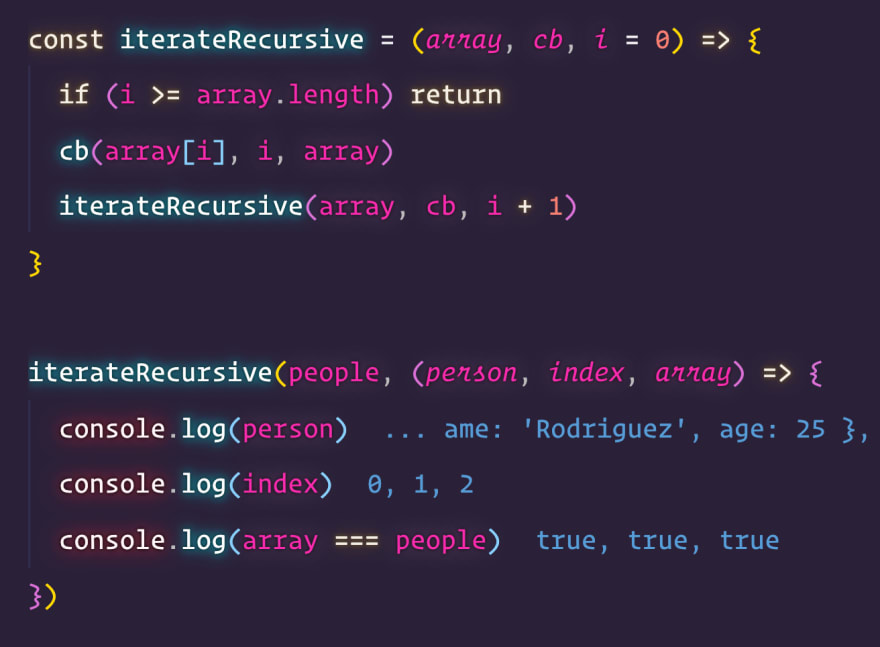 Once suspended, misterkevin_js will not be able to comment or publish posts until their suspension is removed.

Once unsuspended, misterkevin_js will be able to comment and publish posts again.

Once unpublished, all posts by misterkevin_js will become hidden and only accessible to themselves.

If misterkevin_js is not suspended, they can still re-publish their posts from their dashboard.