In March last year, I released a web tool for building rsync commands via a GUI. I've now further developed it into it's own Mac app which is named Rsyncinator. 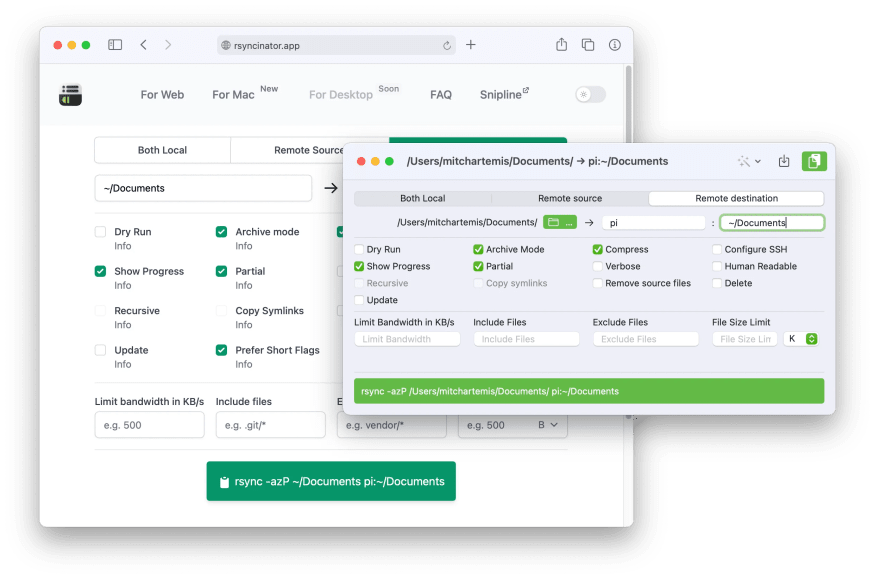 The Mac app adds some niceties, such as being able to store and load commonly used rsync commands and using a convenient file picker for local paths. It also comes with all the goodness of a native Mac app: It's fast, small, and has multi window/tab support.

After I finished building it, I decided it needed a website of its own. So I've rewritten the old Rsync for Snipline website from the ground up. You can still use the web tool, although it's slightly different now (More inline with the Mac app).

You can see the new website here and if you like the look if it, you can get the Mac app on the App Store.

Dealing with “We are used to working like that, so don`t touch it”-kind of projects

Once suspended, mitchartemis will not be able to comment or publish posts until their suspension is removed.

Once unsuspended, mitchartemis will be able to comment and publish posts again.

Once unpublished, all posts by mitchartemis will become hidden and only accessible to themselves.

If mitchartemis is not suspended, they can still re-publish their posts from their dashboard.

Once unpublished, this post will become invisible to the public and only accessible to Mitch Stanley.

Thanks for keeping DEV Community 👩‍💻👨‍💻 safe. Here is what you can do to flag mitchartemis:

Unflagging mitchartemis will restore default visibility to their posts.