Doesn't matter what kind of service you're creating. If you're building it on AWS, there's
one thing you can't run away from: IAM.

For applications running in the cloud, IAM roles are the recommended way to grant the necessary permissions your service requires. However, when the topic is accessing your AWS account from localhost using the AWS CLI, most users still rely on long-term credentials.

While long-term credentials are convenient, they can put you in trouble if they get leaked. With enough permissions, anyone in possession of your keys can start services at your expense, steal sensitive data or even put your service down.

In this post, I'll show you how to replace your long-term credentials by temporary ones, so you can enhance the security of your local setup and reduce the blast radius in case of a leak.

By the end of this post, you will have a fully configured setup to acquire temporary credentials whenever needed and renew them when expired.

This article will focus on environments with few accounts (like personal accounts and startups). For large environments, AWS Organizations and AWS SSO gives you a much more scalable and maintainable way to set up access via federation.

This tutorial will assume you have valid credentials stored in the named profile default and that these credentials have enough permissions to perform IAM related operations. IAMFullAccess is a good candidate while following the tutorial (don't worry, you can remove this policy by the end of the tutorial).

In case you don't have the credentials, follow the official docs to create them.

MFA (multi factor authentication) provides a second layer of authentication to your setup. In this tutorial, I'll use a virtual MFA device, which is basically an app running on my personal smartphone that generates OTPs (one-time password). However, this tutorial should work just fine with any MFA device supported by AWS.

To set up your virtual MFA device and link to your account, follow the official documentation here.

Additionally, to make the authentication process more secure, we will make sure the role can only be assumed if MFA authentication is presented during the operation.

So, let's start by creating the IAM role with the permissions for the temporary credentials. For this role, we need to define the assume role policy:

The assume role policy above grants permission to your user to assume roles, but with the condition that MFA authentication is presented. It means that, if you try to assume a role using your long-term credentials directly (without MFA), it will be rejected. This grants an additional layer of security, since, if your long-term credentials get leaked, the attacker won't have the power to assume the role unless he/she gets access to your MFA device.

Next, let's allow your user to call assume-role action on the PowerUserRole role created above.

From now on, your user has permissions to assume the PowerUserRole role in your AWS account, but MFA must be presented during the assume-role operation.

Let's set up our named profile (mfa). This profile will instruct AWS CLI to assume the role PowerUserRole whenever the profile is used. It will also inform the MFA device used for the multi-factor authentication. Additionally, we will inform the session duration desired for the temporary credentials.

Now, you just need to use the profile as usual. Whenever the temporary credentials expires, AWS CLI will ask you for a new OTP and refresh your credentials. Easy and convenient 😊

For assumed role credentials, AWS CLI treats any session with expiration within 15 min as expired. So, as an example, if your session is still valid for 10 minutes, using it for issuing a new CLI command will make AWS CLI request new ones (and ask you for a new OTP).

More information can be found here

You can use the very same setup to assume a role in the console instead of using your IAM user's permissions.

To do so, log in on AWS console using your regular IAM user's credentials and go to Switch Roles in the dropdown menu in the upper-right part of the screen.

Now, you just need to fill in the information as follows:

Assuming a role on AWS console

By clicking on Switch Role you will be redirected back to console, but now your permissions are defined by the assumed role. 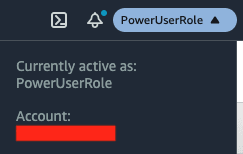 In case you wanna go back to your IAM user, just go to the dropdown menu and click on Back to [your user name].

Once a role is assumed the first time, it remains in the dropdown assume-role history. So, switching to the role next time is one click away.

A full documentation about how to assume role on console can be found here.

IAM roles are created by default with the maximum session duration set to one hour. It means that, if you set duration-seconds parameter on your named profile for anything longer than one hour, assume-role will fail. If you want to allow longer sessions, you can append the parameter max-session-duration to the create-role command.

Maximum session duration is provided in seconds and accepts any value between 1 hour and 12 hours.

Now that you have an IAM role granting you permissions via temporary credentials, you can remove any permissions assigned directly to your IAM user (except the AllowAssumeRolePolicy policy). This will guarantee that your long-term credentials can be used only to request the temporary ones. If leaked, attackers won't have much power unless they get access to your MFA device too.

However, our role has the PowerUserAccess policy attached, which means it can't change anything IAM related. How do you manage to adjust your setup in the future?

The recommended way is setting up an admin IAM user, which Administrator access. This user will be used solely for administrative tasks (such as adjusting your IAM roles and permissions) and shouldn't be used for your day-to-day operations.

Instructions on how to create a new admin user can be found here.

Finally, if you decide to use your admin user credentials via CLI (and, thus, need to generate long-term credentials), it might be a good idea to deactivate your credentials when not in use. This will require you to log in to the console in order to re-activate the credentials, but guarantee that your credentials are only valid while you're actually using them.

In this article, we saw how easy is to retire your long-term AWS keys and leverage temporary credentials.

Temporary credentials enhance the security of your account. First, because in a situation of credentials leakage, the attacker has a limited amount of time to do any damage. Second, because MFA adds an extra layer of security, making it harder for attackers to hijack your account.

Also, IAM roles give you more control about what permissions are in effect for a specific session. By creating fine-grained IAM roles, you can create dedicated named profiles in your localhost with the same setup presented in this article and use them according to your need. This approach provides a more secure setup and complies with the AWS concept of least privilege.

How to mock AWS SDK with Jest

How to passed the AWS Cloud Practitioner Exam in 3 Weeks

Once suspended, mklein will not be able to comment or publish posts until their suspension is removed.

Once unsuspended, mklein will be able to comment and publish posts again.

Once unpublished, all posts by mklein will become hidden and only accessible to themselves.

If mklein is not suspended, they can still re-publish their posts from their dashboard.

Once unpublished, this post will become invisible to the public and only accessible to Mauricio Klein.

Thanks for keeping DEV Community safe. Here is what you can do to flag mklein:

Unflagging mklein will restore default visibility to their posts.