Ansible is an IT automation tool but I am going to use it here as a deployment tools. Ansible manages machines in an agent-less manner, so I only need to install it on my managing machine.

I have provisioned 2 Ubuntu VMs on Azure. The managing VM is called AnsibleLocal and the other one is called node01.

Installing Ansible on the AnsibleLocal machine

From Azure cloud shell ssh to the local machine and then run following commands:

If you have different OS find the installation instruction from here

Per Microsoft recommendation we are going to use snap module. Then ensure the version of ansible is greater than 2.8.

again to see the details of this module you can try:

We need to tell ansible the machine(s) which are going to be managed. Edit the ansible hosts file.

Note: the hosts group name (MyGroupA) and the remote_user is what we have defined in /etc/ansible/hosts file.

In this example we are installing the dotnetsdk but in real cases we might only need dotnet runtime so the snap properties would be like:

In the most of ansible modules the property state accept following choices:

Before running the playbook you can do a syntax check on it:

Finally, you can run our playbook:

If we run the playbook again, it would detect the DotNetCore is already installed so the changed would be 0 but the ok would be still 2.
The output this time would be like

Now, we are going to ssh to the node01 VM and do a test. Again, as explained by Microsoft:

When .NET Core is installed using the Snap package, the default .NET Core command is dotnet-sdk.dotnet, as opposed to just dotnet

Thus we would test as: 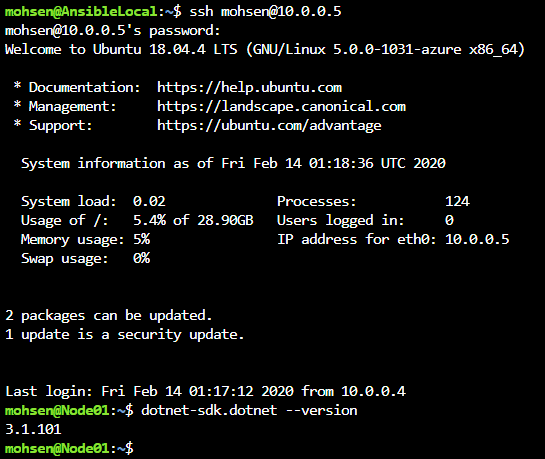 Oh my bash in Ubuntu

How to install grpc php on ubuntu?

Once suspended, mkokabi will not be able to comment or publish posts until their suspension is removed.

Once unsuspended, mkokabi will be able to comment and publish posts again.

Once unpublished, all posts by mkokabi will become hidden and only accessible to themselves.

If mkokabi is not suspended, they can still re-publish their posts from their dashboard.

Once unpublished, this post will become invisible to the public and only accessible to Mohsen Kokabi.

Thanks for keeping DEV Community 👩‍💻👨‍💻 safe. Here is what you can do to flag mkokabi:

Unflagging mkokabi will restore default visibility to their posts.