Just over a month ago, Stack Overflow released their annual Developer Survey.

Unsurprisingly, JavaScript is still the most commonly used programming language, making it eight years in a row.

And while my journey with JS is only beginning, let's say I wanted to learn another language. I could obviously just pick the second or third most popular language in the list, but popularity doesn't necessarily mean happiness, right?

Luckily, Stack Overflow's survey includes a Most Loved, Dreaded, and Wanted section which provides some interesting insights on which languages developers enjoy the most, enjoy the least, and are seeking to learn.

Today, we'll focus on the the second Most Loved language: TypeScript.

TypeScript and the Problem it Solves: Dynamic to Static

Developed by Microsoft and made public in 2012, TypeScript is considered a superset of JavaScript, which essentially means it is a powerful extension of JS.

What's the difference between dynamic and static typing? Let's jump into an example:

In the above function, we create a function called sayName that just prints a welcome message to the console. But sayName is just a variable declared with var, so we can just change the value.

And while we obviously would expect an error like this:

Why can't we at least see our first message, then see the Type Error? Because JavaScript is dynamically typed.

When we run a program, which consists of lines of code, that code is prepared to execute on whatever device or environment you've prepared, or what we call "compiled".

During this compiling phase or "compile time", statically typed languages like C# or C++ check the types and look for Type Errors before even running the program. If there is an error, the program will not run or even get to "runtime".

Conversely, dynamically typed languages like JavaScript go to runtime first then check for Type Errors. This can be particularly dangerous as programs expand in size, whether it be lines of code, files the code is distributed across, or both.

At least with our simple error above, we can easily re-trace our steps back to the re-defining of sayName a few lines above. In bigger applications, debugging is never that easy.

Thus, TypeScript was developed with the goal of bringing this "type check" to JavaScript before runtime to make our lives easier. So let's utilize TypeScript in a very simple way.

Let's borrow some code I wrote for my blog about destructuring, but with a few modifications. Here's what it looks like before we install and utilize TypeScript:

This prints the following message the console:

You'll notice that even through 2 is a number inside of our object, the template literals convert it to a string.

To re-factor this function using TypeScript, we have to do a few things. First, we need to install two dependencies: TypeScript and ts-node, which allows us to test our files directly in the terminal.

Next, we need to create a TypeScript file using the .ts extension and then start writing our code. Here's our slamDunk.ts file in its' entirety. 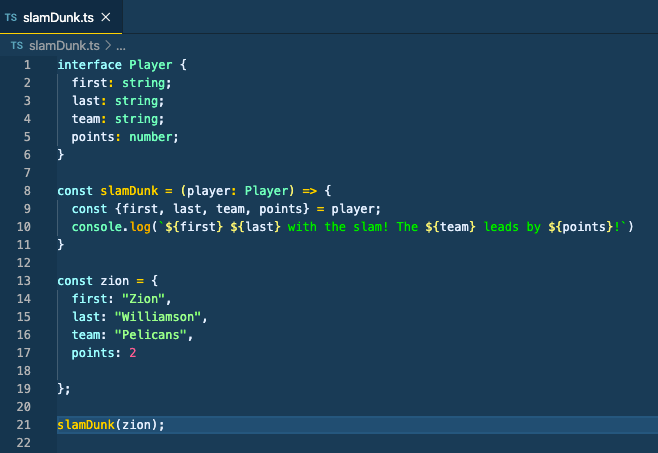 Next, let's break down the key differences in this file from our plain JavaScript snippet above.

First, you'll notice that instead of going straight to our function, we have what is called an interface. An interface is a way for developers to explicitly declare what an object (in this case, a Player object) should contain, both for the keys, but also the types those values should be at the keys.

In the slamDunk function, we still have a player parameter, but again, we're explicitly stating that whatever inputs we take in must match the Player interface.

If the input matches our interface, we'll destructure it inside the function and then print our message.

You'll notice that our zion variable remains unchanged. So if we run this command in the terminal:

We'll get this message:

This is all well and good, but this doesn't really display the power of TypeScript, so let's make some changes to our zion variable.

Our linter is already making noise, but let's try to run this in our terminal, just for kicks.

What this error tells us is that the key "points" is a string and not number, so our code can't be compiled as designed and thus won't be executed.

In our JavaScript example, this would still work. In fact, it might be preferred so we don't have to rely on the template literal changing the number to a string.

But with TypeScript, if it doesn't match the pre-determined type, it doesn't execute.

What if we tried to call slamDunk with an object that was missing one of our keys?

We'd still get an error because "points" is actually missing this time.

As we can see, while TypeScript is being compiled, it looks at all the variables and checks if it matches our rules. If it doesn't run. And better yet, the "errors" we get give us a specific reason the code can't compile: it doesn't follow our rules.

JavaScript is an incredible language and isn't going anywhere, but you probably didn't need me to tell you that. It's flexible, accommodating, and easy to learn, but like any system in technology, it comes with inherent trade-offs. Too much flexibility can lead to errors down the line, so utilizing TypeScript is a great way to control for any bugs that could potentially pop up.

And since TypeScript is just an extension of JavaScript, it's no different than pulling up the bumpers at the bowling alley. You can shoot down the middle all you want and one misstep won't send you in the gutter.

Once suspended, mlittle17 will not be able to comment or publish posts until their suspension is removed.

Once unsuspended, mlittle17 will be able to comment and publish posts again.

Once unpublished, all posts by mlittle17 will become hidden and only accessible to themselves.

If mlittle17 is not suspended, they can still re-publish their posts from their dashboard.

Once unpublished, this post will become invisible to the public and only accessible to Mac Little.