My good friend and coding partner in crime, Jordan, is building a Pokedex app using React. She's a CSS and design whiz! Check her out! Anyway, when we pair she does the fancy artsy magic and I tackle the APIs. So when she asked me to make a rails API for her Pokedex blog project I was more than happy to oblige!

I talked it over with her to find out exactly what she wanted. She wants users to be able to signup, login, and add pokemon to their decks with persistence. So my thought is to have a User model, a Pokemon Model, a joins table called Pokedex that will have a has-many-through relationship between a User and a Pokemon. Using draw.io I made up the relationships I'm envisioning to get her approval: 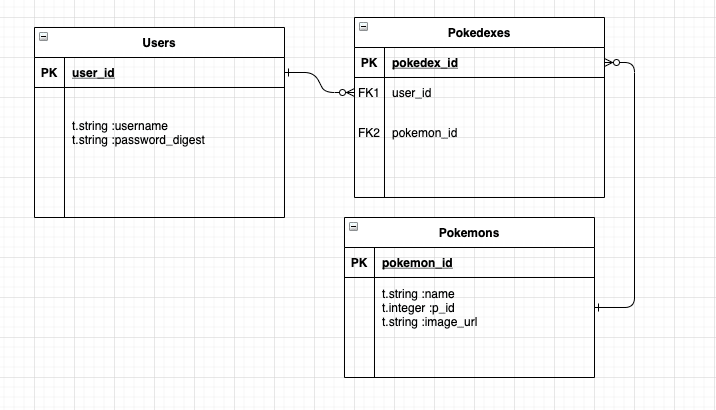 For my user authentication, I will use sessions and cookies. There are lots of opinions on whether this is the best choice versus using JSON web tokens, but I find sessions and cookies easier to navigate and since it's an app that I don't anticipate having huge amounts of users and it's strictly for fun, I'm not too concerned about CSRF attacks. That being said, this is why you don't reuse passwords people! Even though I will be using Bcrypt to hash the passwords and I won't know what you entered, it's always a good idea to use different passwords because you never know when an app isn't using good authentication practices. Ok, I'm going to get off my soapbox, and time to start building!

Firstly I wanted to make sure I was on the same page as Jordan, so I navigated to our collab channel on Github and cloned a copy of her personal-pokedex project. 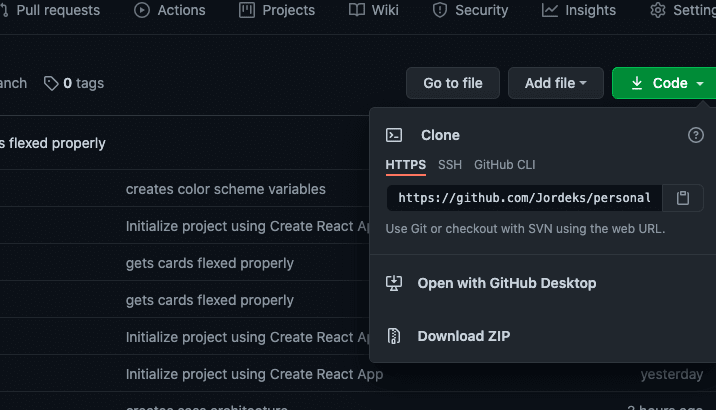 In my own terminal I made a folder to hold both the back and front end projects called pokedex and ran:

This allowed me to see what her front end is looking like right now and I can see how she has structured her components. 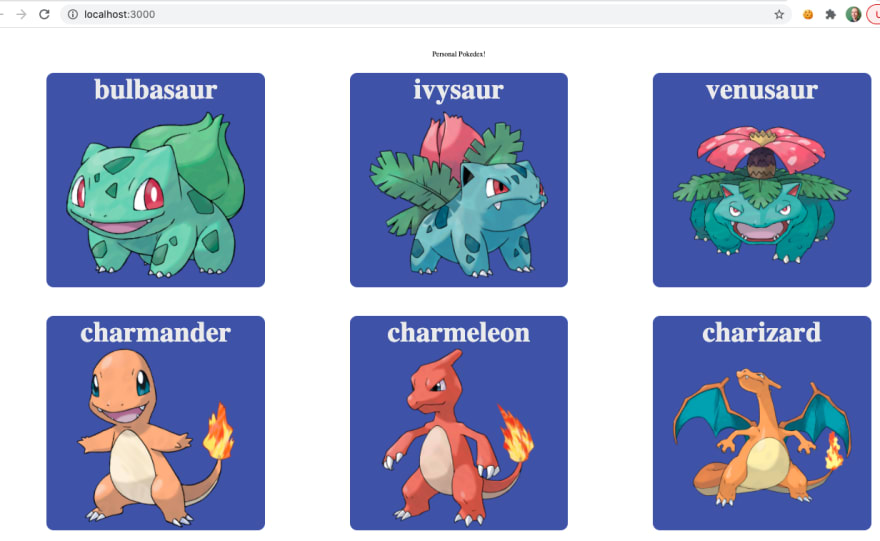 All right! Time to start on the API!

Once Rails had completed its process of generating the files, I made a new git repository in Jordeks: 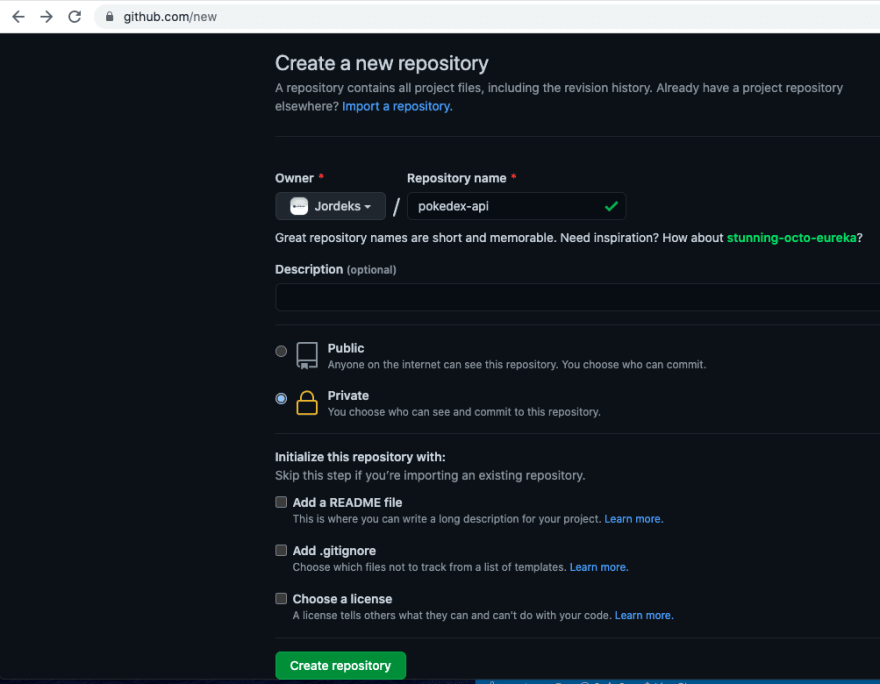 Then made my initial commit and it's time to rumble!

Let's add some gems that we'll need; go ahead and un-comment out

in the Gemfile. We'll need bycrypt to set up password protection for users and rack-cors so the front end can make requests to the backend. Run

so they are added to the Gemfile.lock. While we are thinking about cors, let's go to config/initializers/cors.rb and comment in:

For your origins, you can use a '*' which is the wildcard and will allow for any URL to send requests, or you can specify which local ports you might use while in development and also later add the deployed URL.

I also know I will want to use a serializer to send the data as JSON so let's add the rails active model serializer:

After talking over what Jordan wants, I came up with this plan for making the models and tables:

Using $ rails g resource, I can generate migrations, models, controllers, serializers, and routes using the following commands (for Pokedex, I don't anticipate needing a list of all the joins, so I'm just going to generate a model for it):

If the data type is a string, you don’t need to specify their type following the column name. Adding user:belongs_to specifies the relationship between your two tables and sets up a column for user_id in your pokedexes table. Additionally, we use column name password_digest to avoid directly storing passwords as strings.

Once rails is done generating, I like to go through each file that is created to make sure everything worked as expected, which means for the resources checking the routes.rb, controller, model, serializer, and the migration. I'm looking for spelling mistakes and typos in particular in the migration table before I migrate it.

Top Trick: By installing the active model serializer before I generated the resources, rails knows to automatically build the serializer for anything that has a controller. That way I don't have to go back later and manually generate the serializers. However, if you don't do this, this blog includes some great step by steps for generating serializers.

Also, when looking at the serializers that were generated, I notice that the user_serializer includes the password_digest. Under no circumstance should that be sent to the frontend where malicious users might try to access it. So let's take that out now.

Next, run $ rails db:create to create the back end and $ rails db:migrate to migrate your tables.

At this point I like to check that I can run

and see that it runs: 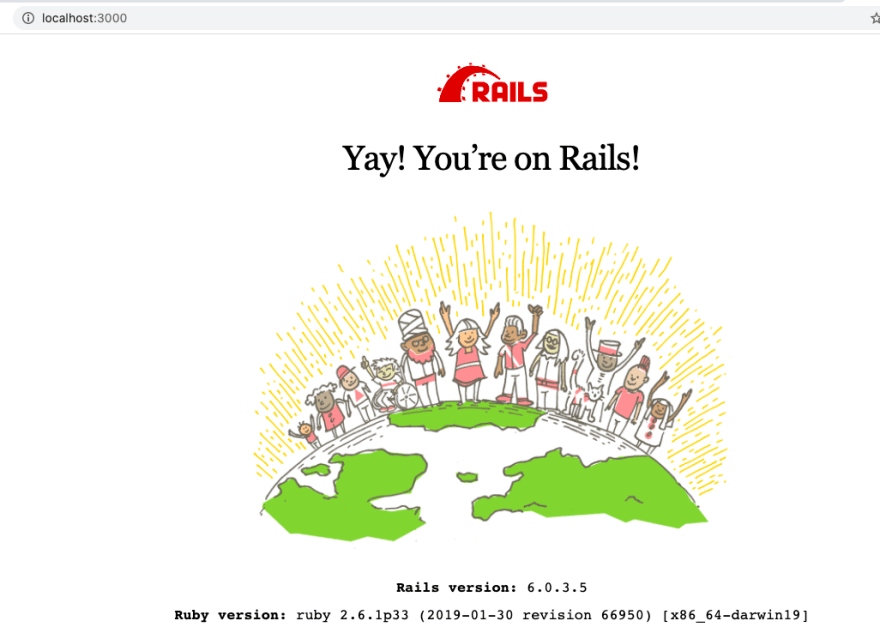 Woot! Welcome to rails! Now if I navigate to http://localhost:3000/pokemons, I get the very helpful rails error: The action 'index' could not be found for PokemonsController. Which is exactly what I'm expecting at this point.

Ok, let's go back to the models and finish adding the relationships. Pokedex already has both belongs_to relationships because we generated it with that reference.

And for the User model, I'm going to add the has_secure_password macro so that we can use Bcrypt to protect their password.

My next step is always to test out my relationships in the rails console to make sure it behaves the way I want it to. And guess what! By doing this I found a typo in where I placed the colon on one of my has_manys, so it is worth the time to do this! So after testing that I can make a user, a pokemon, and associate the two to create a pokedex, we will want to create a seeds file. I like taking time to do this as it helps set up a game plan for how the controllers will work later.

Top Trick! You can use the commands:

All in one line to drop the database so any users you made in the console that you don't want to conflict with your seeds are removed. Then it will recreate the database, migrate and seed it all in one go.

Next, let's test that we can build an endpoint, I doubt that Jordan will ever want to return all the pokemon in the database, but it's a good place to check that we are getting the data we expect as json through our serializer. 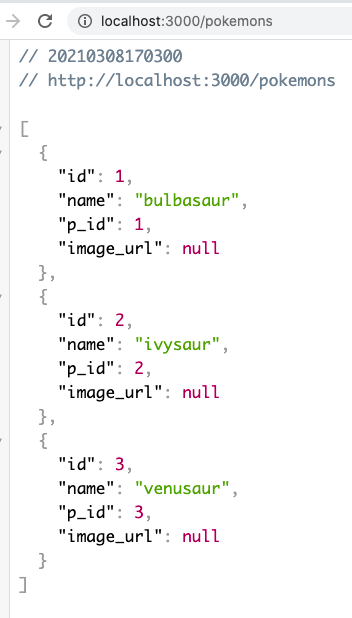 Yes! We got back an array of objects with the name, id, and an empty URL for the image. After talking with Jordan, turns out she won't ever need to get the URL from the backend, so for now, we can take that out of the serializer. 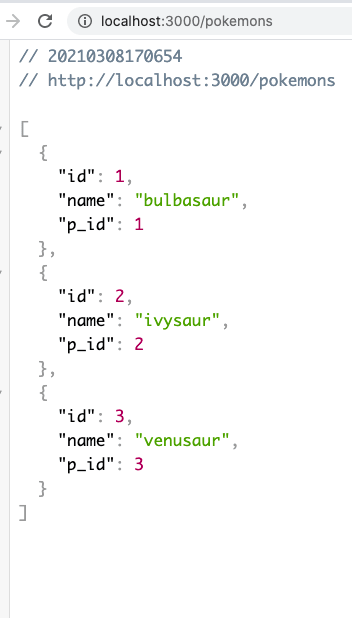 Sweet. I am happy with this.

Ok, before I get too far ahead of myself, I want to move the pokemon and user controllers into a V1 folder inside an API folder inside the controllers' folder. This is a good habit to get into so that one can easily create new versions on the API that the front end can use and the only thing the front end has to change is which version it sends requests to. So we need to create the two folders, namespace the two controllers, and update the routes.

Now I can navigate to http://localhost:3000/api/v1/pokemons and see: 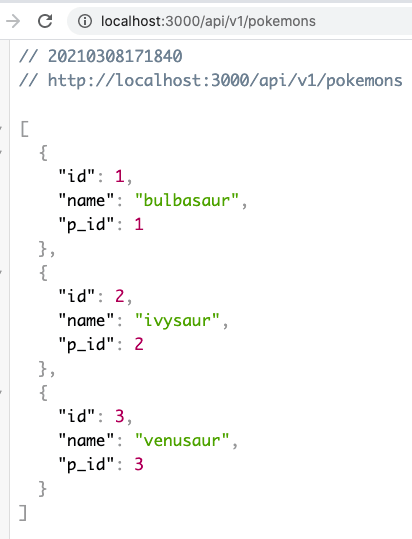 This is the route that the frontend will send requests to for all the pokemon (if it ever wants it).

Next let's take care of some validations. We don't want any entries that might mess up with our database. The user absolutely must have a username, and it must be unique since that is how the will be identified upon login.

And Pokemon are must also have names and p_ids that are present and unique:

Now if I try to create a new Pokemon without the p_id, I get an error in console:

and a successful insertion if it is saved to the database! I can also see the validations at work if I try to make a Pokemon that already exists:

By using $ p.errors.any? I can see if there was an error and the command $ p.errors.messages returns to me a list of validation errors.

If you are with me this far, give yourselves a pat on the back! We have successfully made our database, models, controllers, serializers, routes, validations, and done some manual testing in console to make sure our relationships are working. In the next rendition, we will set up our user authentication system with sessions and cookies.

You can go through the code at the Jordeks github repository.

How to trim Whitespaces in Ruby Strings

Meks (they/them)
Meks is a graduate of Flatiron’s part-time Full-Stack Engineer program. They are a software engineer primarily working in the PETAL stack. Their background is in Microbiology and Spanish.
Building a Pokedex with Rails Part 2 - Authentication
#ruby #rails
Basic Ruby Calculator with RSpec
#ruby #rspec
How to Setup a Rails API and React.js Client
#rails #react #github

Once suspended, mmcclure11 will not be able to comment or publish posts until their suspension is removed.

Once unsuspended, mmcclure11 will be able to comment and publish posts again.

Once unpublished, all posts by mmcclure11 will become hidden and only accessible to themselves.

If mmcclure11 is not suspended, they can still re-publish their posts from their dashboard.

Once unpublished, this post will become invisible to the public and only accessible to Meks (they/them).

Thanks for keeping DEV Community 👩‍💻👨‍💻 safe. Here is what you can do to flag mmcclure11:

Unflagging mmcclure11 will restore default visibility to their posts.