Hello guys! I am Clark! In this article I am going to share how to package front-end projects into Docker images with webpack.

Maybe someone thinks this is useless for front-end developer, but I think for me, developing a project in front-end is more complicated than before, and also include part of setting environment.

For example, if I want to run a project, I need to install node or I should install deno if this project using deno? I can't just run the project? and make the project work? and perhaps the project also need rely on database?

Just choose docker and I think this is common way now.

But in this article I wouldn't talk part of back-end projects, if you guys want to know, please comment below let me know :)

Okay, the first step still is install, please refers docker's document, I think it is clearest.

If you want to build a docker image, you should throw Dockerfile. we will write something that about how do you want to execute the project and environment of execution of the project. Below is a basic context of Dockerfile:

So, I will explain some point of above Dockerfile:

After installed libraries, I copy all files to WORKDIR and run a command npm run build for building the project.

Now is the great time, I want to talk about something you should pay attention if you using webpack-dev-server to run server, that is you need to add --host 0.0.0.0 to commands behind webpack-dev-server, I find it from this issue, but I still have no idea for the reason, if you know we can chat about it in the below comment! 😃

After we finished above things, we can run the command which building a image:

We can type docker build to build a image, -t meaning is tag name, you can add tag name for your images, the format is image name:tag name, last is your path of project which you want to defined the project root path.

If have no display any problem, we type docker images in terminal, we can find out our image.

Next, please type below commands for run images:

We can use docker run imageID format execute a image, and a same time, a container will started, our image will run in the container.

After running your images, we can type above commands to see running container with image.

And we can open browser, enter localhost:8080 into url, the project is work 🎊: 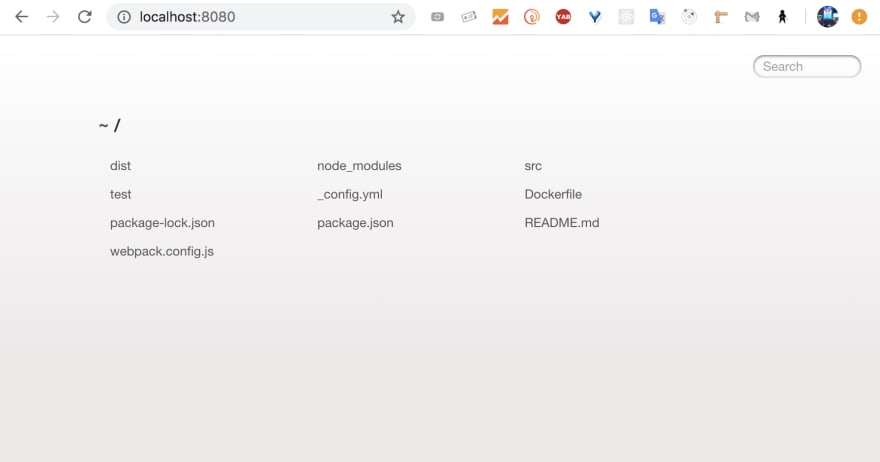 If you want to stop or delete container and image you can refers below commands:

I hope this post can help you, if you have any questions or suggestion please let me know by below comment!

thanks for you read! 😃

Clark
I love share knowledge and writing blog posts(about frontend skill), like coding enjoy life.
What was your win this week?
#discuss #weeklyretro
Who or what are you grateful for in tech?
#discuss
Meme... Tuesday? 🤔
#jokes #discuss #watercooler

Once suspended, ms314006 will not be able to comment or publish posts until their suspension is removed.

Once unsuspended, ms314006 will be able to comment and publish posts again.

Once unpublished, all posts by ms314006 will become hidden and only accessible to themselves.

If ms314006 is not suspended, they can still re-publish their posts from their dashboard.

Once unpublished, this post will become invisible to the public and only accessible to Clark.

Unflagging ms314006 will restore default visibility to their posts.