Hustle
To have the courage, confidence, self belief, and self-determination to go out there and work it out until you find the opportunities you want in life.
Urban Dictionary

It all started with a post on Twitter where I announced that I would try and mimic Justin Samuels' schedule for "hustling".

I’m toying around with the idea of sleeping from 11-5 like @ThugDebugger. If I do that Sunday-Thursday and sleep in on the weekends, I should be able to still put of muscle after the gym 🧐

Justin (@thugdebugger) is known online for his drive and in pushing forward diversity in the tech industry. His latest step towards that is a conference in Atlanta, Georgia, which you should definitely check out.

However, if my plan was to see if this shift in lifestyle was right for me, then I would have to set my sights a bit smaller. So I picked a central theme that I would focus on and do whatever I could for 30 days to work towards that theme.

So for 30 days, I would focus on ENGAGEMENT as my hustle theme and began by identifying what that meant for me.

So before immersing myself in this lifestyle change, I spent a week research-gathering so I could hit the ground running from the start.

I didn't have much to go off of because the space was new to me, so I clung to Justin's tweets for advice. In all reality, all I knew before getting into this was sleep was from 11-5 and work was everything else. Deviating from that central idea appeared to be a no-no.

After a week of searching, I came up with the following guidelines:

Once I was ready, I checked in!
Liquid error: internal

I knew this week was going to be rough, so the first thing I did was setup a schedule that made sense at the time. Emphasis on at the time 😅 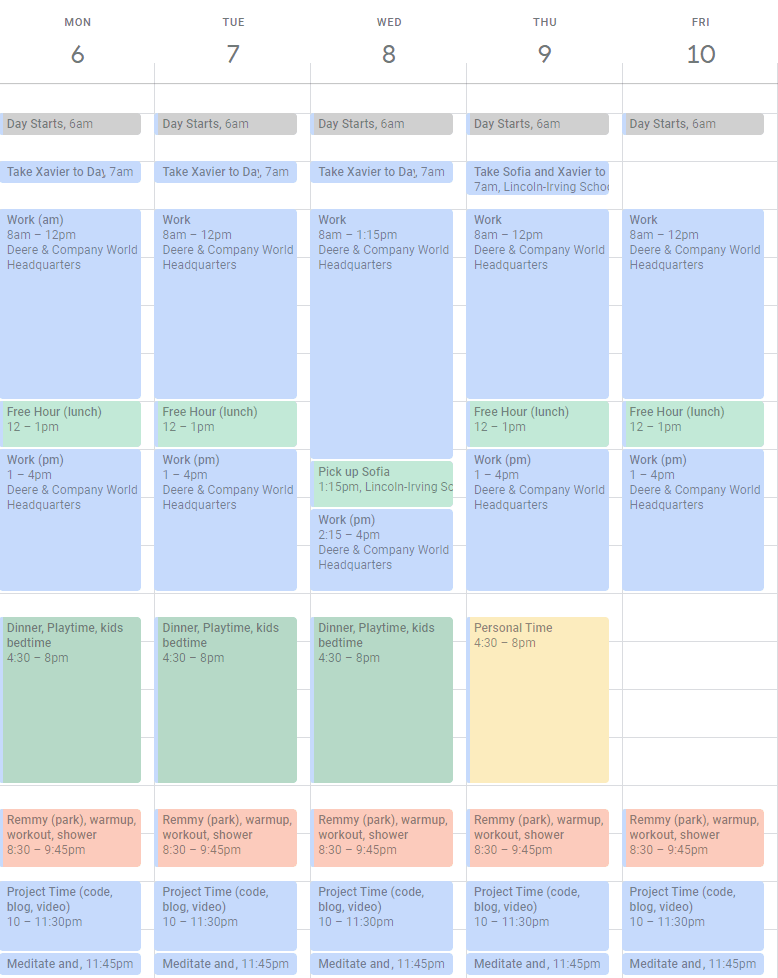 I had to see what time I actually had available to me, so I included everything from taking the dog to the park, to meditating. Also note that I chose to sleep at midnight and wake up at 6 because I tend to be more of a night-owl.

Spending an hour to think about my time over the course of a week is something I've never done before. It was interesting, and at times depressing, to see how much free time I actually have and when.

For example, 4:30-8:00 seems like quality time, but that's broken down further to picking up the kids, making dinner, and bath time, which left about an hour of actual play time.

The first three notes I have are as follows: 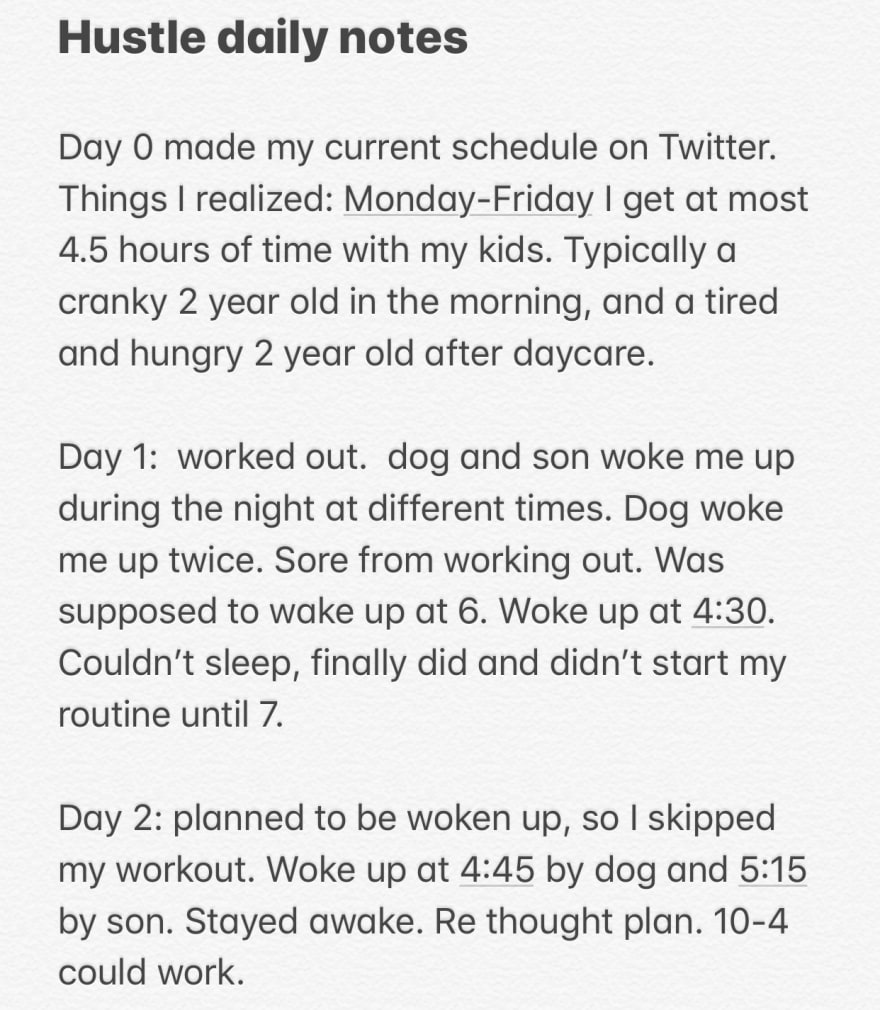 I was feeling pretty lost at this point. After only 3 days, I was tired, cranky, depressed, and defeated. I knew there would be some time for adjustment. Though I couldn't see how a 6 hour sleeping schedule was beneficial or helping me with my theme of engagement.

As luck would have it, there was a ray of hope at the end of the first week:

"I am not worth anything less if I did not accomplish everything on my list." - @morganhnichols

As an engineer, when something isn't working as intended, I'm used to taking a step back to analyze my approach. However, because I didn't know what questions to ask, I reached out on Twitter to see if there were variations in how other people hustled. This process started from the beginning of my journey, but it took time for Twitter's algorithm to update my timeline with tweets from people that I don't follow.

Worthy of its own credit is how she handles her son interrupting her video streams and then gracefully jumps back into her content. This is handled a lot smoother than other content I've seen...

One of her tweets caught my eye while I was scrolling through her timeline. This was a cornerstone moment in my personal development.

Sometimes the internet algorithms are annoying with their keyword matches and ad targeting. This wasn't one of those instances. I won't spoil the video, because it's definitely worth the time to watch, though as the title suggests, it talks about how a single parent can juggle life, work and everything in between.

After watching that video, I felt ready to take on the week in full force. Here is everything I modified/accomplished during week 2:

However, this success did come at a cost

I was feeling great about what I was getting done and setup in my pipeline, but I got over my head. I was no longer staying up late to work, but staying up simply for the sake of working. I wanted to be out there. I wanted to get noticed, and I tried to make everyone happy.

I had forgotten about self-engagement and as such, week three was largely hustling to make sure the ground didn't collapse from under me.

This is a good spot to note that the hustleTwitter mentality isn't without its own large opposition. Many share the idea that it's just not healthy.

@MelTranfield Hustle culture, comparing ourselves to others, and all of that is a lie imo. There are certain things that we can do to get us further, but filling our lives with work is a capitalist scam by the folks who grow rich off of our work. I work 40 hrs/week & study 10 hrs/week.

It's important to not waste too much time, but hustle/productivity culture is toxic too. If possible, don't burn yourself out. Rest is important. Take care of yourself. You'll be better able to care for others if you do.

As the final week came and went, I spent a lot of time thinking about what I had learned and what I would carry forward.

On one hand, I didn't like how I felt like I wasn't being the best parent I could be, on the other hand, I was proud of what I could say I was getting done--even if it was at the expense of my health. It did beg the question though, why am I working so hard?

This series of introspection actually reminds me a lot of the story of the business man and the fisherman, a 1 minute read by Paulo Coehlo that you should check out.

However, if you've gotten this far and you're waiting for me to reveal the perfect framework, I'm sorry to disappoint you.

Do what works best for you, when it makes sense.

There are going to be times when you have to buckle down and hustle. What I found is that it should be a means to an end.

Adopting a hustle mentality as a persona or long-term strategy isn't something I'm willing to do, simply because I don't have to.

I can't deny however, that in the course of a month, I made a solid impact on my online and local community, I made thousands of extra dollars, and there are parts that I look forward to continuing.

So if I'm in the zone on a project and want to stay up late, I will. If my son is tired after daycare and I don't get much time with him before he passes out, then I'll go to sleep early and make breakfast in the morning while we watch cartoons together. It really is a balance.

With that said, there are a couple of key aspects that would be best for everyone to do:

Are you a hustler? Completely against it? Somewhere in between? Feel free to drop a comment below, or follow me on Twitter so we can chat! In the meantime, goodnight😴

The ‘done is better than perfect’ approach to programming

The only productivity advice you need: The two-day rule