The test automation industry is rapidly transitioning towards artificial intelligence to tackle challenging issues. AI can decipher subtle changes in a GUI, learn patterns for recommendations, consume massive data, take on repetitive tasks, and can potentially reduce development costs. But can it address the shortage of skilled test automation engineers?

There are a lot of tools and programming languages test automation engineers need to possess. There are plenty of jobs of this ilk, however, most go unfilled or take a long time to fulfill. Most companies are seeking specialists rather than generalists. According to a hiring manager, the majority of those prospects he’s interviewed either lack the required technical skills or have no comprehension of QA and testing principles. 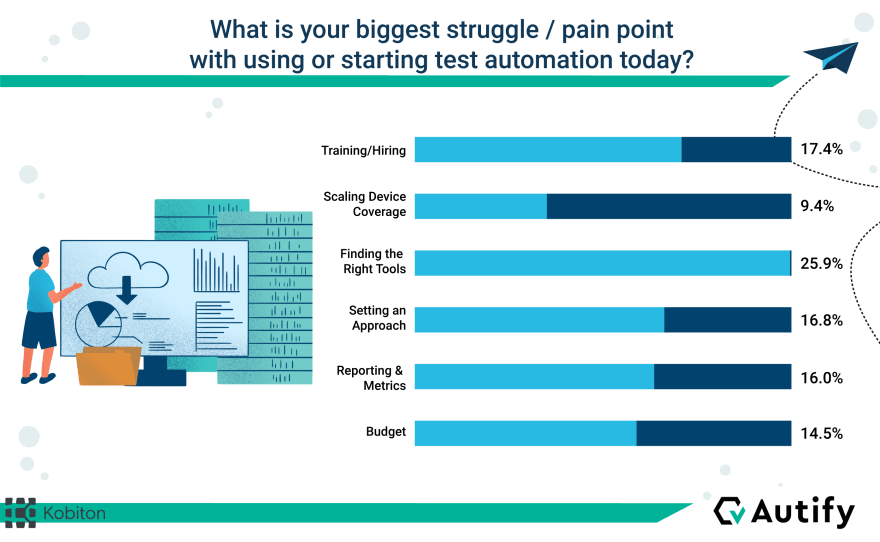 In a study, one of the greatest struggles companies face with test automation is finding the right tools, followed by training/acquiring skilled automation engineers. Tools and people are common obstacles here. Regarding the latter, artificial intelligence is one of the key indicators for overcoming the challenges of humans. We don’t anticipate it to eliminate jobs, but used as a tool to produce superior software, faster.

So, can artificial intelligence solve test automation engineer shortages? I believe it can, as the investment prioritization is there for many companies. DevOps teams are always exploring better tools. Since new tools are introducing AI learning algorithms into their platforms, this will rid the need for such a scarce role, and place the responsibility back on testers. Some codeless AI-based testing platforms are so user-friendly, they require no coding of test scripts, nor maintaining them. This means less skilled individuals on the QA team can learn and apply the testing software to the lifecycle.

Are you a test automation engineer? Are you a tester? Or apart of a software quality assurance team? I’d like to hear your thoughts on this perplexing question in the comments!

namynot
Antonio Wells has more than 20 years of IT experience. Wells has founded several tech startup companies in his tenure.
How to integrate test automation into software development cycles?
#testing

Once suspended, namynot will not be able to comment or publish posts until their suspension is removed.

Once unsuspended, namynot will be able to comment and publish posts again.

Once unpublished, all posts by namynot will become hidden and only accessible to themselves.

If namynot is not suspended, they can still re-publish their posts from their dashboard.

Once unpublished, this post will become invisible to the public and only accessible to namynot.

Thanks for keeping DEV Community 👩‍💻👨‍💻 safe. Here is what you can do to flag namynot:

Unflagging namynot will restore default visibility to their posts.