John is a member of the NestJS core team

This article series covers the topic of integrating NestJS applications with other applications and services. This can be accomplished in several different ways; the approach covered in this series is to use a combination of Nest microservices and a message broker as the glue. In other words, Nest apps and external apps communicate with each other asynchronously through a message broker.

In these examples, we use NATS as the message broker. Note: some of the concepts here are common to all Nest microservices transporters, while others are specific to NATS. I try to identify those differences in the text.

Nest's microservices package is one of those technologies that can be a little hard to wrap your mind around. Not that it's overly complex — to the contrary, it presents an application programming model that is quite simple. I think the confusion comes from the use of the term "microservices", which has become so over-used as to be virtually meaningless, and from the fact that Nest's microservices package supports several considerably different use cases:

This article series covers the integration use case. To get there, it first covers some Nest microservices basics. Some of these basics might be of interest to you even if you are using the package for the first use case described above (inter-Nest-app communication layer). The articles are organized so you can skip the basics if you want, or if you want to come back later for reference, you can just read the parts you need.

I hope you find this article series helpful!

NestJS comes with a built-in versatile network communications-oriented subsystem called (perhaps somewhat confusingly) microservices. The core of Nest microservices, and the key to understanding them, is what Nest calls transporters. Transporters enable you to connect components over a network using a pluggable communications layer and a very simple application-level message protocol. Nest delivers a variety of transporters out-of-the-box, as well as an API allowing developers to build new custom transporters. This combination of architecture and features is extremely powerful.

A concrete example of a built-in Nest transporter is NATS. With the NATS-flavored transporter plugged in, Nest applications can communicate using the NATS messaging system. Since NATS is the intermediary for these communications, Nest can communicate not only with other Nest apps, but also with non-Nest apps, or a combination of both. This leads to four interesting use cases (Figure 1 below). 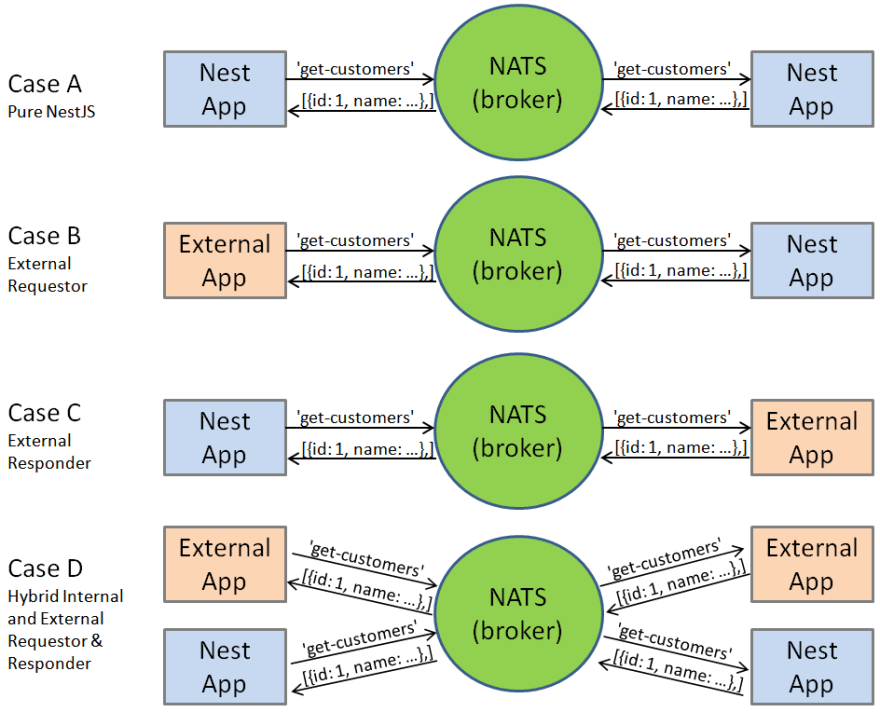 The current Nest microservices documentation focuses almost entirely on the first use case (Case A). And rightly so. If you simply want to benefit from a robust communication layer (e.g., easily adding load balancing and fault tolerance to increase the horizontal scalability of your Nest application), you really don't need to know about 90% of the material in this article series! (You may still benefit from a deeper understanding of the Nest microservices architecture, however, so I invite you to read on. Much of the material is still relevant background for leveraging Nest microservices).

The rest of this article series focuses mainly on the last three use cases — namely, using Nest microservices running on NATS to integrate with external systems.

To get there we need to lay some conceptual groundwork. Let's get started.

There's a lot going on in that diagram, even viewed at the highest level. As soon as we begin diving into the details, the terminology soup can easily get in the way of deeper understanding. So without further ado, let's take a crack at some basic concepts and terminology.

First, let's acknowledge that there are two main flavors of Nest transporters, which I'll refer to as:

This article focuses exclusively on the broker-based transporters, so let's discuss that flavor a bit further, using NATS as our case study example. We start with a description of a broker in general terms. An installed broker is comprised of several parts:

Message flow diagrams typically only label the broker component (in our case, for example, as a green circle in the middle of various other components), but think of the client API as embedded in the other boxes, connecting them to the broker.

The key advantage of broker-based messaging systems is they allow you to decouple the various application components from each other. Each need only connect to the broker, and can remain unaware of the existence of, location of, or implementation details of other components. The only thing the components need to share is a message protocol.

Nest makes use of a small set of features that are typically available across most brokers. This is a bit of an over-generalization — one we'll revisit later on — but for now, let's examine the common broker features that Nest relies on.

From Nest's perspective, brokers provide a basic message-oriented communication protocol that is usually described as publish/subscribe. Publish/subscribe can be generally understood in terms of the following diagram, with the red circles indicating the order of events in a publish/subscribe "conversation".

In that diagram, each client component is either a publisher or a subscriber. The salient point is that subscribers "register interest in a topic" and publishers publish messages about a topic. The broker sits in the middle and performs the following functions:

One thing obviously missing from this diagram is the request/response style communication model. This communication style is useful when we want to verify receipt of a published message and/or receive a response from whoever consumes the message. In fact, this is the style of message implicit in Figure 1 above (where we can infer that 'get-customers' is a request and the array of customers is a response). How do we get from publish/subscribe to request/response?

Nest (as well as some of the brokers natively, including NATS as we'll soon see) solve this problem in a handy way, by building a request/response capability on top of the publish/subscribe model. Let's say component A wishes to "get customers" from component B, which has access to a customer DB. Component A can publish a "get customers" message, and (assuming it has subscribed to that topic) component B receives it, queries the customer DB for a list of customers, and sends a response message. The response message is where the magic happens. In order for B to respond to A, they both must do a few things, agreed upon by convention:

A Vocabulary for Transporter Use Cases

With this in mind, we can give names to the two different types of messages our system handles, and also describe the roles of the participants in those messages. Don't worry, we're almost done with the preliminaries! These terms will all become second nature pretty quickly, but it turns out to be extremely useful to have a vocabulary that will let us quickly navigate a bunch of similar-looking data flow diagrams, and keep track of where our custom code fits in!

The first kind of message we can exchange based on the above capabilities is called an event. Any given component participating in event-based messaging can be either:

The second kind of message we can exchange is called a request/response message. In this exchange, a participating component can be either:

Most of the above is background that "just works" in an all-Nest world. Let's turn our attention now to integrating Nest apps with non-Nest apps using NATS as the communication intermediary.

In Figure 1, cases B, C, and D illustrate the different topologies for Nest-based apps to integrate with non-Nest apps using NATS. Note, we'll use the generic term "app" to describe these communicating components. As we'll see, these "apps" could be web apps, app services written in NestJS or some other platform, "microservices", etc., but the rules we'll describe are common regardless of the type of app involved. Let's briefly motivate the use cases.

In case B, we could be migrating a legacy app service, responsible for managing our customer DB, to Nest. In this case, our Nest app needs to play the role of responder that we described above. Going forward, we call this the Nest as responder use case.

In case C, we could be writing a new app, in Nest, that needs to query our customer DB using the existing (legacy) service. In this case, our Nest app needs to play the role of requestor that we described above. Going forward, we call this the Nest as requestor use case.

We'll examine each use case in more detail, including sample code you need to make this work (reminder full repository with usage notes here). Before we can do that, we need to understand a little more about how Nest components interact with the broker. We cover this in the next installment in the series.

Feel free to ask questions, make comments or suggestions, or just say hello in the comments below. And join us at Discord for more happy discussions about NestJS. I post there as Y Prospect.

What does an outhouse have in common with modern software development?

Once suspended, nestjs will not be able to comment or publish posts until their suspension is removed.

Once unsuspended, nestjs will be able to comment and publish posts again.

Once unpublished, all posts by nestjs will become hidden and only accessible to themselves.

If nestjs is not suspended, they can still re-publish their posts from their dashboard.

Once unpublished, this post will become invisible to the public and only accessible to John Biundo.

Thanks for keeping DEV Community safe. Here is what you can do to flag nestjs:

Unflagging nestjs will restore default visibility to their posts.