At NewDay, we used to create backend services and front-end web apps within the same team (or between teams who worked together closely). By growing fast and becoming more mobile oriented, the system architecture is now developing into BFF (Backends for Frontends). That means front-end developers should trust APIs created by other teams and API teams should feel safe to change their APIs.

Contracts are essential in API based architectures (Microservices or BFF), but what if the contract needs to be changed? Who should be notified of the changes and how should they be notified?

These are the issues Consumer Driven Contract Testing solves.

It’s essential that an API team (Provider) and front-end team (Consumer) agree on a contract and develop their code accordingly. In BFF model, the idea is that there are many Consumers of an API - for example mobile and web app teams. When the Provider changes part of the contract, the traditional way of emailing or putting a message in a Slack/Teams Channel is not practical - each Consumer may not know exactly which part of the contract they are using at their end.

Consumer driven contract testing is an API test approach which doesn’t test if the API is working fine, but checks if the contract is not-broken. 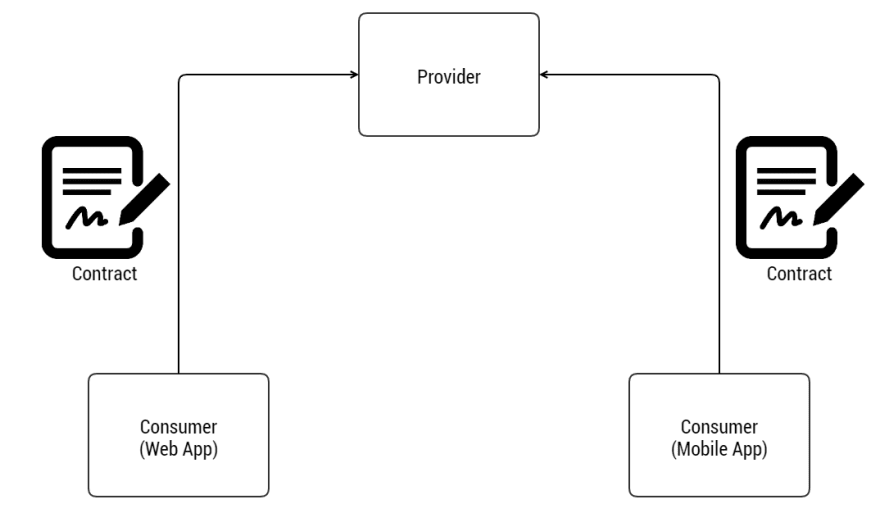 Let's say we have an API for setting marketing consent and both mobile and web apps are using them; they are consumers. The API accepts an object with 5 Boolean fields:

In this scenario, mobile and web app teams write their own contract tests and will run these tests in their own CI pipeline.

There are different tools to write Contract Tests. The most common ones are:

At Newday, we use Postman to write contract tests, Newman to run the tests in CI (TeamCity) and the Newman reporter to see reports in TeamCity.

Notice at this point we call our tests, “API tests”, this is because Consumer driven contract tests are only an approach; they are basically API tests.

Here is an example of an API test to validate the schema of our above mentioned consent API scenario. This is the test written by the web app team. Recall they are not interested in the, “push” field, they haven’t put it as part of the schema validation. By clicking, “Send” the test will run and the results are displayed in the, “Test Results” tab. 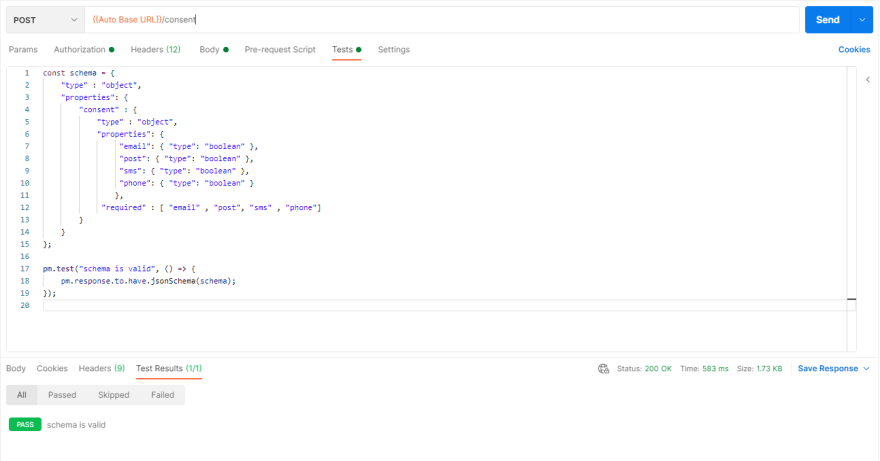 To be able to run the tests in CI/CD they need to be in a repository. First Export the API collection as a json file and push them to your desired repository. If you are using variables in your collection, you should export the variables to a separate json file. The variable file will be used when running the collection in next step.

The next step is to run the API tests in your local CLI and then we will do the same steps in TeamCity.

Newman is the CLI companion of Postman and it can execute Postman collections.

and run the saved collection

add -e flag to use an environment variable file

Now you can run your tests locally and see the result. hopefully all passed! 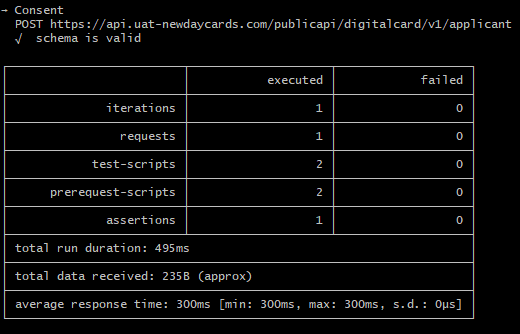 newman-reporter-teamcity is a newman report for TeamCity. It’s optional but recommended.

Install newman and the above package globally in your build:

Add another step to run the newman and generate the report.

I use two parameters to locate the postman collection file and postman environment file.

Now you can be sure that whenever there is a change in API the contract tests will run and the correct team can be notified if the contract is broken.

Who owns the contract tests?
The Consumer driven contract tests can be done in many ways and you should implement the approach best suited to your products and teams.

I believe the Consumer is the owner of the contract tests and Provider should not change these tests.

Where to put the tests (in this example the postman collection)?
I prefer to put them in the same repository as the API (Provider’s repository).

Once suspended, newday-technology will not be able to comment or publish posts until their suspension is removed.

Once unsuspended, newday-technology will be able to comment and publish posts again.

Once unpublished, all posts by newday-technology will become hidden and only accessible to themselves.

If newday-technology is not suspended, they can still re-publish their posts from their dashboard.