We all must build fast software, right? Right? It’s true that microservices tend to introduce latencies - stateless functions mean a whole lot more network calls, and you can wave goodbye to data locality. But a microservice is still dependent on its own code being fast, and at least fast enough.

In the past we’ve relied on profilers, stopwatches, dedicated performance teams, and sometimes plain old complaints from the field. All of these methods require some form of measurement; unfortunately they tend to be “big picture” performance that lacks detail - and often without concrete scenarios. This gets very expensive very quickly.

Very often, you just want to measure the code’s performance without the baggage of dependencies. You might have a critical piece of code that absolutely must meet certain performance criteria. Measuring such microcode cam obviously be done with profilers - dotTrace, ANTS to name just two. The problem is they bring their own baggage as well, and worse can’t be easily relied upon in a CI pipeline. So how can you measure microcode performance in CI? Unit tests are a terrible idea, what else is there? Step forward BenchmarkDotNet.

Measure your code’s performance with benchmarks at near zero cost and. All you need are:

We’ll talk about how to write simple benchmarks, how to run them and how to interpret the results.

.NET Core 3.1 is perfectly fine, if that will save you some time.

BenchmarkDotNet does what it says on the tin: benchmark .net code. It’s available as a Nuget packaged library for inclusion into your .net console applications. It is very widely used by all major players in the .net world, including the dotnet core runtime project itself.

Let’s say you have a very basic Fibonacci implementation - and you want to measure its resource usage growth as more numbers are generated.

By “resource usage” I mean time and memory consumed per method call.

In other words, you'd want to know how it scales. Here's an implementation of "get the first N Fibonacci numbers":

No prizes are sought for best efficiency here. Please do not take this as a reference implementation of Fibonacci!

To answer the scaling question, we would implement a benchmark, run it and analyse the results. Skipping forward a rendered benchmark report would look something like the below:

What do all the headers actually mean?

OK… what do those numbers really mean?

Let’s look at each iteration of Count, and we’re using it here to get the first Count numbers of the Fibonacci sequence.

Where Count is 13 (yes, the parameters themselves follow Fibonacci!) the mean time is 407.2 ns: four times what Count=1 is, yet the Count is 13 times bigger. I’ll take that, for now.

If we plot Count against the time ratio we see this: 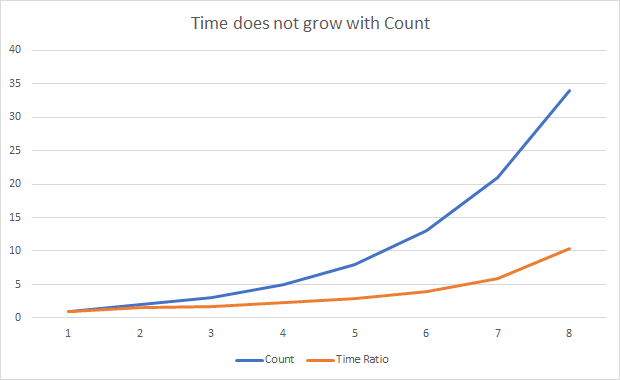 In other words, time used does not grow as Count grows. If it did, the lines would be parallel.

So the benchmarks are showing that the implementation has reasonably acceptable scaling. It's not constant time, but it’s better than O(n) time: a pleasant surprise.

If you're not satisfied with the performance results, simply make your changes, re-run the benchmarks & re-analyse. That's it.

You haven’t mentioned the memory yet, have you?

Trust me, I’m getting to that.

If we plot Count against the allocation growth ratios, we see this: 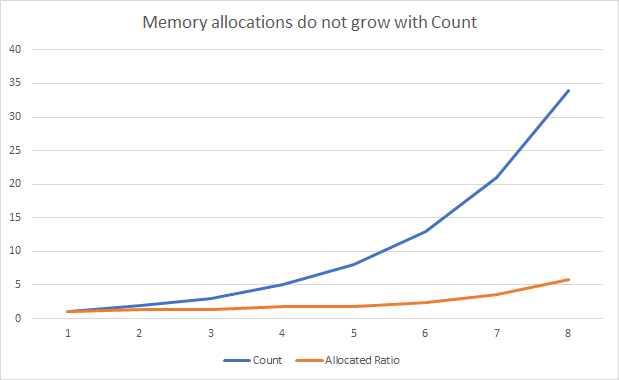 This means the used memory isn’t constant either: the memory used for Count=34 is greater than the memory used for Count=1. Again it's better than O(n). To my mind this is OK, but not great: we need more investigation. It's probably incurred with yield return, but do we want to sacrifice the readability? Probably not, but in any case we’re getting new perspectives on our code. This is a good thing.

What other rendered reports can you get?

You can output a markdown version of your report and many other formats; Markown output is GitHub inspired.

You can use the following attributes to output the many different types of rendered reports:

An example of the GitHub Markdown report:

Charting is supported through the R project. As R is a world in itself, I’m going to skip the subject.

If you want charts, consider importing the rendered JSON into Excel. The CsvExporter attribute will generate a CSV with the data you need.

What does the benchmark code look like using BenchmarkDotNet? It might surprise you to see how simple it is.

BenchmarkDotNet relies on declarative code over which it will reflect. Leaving aside the class attributes (more on those later), note the [Params] attribute over Count from the report above, likewise [Benchmark] and Fibonacci().

You’ll notice that the benchmarks have a return type of void and do not have any assertions. Remember: we’re not proving functional correctness here, we’re measuring resource usage.

A simple demonstration of BenchmarkDotNet

There’s only the one C# project in there - benchmarkdotnetdemo.csproj - that contains the minimal files.

BenchmarkDotNet will only work if the console project is built with a Release configuration, that is with code optimisations applied. Running in Debug will result in a run-time error.

This is the Program.cs file, and like all C# console apps you need an entry point:

Aside from the standard method entry point let’s go over it bit by bit.

For bootstrapping BenchmarkDotNet, this is the only import you need.

This one-line-to-rule-them-all will perform all command line parsing, all help, all benchmark execution and all report generation.

One point here is .FromAssembly(typeof(Program).Assembly) - this informs BenchmarkDotNet of its benchmark search scope. Benchmarks are internally discovered by reflection - you’ll see soon enough.

NOTE: If you were to run the project without any command line arguments, BenchmarkDotNet will assume an interactive CLI.

.Run(args) returns a sequence of report objects comprised of the same data used for rendered reports: I’ve excluded them for simplicity. If you want to run benchmarks and fail CI builds if performance dips they are your first place to look.

There is a file called SimpleBenchmark.cs. Let’s have a look.

Just for completeness: note the similar declarations as SimpleBenchmarks.cs. In this case, we’re adding a [Params] parameter to support benchmark permutations.

How are benchmarks executed?

Without going into too much detail, BenchmarkDotNet will attempt to run your benchmarks many many times over to settle on mean and median values.

When you run the benchmarks you may first be confused by just how many iterations are involved, so let’s give a simplistic explanation. Modern OSs are preemptive multitaskers, CPUs have pipeline caches as well as instruction reordering features. .NET itself has the JIT compiler. This means that no single execution of code can be relied upon to give a canonical result.

This is part of the reason why unit tests are terrible for benchmarking! They only run once and incur their own (unaccounted) overheads.

JIT comes at a cost: the first time any .NET code executes it must first be JIT compiled. The more complex the code the higher the JIT cost, usually showing as CPU and time costs. As we’re interested only in runtime performance, these steps eliminate JIT costs from measurements.

In the same vein other warmup steps are run to eliminate other “once only” costs, for instance to warm up pipelining caches. 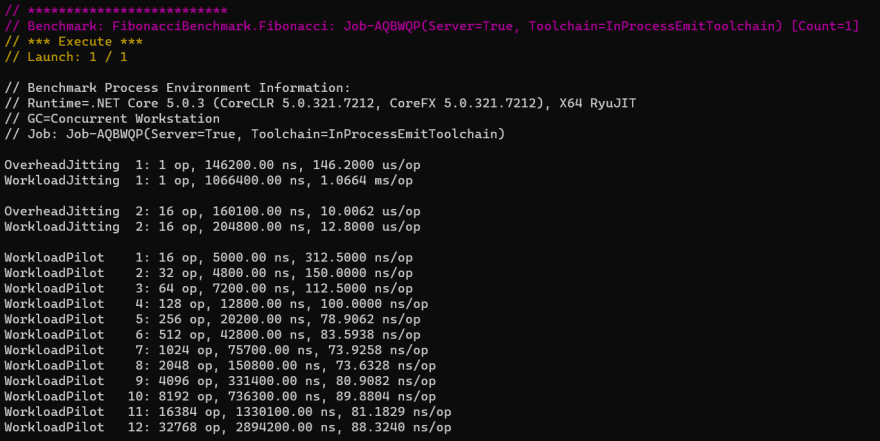 After these steps have completed, BenchmarkDotNet will iterate these operations to yield the final statistics; these are shown as WorkloadActual steps. 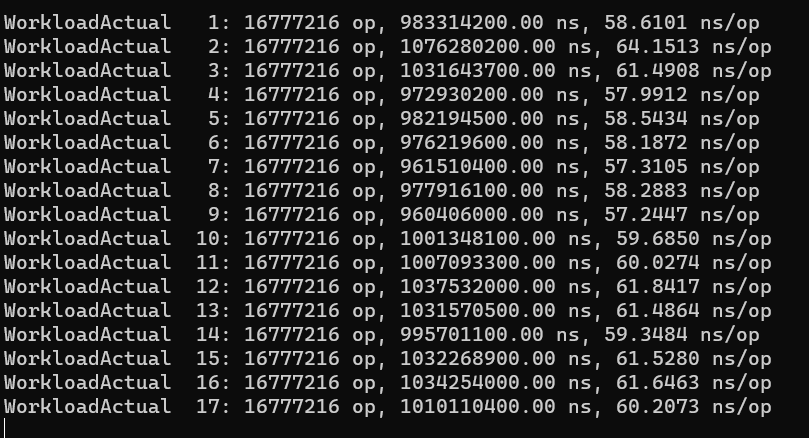 If you want more detail, please refer to BenchmarkDotNet’s own documentation. In these code samples we’re using the default Throughput strategy for microbenchmarking.

How long does it take?

It depends ;) Simple calculations, such as in the demo project, will run in under a minute. Adding permutations (such as with [Params]) will linearly increase the benchmarking time, as each parameter will be benchmarked in its own right.

With that in mind, it’s quite clear that resource hungry algorithms, benchmarked with a large variety of parameters, will take a considerable amount of time.

Don’t expect to parallelise BenchmarkDotNet: it runs benchmarks sequentially. Thread context switching is itself a cost and extremely difficult to compensate for.

What have we learned?

How to incorporate into CI?

Should There Be A Healthy Tension Between Product and Engineering Teams?

How to enable Cache in Vue Storefront 2

Once suspended, newday-technology will not be able to comment or publish posts until their suspension is removed.

Once unsuspended, newday-technology will be able to comment and publish posts again.

Once unpublished, all posts by newday-technology will become hidden and only accessible to themselves.

If newday-technology is not suspended, they can still re-publish their posts from their dashboard.