1. Remap the leader key to the space bar

It might look strange, but think about how little you use it on normal mode. The space bar is a pretty accessible key on your keyboard and it will reduce your pinky pain.

2. Use Localvimrc to customize your vim per project

Search local vimrc files (".lvimrc") in the tree (root dir up to current dir) and load them.

It is possible to define a whitelist and a blacklist of local vimrc files that are loaded or ignored unconditionally.

The plugin can be found on Bitbucket, GitHub and VIM online.

Resource all local vimrc files for the…

I have lot of customizations for Vim, but making them work on each and every project I work is nearly impossible. For example for JavaScript/TypeScript. In some projects I just use plain JS, in others JS with Flow, in others TypeScript but a bit of plain JS too... and setting up vim with specific linters, shortcuts, etc for each one of them is painful.

Besides that, sometimes I don't want to make certain configurations public, so adding them to my public dot-files is not an option.

With this plugin you can easily (and more or less safely) keep those configurations scoped to the projects where you need them.

If (like me) you're not a native English speaker it is even more helpful to have spell checking. This simple piece of config will spell check your git commit messages and the markdown you write.

Remember when Vim marks a spelling issue you can see the available options with z=. You want to know more about spelling? Check :help spell on Vim.

4. Use mnemonics for your shortcuts

I have a lot of shorcuts on Vim. Remembering them all is impossible. I group them with mnemonics which are simpler to remember. For example, all my git related mnemonics are grouped under <leader>g so <leader>gs means :Gstatus. Most are obvious, but I've added some comments where not.

BTW, If you are interested those 2 use fugitive and gv

fugitive.vim: A Git wrapper so awesome, it should be illegal

Fugitive is the premier Vim plugin for Git. Or maybe it's the premier Git plugin for Vim? Either way, it's "so awesome, it should be illegal". That's why it's called Fugitive.

A git commit browser in Vim 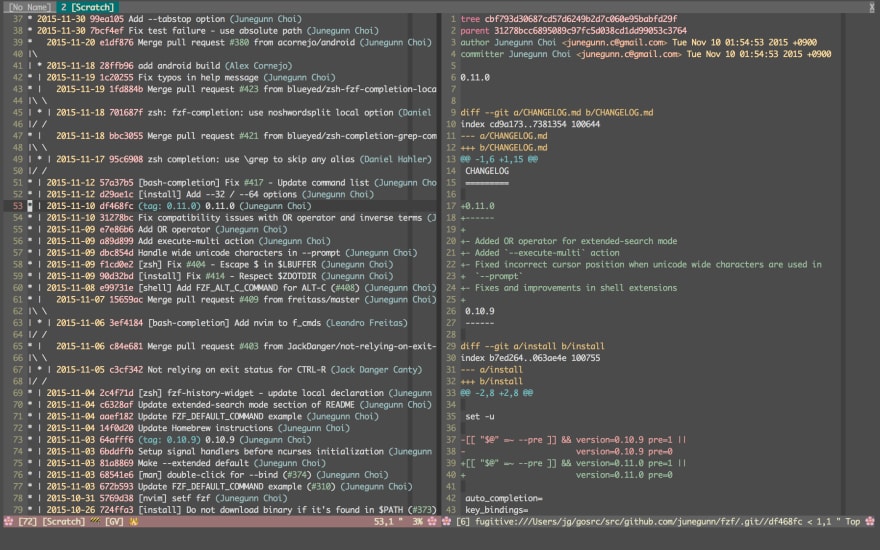 gitv is nice. But I needed a faster, and possibly simpler alternative that I can use with a project with thousands of commits.

:GV or :GV? can be used in visual mode to track the changes in the selected lines.

From 2 of my favorite vim plugin authors. Tim Pope and Junegunn Choi

5. Learn how to navigate the help.

Vim's help is great. Not only that, most plugins you install come with a very well crafted help. Understanding how to navigate it makes your life easier. It is pretty easy:

Let me explain that: Vim can do A LOT, you don't know how much (and neither do I). The only way to do it is to research and play with it. Many of the things I do on my .vimrc come from other people's dotfiles.

There are literally thousands of dotfiles out there, people shares them (I do share mines!). If you are interested on improving your Vim's workflow go check them. Find famous Vim authors and check what they do. You'll be amazed on how much you will learn!

Explore and Delete Files in vim

Using Vim as your main editor for web development