I like GitLab a lot. Yet, there's no denying that GitHub has become the de facto standard to host Open Source projects. With GitHub Actions, it's now possible to implement entire Continuous Integration pipelines without leaving GitHub.

Before creating the CI pipeline - and running it, it's necessary to configure the underlying Maven project.

Maven is a large subject, that deserves more than this post can cover. But to understand the rest of this post, here are the most important parts.

Maven references projects by a triplet of unique coordinates composed of:

For example, the sample project's coordinates are:

The output of a project is an artifact e.g. a JAR.

You can append the version of a project with -SNAPSHOT. A snapshot version is under development; a non-snapshot one, a regular release.

Some projects provide milestones, and/or release candidates before the final release. In that case, Maven doesn't natively offer a naming scheme for that. For example, the Spring framework append .Mx, .RCx, and .RELEASE to the version: they are not considered snapshots.

The Maven Release plugin manages the release process. It provides two complementary goals, prepare and perform. They do the following:

For the required SCM information, the Maven POM offers a dedicated section to configure it. With our sample, it looks like:

The above snippet allows for different protocols: git, http, https, ssh, or even file. Authenticating with the git protocol requires a SSH key. In the context of a CI pipeline, this is not desirable.

Thus, the above configuration snippet needs to use the http protocol. This requires credentials in the form of a user/password pair. Maven decouples project-specific data, from data shared across projects, such as security-related data. The POM is responsible for the former, while the $HOME/.m2/settings.xml file holds the latter. Each credentials pair requires a unique identifier.

To configure a Maven project to use a specific server, add a property with the project.scm.id key and the server's id as the value.

Maven authors designed Maven around a plugin architecture. By itself, Maven just provides a build lifecycle, with a set of build phases. The Maven engine calls each phase in order; the cycle cannot advance to a later phase without having run through earlier phases. For example, phases in the build lifecycle include compile, test, integration-test, package and deploy. test cannot run without first running compile.

You can bind plugin goals to a specific phase. By default, Maven binds a couple of goals. For example, the package phase binds the maven-jar-plugin:jar goal. Running mvn package will execute all goals bounds to all phases in order, up until package.

Calling the release:perform goal launches a Maven fork that runs the deploy phase. By default, Maven binds the deploy:deploy goal of the Maven Deploy plugin to deploy. This implies Maven has run goals bound to the package phase before. For this reason, the build artifact is available when deploy starts. Deploying means that Maven will push the artifact to a registry that needs to be explicitly configured.

In the context of this project, the artifact is a JAR, and the registry, GitHub. This translates into the following configuration snippet:

The build should execute both the release:prepare and release:perform goals.

By default, release:prepare is interactive: the plugin asks for the release version, as well as for the new snapshot version. For an automated build, this is not possible.

It's possible to run Maven in batch mode by using the command-line -B flag. In that case, the plugin automatically infers both release and snapshot versions.

The final preparation step is to become fully independent of the Maven version.

In the future, the specific Maven version used to build the project might not be available anymore. Versions that are available at that time might not be compatible with it. For this reason, a Maven plugin provides a wrapper. A wrapper self-executable JAR that can kickstart a specific version of the mvn tool regardless of the environment. To create such a wrapper is straightforward:

This creates a couple of files, including a .mvn folder, inside the project. You need to add all those files in the SCM.

From this point on, instead of using the mvn command, you should use the mvnw script located at the root of the project. The build doesn't require a local Maven installation anymore.

Now that we configured the POM, it's time to integrate Maven in the GitHub build.

Remember that the release:prepare goal actually creates a tag. As an alternative, it's possible to configure Maven to reverse the default flow, so that it triggers the build on a tag, and then pushes to a branch.

Existing CI tools make use of a configuration file stored at the root of the repository:

The first step is obviously to checkout the repo:

The next step is to install a JDK:

I lost quite some time trying to find an action that creates the settings.xml file. The setup-java action is actually the simplest way to achieve that. Just remember that it does more than configure just Java.

Because release:prepare actually commit, it's necessary to configure the user and email to use:

The last step is actually the most straightforward.
Just run the Maven command from above.

When the master branch is ready for a release, just push it to the release branch:

This triggers the workflow.

The successful run of the workflow has created a release, a tag, and a deployment: 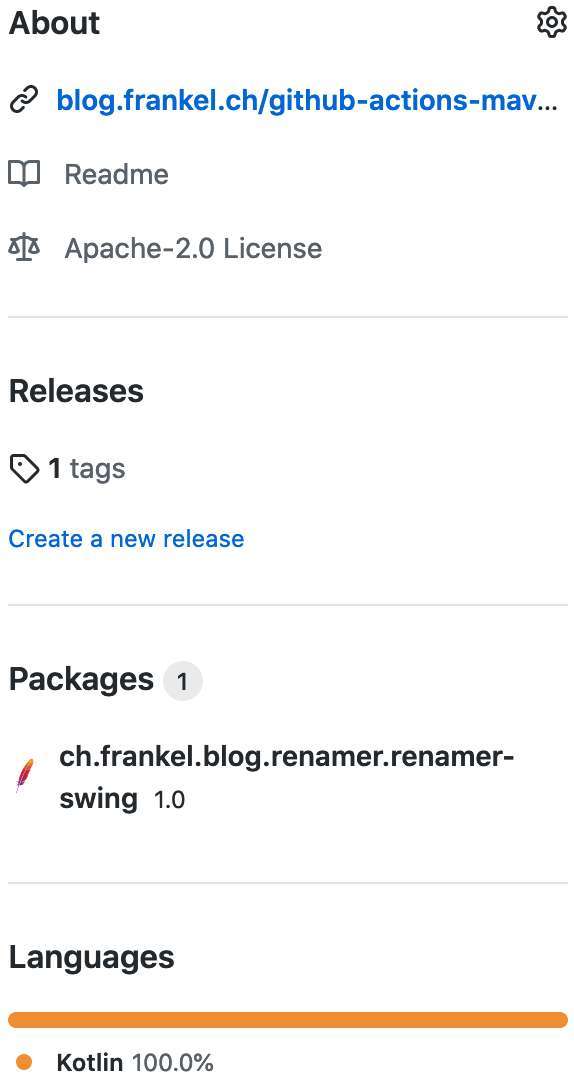 Managing Maven releases with GitHub Actions is not trivial. Yet, it requires just a bit of experience to make it work. It's my hope that this post can help Maven users leverage the full power of GitHub Actions by providing this experience.

Originally published at A Java Geek on August 30th, 2020

How to cache dependencies in GitLab

Include (or omit) Node.js devDependencies in your CI environment