In my previous article Everything About Method Overloading Vs Method Overriding, I have discussed method overloading and overriding, their rules and differences.

In this article, we will see How Does JVM Handle Method Overloading And Overriding Internally, how JVM identifies which method should get called.

Let’s take the example of parent classMammal and a childHuman classes from our previous blog to understand it more clearly.

We can answer this answer in two ways, Logical way and Physical way, let's take a look at the logical way.

Logically we can say, during compilation phase calling method is considered from the reference type. But at execution time method will be called from the object which the reference is holding.

Well, it is pretty simple until we keep it at the conceptual level only. Once we get the doubt that how JVM is handling all this internally? or how JVM is calculating which method it should call.

Also, we know that overloaded methods are not called polymorphic and get resolved at compile time and this is why sometimes method overloading is also known as** compile-time polymorphism or early/static binding**.

But overridden methods get resolved at runtime time because the compiler does not know that, the object which we are assigning to our reference have overridden the method or not.

In this section, we will try to find out physical proof of all aforementioned statements and to find them we will read the bytecode of our program which we can do by executing javap -verbose OverridingInternalExample. By using the -verbose option we will get the descriptive bytecode same as our Java program.

Above command shows the bytecode in two sections 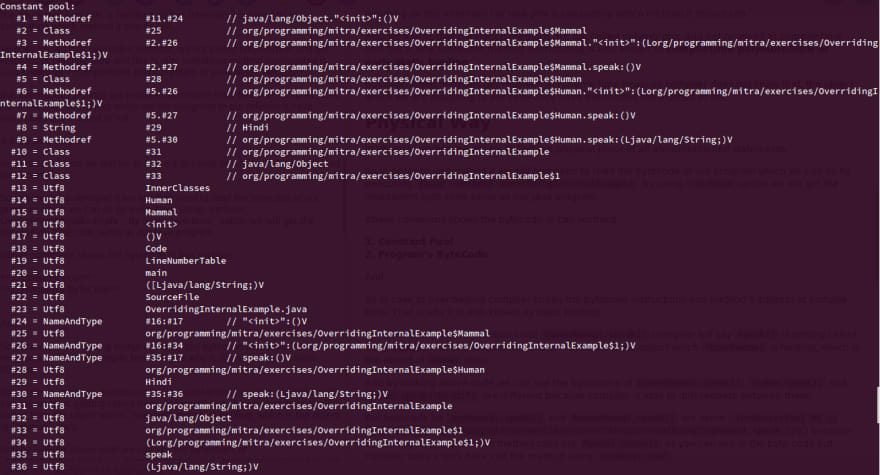 In afore-mentioned code humanMammal.speak() the compiler will say speak() is getting called from Mammal but at execution time it will be called from the object which humanMammal is holding, which is the object of the Human class.

And by looking at the above code and images we can see that the bytecodes of humanMammal.speak() , human.speak() and human.speak("Hindi") are totally different because the compiler is able to differentiate between them based on the class reference.

So in the case of method overloading compiler is able to identify the bytecode instructions and method’s address at compile time and that is why it is also known as static binding or compile time polymorphism.

Bytecode for anyMammal.speak() and humanMammal.speak() are same ( invokevirtual #4 // Method org/programming/mitra/exercises/OverridingInternalExample$Mammal.speak:()V ) because according to compiler both methods are called on Mammal reference.

So now the question comes if both method calls have same bytecode then how does JVM know which method to call?

Well, the answer is hidden in the bytecode itself and it is invokevirtual instruction, according to JVM specification

invokevirtual invokes an instance method of an object, dispatching on the (virtual) type of the object. This is the normal method dispatch in the Java programming language.

JVM uses the invokevirtual instruction to invoke Java equivalent of the C++ virtual methods. In C++ if we want to override one method in another class we need to declare it as virtual, But in Java, all methods are virtual by default (except final and static methods) because we can override every method in the child class.

All these references combinedly used to get a reference to a method and class in which the method is to be found. This is also mentioned in JVM Specification

The Java virtual machine does not mandate any particular internal structure for objects 4.

And the bookmark 4 states

In some of Oracle’s implementations of the Java virtual machine, a reference to a class instance is a pointer to a handle that is itself a pair of pointers: one to a table containing the methods of the object and a pointer to the Class object that represents the type of the object, and the other to the memory allocated from the heap for the object data.

But again the question comes, how invokevirtual internally do this? Well, no one can answer this because it depends on JVM implementation and it varies from JVM to JVM.

And from the above statements, we can conclude that an object reference indirectly holds a reference/pointer to a table which holds all the method references of that object. Java has borrowed this concept from C++ and this table is known by various names which such as virtual method table ( VMT ), virtual function table ( ** vftable** ), virtual table ( vtable ), dispatch table.

We can not sure how vtable is implemented in Java because it is JVM dependent. But we can expect that it will be following the same strategy as C++ where vtable is an array like structure which holds method names and their references on array indices. And whenever JVM tries to execute a virtual method it always asks the vtable for its address.

There is only one vtable per class means it is unique and the same for all objects of a class similar to Class object. I have discussed more on Class object in my articles Why an outer Java class can’t be static and Why Java is Purely Object-Oriented Language Or Why Not.

So there is only one vtable for Object class which contains all 11 methods (if we don't count registerNatives) and references to their respective method bodies.

When JVM loads the Mammal class into memory it creates a Class object for it and creates a vtable which contains all the methods from the vtable of Object class with the same references (Because Mammal is not overriding any method from Object) and adds a new entry for speak method.

Now here comes the turn of Human class and now JVM will copy all entries from the vtable of Mammal class to the vtable of Human and adds a new entry for the overloaded version of speak(String).

JVM knows that Human class has overridden two methods one is toString() from Object and second is speck() from Mammal . Now instead of creating new entries for these methods with updated references. JVM will modify the references to the already present methods on the same index where they were present earlier and will keep the same method names.

The invokevirtual causes the JVM to treat the value at method reference #4, not as an address but as the name of a method to look up in the vtable for the current object.

I hope now it would have become a little bit clear that how the JVM mixes constant pool entries and vtable to conclude which method it is going to call.

You can find the complete code on this Github Repository and please feel free to provide your valuable feedback.

Once suspended, njnareshjoshi will not be able to comment or publish posts until their suspension is removed.

Once unsuspended, njnareshjoshi will be able to comment and publish posts again.

Once unpublished, all posts by njnareshjoshi will become hidden and only accessible to themselves.

If njnareshjoshi is not suspended, they can still re-publish their posts from their dashboard.

Once unpublished, this post will become invisible to the public and only accessible to Naresh Joshi.

Thanks for keeping DEV Community 👩‍💻👨‍💻 safe. Here is what you can do to flag njnareshjoshi:

Unflagging njnareshjoshi will restore default visibility to their posts.