Cypress 4.5.0 is out with a long-awaited feature: first-class support for framework’s components render.

I’m working on a big UI Testing Best Practices project on GitHub, I share this post to spread it and have direct feedback.

UPDATE: Cypress 10 is out with Component Testing integrated with E2E testing, please check it out and ignore all the configuration steps reported below since they are outdated!

UPDATE: Cypress 7 is out with a brand-new Component Test support, check it out! And other exciting news is on the way thanks to the Storybook 6.2 release!

Two months ago, I wrote the “Testing a Virtual List component with Cypress and Storybook” article. This is an extending article now that unit testing React component is possible with Cypress.

The goal of the previous article was to run some experiments in the React Component Testing world, a really important topic nowadays.

The motivations were pretty simple:

And the approach was simple too:

But there were some caveats…

Some of the problems of my experiment could be mitigated by Dmitriy Tishin approach but the solution is not optimal yet, but then…

Cypress 4.5.0 has been released

On April, 28th, Cypress 4.5.0 has been released, the only released feature is the following

The component is always the same, the VirtualList, read more about it in the previous article. We need to set up both the cypress-react-unit-test and the TypeScript conversion (the component is written in TypeScript, it is part of a Lerna monorepo, and it is compiled with Webpack). Both the steps are straightforward but if the plugin has an installation-dedicated section in its documentation, the TypeScript compilation could not be obvious because there are, outdated or partial, a lot of different approaches and resources.
The most concise yet effective solution is André Pena’s one, so all I had to do is:

The above transpiling-related files, along with the following cypress.json file

are enough to start playing with a cypress/component/VirtualList.spec.tsx test! From the previous article, the first test was the standard rendering, the “When the component receives 10000 items, then only the minimum number of items are rendered” test, et voilà:

Compared to the Storybook-related article:

Nothing more, the Cypress test continues the same as the Storybook-related one 😊

Porting all the tests from the previous article is quite easy, what was missing is the callback testing part of the “selection test”.

Please refer to the full SinonJS (wrapped and used by Cypress) Stub/Spy documentation for the full APIs.

Here a screenshot of the last test, the most complete one 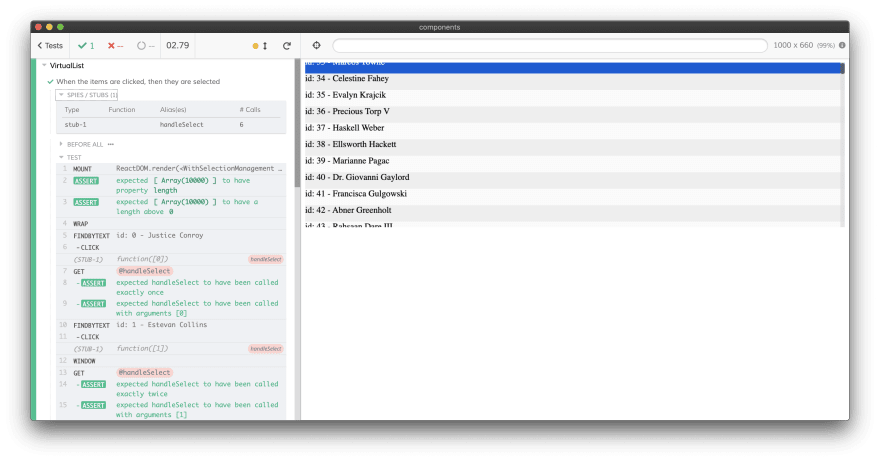 The last test with the stub checks.

and this is the recording of all the tests

What’s next? The cypress-react-unit-test plugin is quite stable and useful now, a whole new world of experiments is open and a lot of small-to-medium projects could choose to leverage Cypress as a single testing tool. I’m waiting for your comments and experience 😊

Other articles of mine you would find interesting: