Any system that has to maintain some kind of state eventually runs into the problem of data consistency. You might have multiple users trying to edit the same document, from a variety of devices, all of which have varying amounts of latency and connection issues. Data consistency is hard. Resiliency means being able to handle these kind of concurrency and availability issues. Approaches to this usually take the form of ACID guarantees, BASE (basically available, eventually consistent) and in the case of CRDT strong eventual consistency. Let's take the example of a realtime collaborative editor.

In the above photo, there are 3 different sites where changes are sent and received. Elliot denotes Site 1, Kate is Site 2 and Nat is Site 3. Within Elliot's local document, he types some characters. This change is propagated to Kate and Nat. After which they individually make local changes to their document. Before the changes from Kate and Nat are propagated back, Elliot makes additional changes. The resulting state is the merging of all the changes that have been made.

This is where the result converges deterministically to the same result in every site (despite that there is latency, operations can come out of order, and there is no central server that dictates the source of truth). This is the basis of what Conflict-Free Replicated Data Types can provide.

How do we get events to be in the right order?

Getting events/actions/operations to be in the right order means we need some kind of scheme for timing. We have several ways to do this:

We can use the server's timestamp in a typical architecture to serve as the authoritative clock but this isn't available in distributed systems. Furthermore, if we tried to use the different timestamps that are on each of the different nodes we also run into the problem of clock drift.

Clock drifting occurs where a clock does not run at exactly the same rate as a reference clock. It gradually drifts apart or desynchronizes from the other clock. If you've ever had an issue with a remote linux server being drastically off on its timestamps, you need to use ntpdate and ntp to measure this clock drift and synchronization to a reference server.

Time, Clocks, and the Ordering of Events in a Distributed System

Leslie Lamport, widely considered to lay the foundation for his work in the theory of distributed systems, published a marvel of work in 1978 on time.

The concept of one event happening before another in a distributed system is examined, and is shown to define a partial ordering of the events. A distributed algorithm is given for synchronizing a system of logical clocks which can be used to totally order the events.

This paper describes what is known as happened before as a way of describing a partial ordering of the events in the system. In that, an event a happens before an event b if a happened at an earlier time than b. Following the fact that real clocks can't be reliable or necessarily used, then happened before has to be defined without using physical clocks.

In the above example, we have 3 processes. P0, P1, P2. We know that we have no global clock in this scenario. Instead all we have are messages that being passed around. A logical clock will increment a local timestamp based on whether it is sending or receiving using the following rules:

All processes start at 0 as the root timestamp. In this example, P1 will increment to 1 when it sends to P0. P0 receives this message and its local timestamp is still 0. Since it receives a message it takes the max of these values Max(0, 1) + 1 which would be 2.

P1 sends another message to P2 and does so by incrementing its now local timestamp again from 1 to 2. P2 receives this message and must take the Max(0, 2) + 1 which is 3. P2 sends a message to P1 and must increment its local timestamp from 3 to 4. P1 receives this message and takes the Max(2, 4) + 1 which is 5. Doing this kind of ordering helps us get closer to total ordering.

In enterprise circles, this is typically called event sourcing, where every operation is stored as data and playback is used when you need to construct the model.

The fundamental idea of Event Sourcing is that of ensuring every change to the state of an application is captured in an event object, and that these event objects are themselves stored in the sequence they were applied for the same lifetime as the application state itself.

Given that we have a complete timeline of all the operations that ever occurred in the state, we can replay/query/rebuild all or part of the compute history. To give a log total ordering we need to sort operations by time and then by unique origin.

Given that the focus of our problem is how to prevent inconsistencies between different sites, we need an approach that makes it mathematically always possible to merge and resolve concurrent updates without conflicts. CRDTs provide us with strong eventual consistency and there are two approaches:

State based CRDTs send their full local state to other sites. Merging is done by a function which must be commutative, associative, and it must be idempotent. An update also must monotonically increase the internal state, which is to say that the state always grows, even with deletions.

A good example of CvRDTs is in gossip protocols where the state of a replica is propagated and merged with other replicas when topologies change and help reduce network use when these states change.

Operation based CRDTs, as the name implies, only require sites to exchange the operations themselves. Operations are commutative, but they are not necessarily idempotent. This means that infrastructure must take into account that all operations on a site are delivered without duplication, but can be in any order. Because a deletion is just a placeholder (called a tombstone), an operation can always commute. This means something like the example in the figure where Site 1 deletes MD still translates fine to changes made on other sites since the characters are never really gone.

In almost every implementation of CRDT with respect to text, every character in the document has a unique identifier. Conflicts due to merging are all resolved by this unique identifier plus a logical timestamp per character (usually a Lamport Timestamp).

Questions on implementations and use cases

Having read through much of the literature, it's clear that there are a series of questions that need to be asked in order to properly define what kind of implementation should be selected. These questions might include:

But the most important question you should be asking:

What are actual real-word performance and usability characteristics based on the intended usage of the application?

Consider how Figma makes these tradeoffs by combining multiple CRDT-inspired techniques (associativity, commutativity, idempotent) with a last-write-wins (LWW) approach and a central server to coordinate some aspects of conflicts and updates.

Other things like tree re-ordering in the document, undo/redo behaviors, are resolved with domain specific desired implementations. Additionally, Figma side-steps the entire realtime text interleaving/merging issue due to the fact that the text content of a text element is just another property on an object. As such, changes in this system still follow the LWW model they have gone with.

Additionally, they go over the Fractional Indexing approach that looks very much like the approach seen in Logoot/LSEQ.

Given that you have no record of tombstones (like in the case of Logoot/LSEQ) then you run into the problem of interleaving edits on merge. However, Figma can make this trade-off due to the fact that it is a design tool not necessarily centered around realtime text editing.

At the end of the day, what we are ultimately working with is a set of shared data structures. We need a way to represent our model of interaction / application through the structures that help provide us with the mathematical guarantees and trade-offs all mentioned above. Some of the known types include:

There is a trick that Roshi (a distributed LWW-Set cluster built on top of Redis) that you can add which is garbage collecting on inserts. The trick is to garbage collect whatever item is in the existing add set or remove set depending on the incoming timestamp.

Ordered sequence, list, or even trees are considered part of the family of sequence CRDT implementations. There are a number of algorithms here that are typically used in collaborative editors as an alternative to Operational Transforms. Among the papers include: 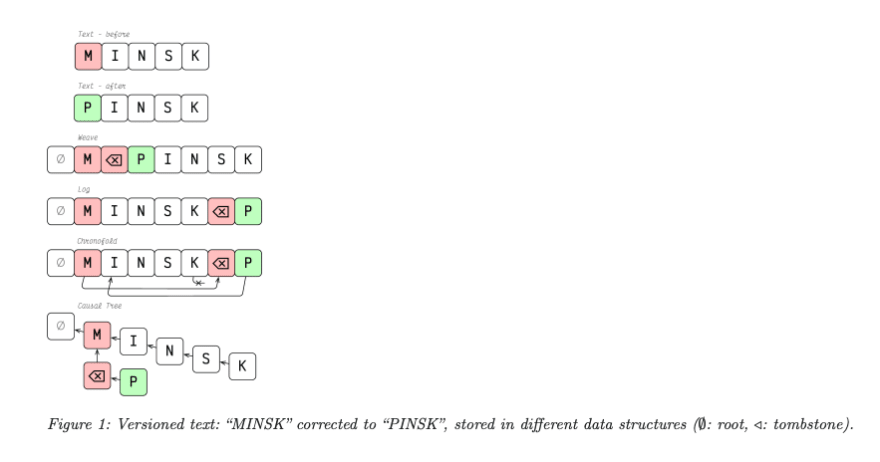 There is a lot of literature out there. Having spent the time to look through these solutions the best one I've come across so far is YJS. I interacted for a bit with the author over twitter and the author has a series of benchmarks designed around actual real-world editing/conflicts and other specific scenarios that are ideal for comparing implementations.

Even still, these solutions are not a catch all and they all have pitfalls and bottlenecks/edge cases that haven't been fully sorted out. Splicing for instance remains a problem in CRDT and there doesn't seem to be a decent solution for it just yet.

In any case, I learned quite a bit and hopefully you did/will to!

For additional resources on CRDTs:

If you liked this article and are so inclined, give me a like and a follow. Also check out my twitter for similar and other updates!

The Logic Behind Tic-Tac-Toe game

Tom Holloway 🏕
Software Developer for as long as I can remember, building startups and projects. I've worked mostly in analytics, devops, and data science research. Running has proved useful so I enjoy doing it.
Resources for learning about CRDT for realtime collaboration
#crdt #systems #productivity

Once suspended, nyxtom will not be able to comment or publish posts until their suspension is removed.

Once unsuspended, nyxtom will be able to comment and publish posts again.

Once unpublished, all posts by nyxtom will become hidden and only accessible to themselves.

If nyxtom is not suspended, they can still re-publish their posts from their dashboard.

Once unpublished, this post will become invisible to the public and only accessible to Tom Holloway 🏕.

Thanks for keeping DEV Community 👩‍💻👨‍💻 safe. Here is what you can do to flag nyxtom:

Unflagging nyxtom will restore default visibility to their posts.