I've been using React for more than a year now and a lot of the time things broke, slowed down our build speeds, and didn't work in the browsers I was transpiling for. I decided to share the lessons I've learned in the hopes they might help others out.

Trying to compile large libraries (like react-plotly or PDF libraries) can take your Webpack compile from seconds to 10 minutes+. If a package is slowing down your compile, consider using a CDN version. We simply used script tags, but there are Webpack plugins that can help with that too:

Try to find a webpack plugin for your dependencies

Just importing packages like moment.js or lodash brings in a lot of bloat that you probably don't need. Try to import what you need only, or better yet find a webpack plugin that removes the unused things from your bundle, because selective imports don't always work. As one example, there's a webpack plugin that removes a lot of the unnecessary bloat added by Moment.js. 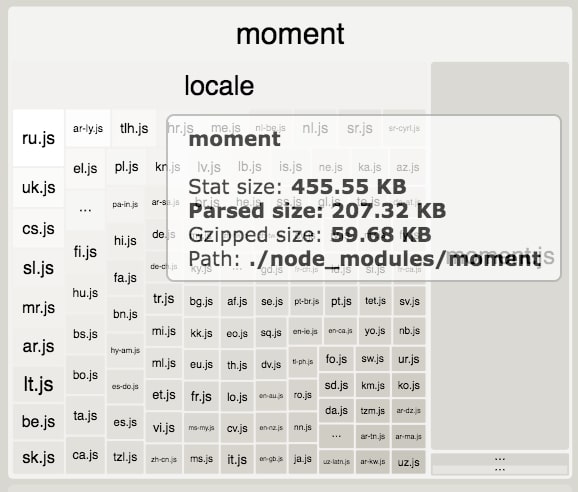 Add es-check to your CI pipeline early on

es-check will help you find out which ES version your bundle is using, it's super useful to find out if you're somehow suddenly not producing ES5 anymore. Even if you're using Babel and browserslist, you might be importing a node module that's not even meant to be used in browsers, or even a package that's not being distributed as ES5. Add es-check to your continuous integration pipeline early on and it should help you find out if your bundle ever stops working with ES5, and that'll help you find which package is the culprit so you can then transpile it.

We had imported a very simple package called hex-rgb that's not even meant for browsers and this tiny package made our bundle not ES5-compatible anymore. Such packages should go through Babel and be transpiled.

In your webpack config, your babel loader's exclude field probably looks like this: /node_modules/ . We need to make a regex that excludes node_modules except the specific ones that should be transpiled:

And once again, this might not be a good solution for large packages as it can drastically slow your build time and you might want to switch to a CDN version instead.

Follow this issue from the babel-loader repo to stay up to date on how to handle cases like this.

Update (01 Feb 2018)
I published a package called are-you-es5 to help out more with this. It gives you easy to read output, and even builds the regex you need for transpiling those specific modules, check it out!

Use Browserslist to specify your target browsers

Browserslist lets you specify which browsers to transpile for.

This simple configuration targets browsers with usage more than 1% global usage, and IE versions 8 and above.

Favor using babel.config.js to configure Babel over .babelrc. If you want to transpile node_modules (which is now becoming a very common case with webapps), then you should use babel.config.js.
.babelrc can be overridden by another .babelrc belonging to a node_module that you're transpiling and that can lead to all sorts of weird issues.

Change your webpack-dev-server config to this

What I hope to see

We need a lot of improvements in our tooling around this process. Most webpack and Babel configs exclude the node_modules folder (with good reason, compilation would take an insanely long time if they didn't!), but I personally feel this is an area where we need smarter tools. It would be quite convenient if everything "just worked" only by configuring Webpack, and Babel along with browserslist without having to dig through dependencies and the often unique problems they introduce to our build pipeline ourselves. The package.json file could be a good starting point towards this goal. There are a couple of things that if used could help tools determine if a package should be tranpiled or not:

Webpack and Babel are awesome, this article isn't trying to say otherwise. We wouldn't be able to use a lot of things if it weren't for them, but the experience of using them together needs to get better. I faced many of these issues over the course of many months and understanding them/finding solutions was incredibly difficult (error messages don't exactly tell you what went wrong and searching for them doesn't always give relevant results), and I hope this article can act as the guide I had hoped to find back then.

Once suspended, obahareth will not be able to comment or publish posts until their suspension is removed.

Once unsuspended, obahareth will be able to comment and publish posts again.

Once unpublished, all posts by obahareth will become hidden and only accessible to themselves.

If obahareth is not suspended, they can still re-publish their posts from their dashboard.

Once unpublished, this post will become invisible to the public and only accessible to Omar Bahareth.

Thanks for keeping DEV Community 👩‍💻👨‍💻 safe. Here is what you can do to flag obahareth:

Unflagging obahareth will restore default visibility to their posts.