I am working on the SPA which is becoming fat and complex due to its (proper and necessary) requirement and difficulty. I want to manage the problems before they become too big to deal with.

In this article, I try to re-introduce the rough structure to the frontend architecture, between the UI components and API access objects, to divide them and ease the complexity. I hope this helps you to organize the problems, to review the code, and to avoid "unnecessary" consideration.

I observed that the practice such as layering, UI component classification, and component composition is widely spread among the community today for the middle size components. By putting the responsibility of the visual to the Presentational Component, the logic/data process is well managed in the Container Component. It reduces the chance of mixing the visual and logic/data process, which leads it to the "legacy" code.

On the other hand, I sometimes feel that there is no good rule nor guideline in the codebase between the UI components and the API access objects. When the logic/data process becomes fat, we would use the library called the Store such as Redux + async plugin, MobX, and (your favorite library) to ease the complexity. Though with that, the store becomes fat/complex too unless there is a good rule. These fatness/complexity usually would not be recognized until the new members point out it or they get confused. It is also the high congnitive load for whom understands codebase well, due to the team mates' change.

I assume that the one of the cause of fatness/complexity, in the large codebase between the UI components and the API access objects, is the mix of the 2 responsibilities in the name of Store.

For example, we assume there is a search page with "Search" button at the center and the facet view at the left, the store with the first responsibility should have the search condition data which indicates the current search result, and the one with the second responsibility should have the search condition draft which indicates the current UI state.

I remember that the past configuration of Redux + async plugin combination usually tends to mix both of them in the same store/module. If they are separated into these reducers, it may be okay.

From here, I call the store with the first
responsibility as Repository and the another one as "UI Store".

There are several technologies, of course, we just use them considering the kinds above. Though there is a right tech in the right place, I think we can choose them freely to the 2 kinds of "Store" (including the choise of the same tech).

Example: Using a data resource of React Concurrent mode as the Repository and using a custome hook as the "UI Store".

When the store layer becomes fat/complex and there are multiple different responsibilities, concerns, or systems in it, they should be separated; draw the dividing line between the Repository and the "UI Store". This is not a new idea. In the application server architecture, we usually follow the rule that separates the presentation layer (the view in MVC) from others. With the exception of the interface/contract, the Repository should not know what happens in the Presentation System, and vice versa. 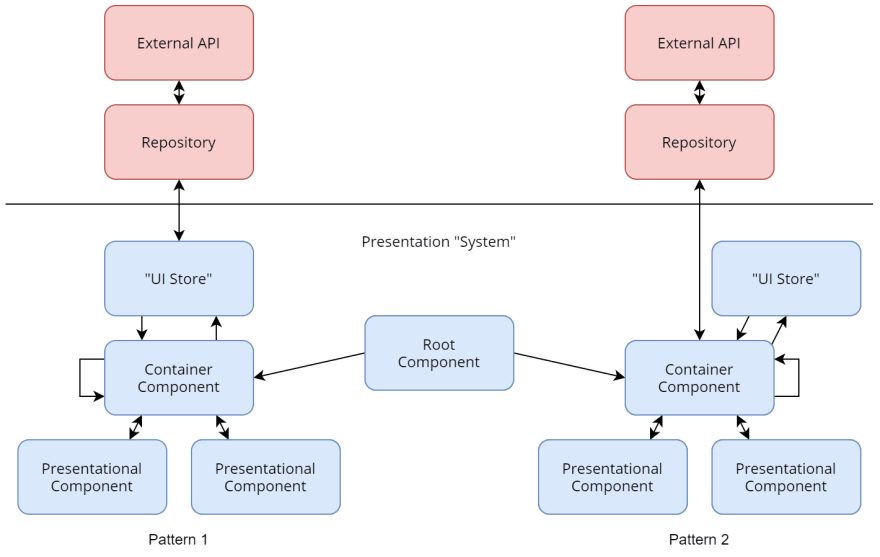 It does not mean better or not, but I just list up possible implementations2. In Pattern 1, "UI Store" is the bridge between the Repository and the Presentation System. In Pattern 2, the Container Component, and stateless hook called in it, combines the data flow from the Repository to the "UI Store".

Though there are other perspectives of dividing codebase, I believe that only few methods conflict with this Presentation System separation. Of course it requires the kind of dependency injection to avoid the conflicts as usual. By separating the Presentation System as the first step, I believe, we can still easily separate the codebase with other perspective and the problem becomes smaller by removing the typical mix of the responsibility first.

I described that we can divide the store into the 2 parts, the Repository and the "UI Store", and the codebase will be simpler if separating the Presentation System from others first.

Once suspended, occar421 will not be able to comment or publish posts until their suspension is removed.

Once unsuspended, occar421 will be able to comment and publish posts again.

Once unpublished, all posts by occar421 will become hidden and only accessible to themselves.

If occar421 is not suspended, they can still re-publish their posts from their dashboard.

Once unpublished, this post will become invisible to the public and only accessible to MasuqaT.

Thanks for keeping DEV Community safe. Here is what you can do to flag occar421:

Unflagging occar421 will restore default visibility to their posts.