Have you ever felt the pain of starting a new React project?

It's frustrating having to start from ground zero each and every time. 😠

If only there was a better way?!

Being a developer I'm plagued with the same disease as everyone else. I hate repetitive tasks and if I can automate something, you can bet I will.

In this step by step guide we are going to explore how we can rewire React's CRA template to create a custom template bundled with our unique setups.

What is a CRA (create-react-app)?

Create React App is an official way to create single-page React applications.
Basically it is a zero-config toolchain that takes away all the hustle with hot reloading, live server and webpack configuration. It’s a one size fits all solution with only the bare minimum to get you up and running as fast as possible.

For the purpose of this guide I will be using a typescript template, but you can choose whatever suits you the most.

The only real difference between the two is typescript.

We will start by taking a look at CRA template provided by the React team.
It contains a template folder and two files template.json and package.json.

Template folder shares the same structure as a normal react app.
It has a public folder with a basic logo, manifest and robots files as well as an index.html file and a src folder where all your source code is.

As far as files go template.json is a file that represents how our package will look (actual package.json when app is created) it contains all our dependencies and scripts.

On the other hand, although a bit counter intuitive for beginners, the package.json file is just a representation of template information not app information. It contains template name, version and template files.

Now that we have covered the basics we can start building our own template.

We will start by creating our project via CRA by running the following command:

We are creating a clean CRA application so we can have a testing environment for our custom tooling instead of cloning one of the two templates locally and modifying it.

Keep in mind that the naming convention has to follow this standard: cra-template-[your_template_name] or in our case cra-template-tailwind-twin-goober.

This way CRA will know that it's an actual template instead of an app. That is a reason why typescript template is named cra-template-typescript.

Note that during installation cra-template prefix is comitted as seen with typescript template.

Navigate to package.json and add the following scripts under scripts section:

These scripts will help us generate our custom template on demand.

Now let's examine each script and what it does.

First on our list is cleanup-template script. This script's job is to clean up the template directory in our project. This one will be very useful for generating new templates over and over.
Next script is generate-dirs. This script is used to generate our folders, starting with template which is our template's route folder then template folder inside of it with source and public folders.
Next up is the copy-resources script. The job of this script is to copy all our files and move them to the template folder following CRA structure.
Last on our list is generate-template script, this one just combines previous scripts into one single execution.
This script will be used each time we want to publish/update our template on npm.

Keep in mind that these scripts are not final and we will be updating them as we progress further in this guide.

We now effectively have the exact same copy of the CRA template as the one used to create our app initially.

You can run locally your template with the following commands:

This is it guys now we have a starting point for our template. Now we can slowly add our tools and customize the template we have already created.

We are going to start by installing ESLint globally with the following command:

We can initialize eslint by running:

You will be prompted with some questions on how you plan to use ESLint.
As this is not really the subject of this guide I will just leave my answers down below.
Feel free to comment down below if you have any troubles with the setup.

That's it 😊 We have completed setting up our linter. All we need to do is include it now in our template resource script. If you navigate to your project root you can see an .eslintrc.json file. This file contains your linting rules.

We are going to add ESLint to our template by modifying our copy-resources script like this: 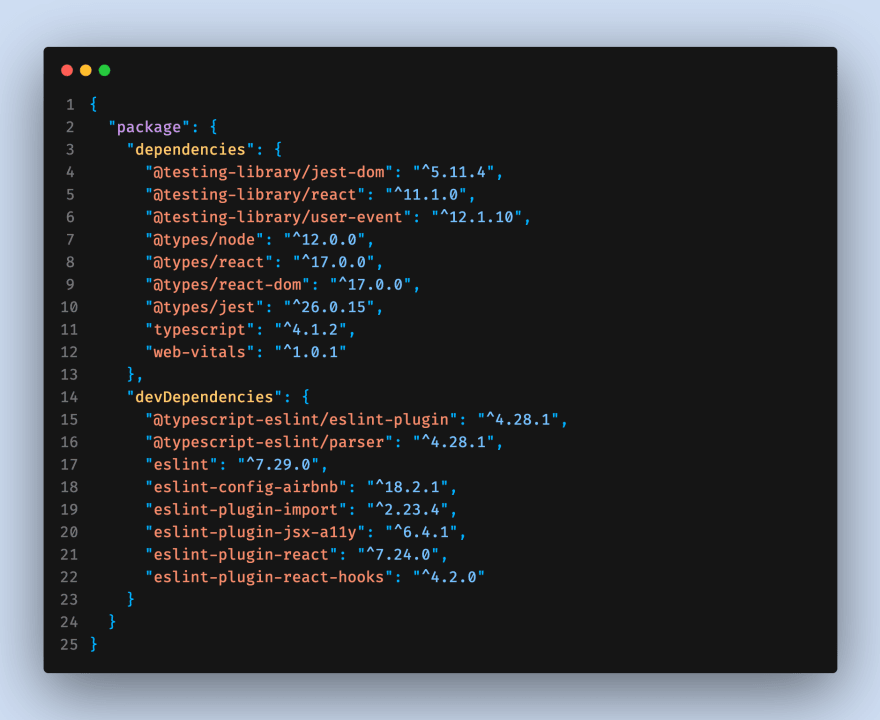 Once the installation is done navigate to the root directory and add .prettierrc.json file.

Prettier configuration is going to depend on your coding style, for the sake of simplicity i will share a link to mine.

We need to modify the copy-resources script as well as template.json and add the prettier with all its dependencies as a resource.

Last on our list is husky. We will use husky together with the power of git hooks to automatically format and fix our files on every commit. Since we don't want all our files to be linted on every commit we will install a small package called lint-staged. Thanks to this package we can lint only staged files.

To install husky and lint-staged run the following command:

After installation update template.json with your new dependencies.

As we can see from the code we added two new fields called husky and lint-staged.
These two fields in conjunction with one another will allow us to achieve our desired effect.

Cool 🎉 🎉. Now whenever we use this template our code style tooling will be ready to go out of the box.

Adding tailwindcss with twin.macro and goober

We are going to use tailwindcss due to the fact that it is a utility first css framework, fully configurable and customisable.
It plays really well with React’s philosophy on component composition hence the reason why it's my css framework of choice.
On the other hand twin.macro unlocks the full potential of tailwind css by allowing us to generate styled components from tailwind utilities. Since this is just a babel plugin it leaves no code behind.

Goober is a fairly new kid on the block. It is a css-in-js library that we will use to help twin.macro generate our styles. The reasoning behind goober is its size or lack thereof. Goober, unlike styled-components of emotion, is around 1kb. Yep you heard me right 🤯🤯.

In order to complete tailwindcss setup we will need a small yet powerful library called craco.
Craco will allow us to reconfigure CRA as needed. We will use it to run postcss with autoprefixer and tailwindcss.

Now let's navigate to template.json. We are going to modify a couple of things here.
First we will add craco as our dependency and then move under scripts section and add the following scripts:

Note: You need to modify package.json as well with the same changes!

Besides that now we need to create a new file called craco.config.js and add the following code:

Next step is going to be initializing tailwind css. Run the following command in your terminal:

This command will create a basic tailwind.config.js file.

Now would be a good time to update our copy-resources script with tailwind and craco configs:

In order for twin.macro to do its magic we need babel as well as babel macro plugin. We will install them by running the following command:

Last but not least install goober by running:

Now would be a good moment to update our dependencies in template.json and add a new field called babelMacros like this:

To complete twin.macro setup we will create a .babelrc.json file with the following code:

Don't forget to add this file to copy-resources script as such:

Now navigate to src/index.ts file and add the following line to import tailwind css base.
While we are here we are going to set up goober as well.

This is it guys. We have finished our template with custom boilerplate code.

This is it people. We are in the endgame now (any MCU fans?).

As the final step let's deploy our template to npm.

Navigate to npm and create an account.(It's free)

After creating an account open up your terminal and run generate-template script.

Once the template is generated we can navigate to template folder in our terminal.

Type the following command to login to npm:

Once that is done now we can publish our package like so:

That’s it guys. Our custom template is ready to be installed.

If you have any questions feel free to comment down below and I will get back to you as soon as I can.

Team ORNIO
The future is exciting. Let’s shape it together.

We’re a small but versatile team. Over the years we have worked in a wide spectrum of sectors such as Healthcare, E-commerce, Telecommunication and Construction.

Once suspended, ornio will not be able to comment or publish posts until their suspension is removed.

Once unsuspended, ornio will be able to comment and publish posts again.

Once unpublished, all posts by ornio will become hidden and only accessible to themselves.

If ornio is not suspended, they can still re-publish their posts from their dashboard.

Once unpublished, this post will become invisible to the public and only accessible to Redžep Murati.

Thanks for keeping DEV Community safe. Here is what you can do to flag ornio:

Unflagging ornio will restore default visibility to their posts.